West Hollywood Mayor Lauren Meister recused herself from the discussion. She said the regular council meeting on Monday, August 15, 2022, was “not a good night for democracy,” via a press release from her campaign mailer. “It looks like censorship is alive and well in West Hollywood… my colleagues on the West Hollywood City Council voted to stand in the way of the democratic process. As has been done for the last 20+ years, the West Hollywood Chamber of Commerce requested that the City of West Hollywood live broadcast its City Council Candidates Forum on WehoTV–however, for the first time ever, Council voted 4 to 0 to NOT televise the Candidates Forum. (You can see the discussion here starting at the 4:50:00 mark. I recused myself from the discussion as to avoid the appearance of impropriety.)”

Keith Kaplan, past Chair of the West Hollywood Chamber of Commerce, also released a statement today in response to the city not televising the annual candidate forum:

“I am saddened that the City of West Hollywood has chosen not to televise this year’s West Hollywood City Council Candidate Forum.  It’s been a tradition for many years.  A healthy community is a transparent community.  It’s important that voters have the knowledge to make wise decisions as to who they would like to represent them in their beloved city.  Withholding information from the voters, is a threat to democracy.”

The Candidates Forum will still take place via Zoom on Tuesday, August 23, from 5:00 pm to 7:00 pm. The Forum will be hosted by the League of Women Voters of Greater Los Angeles and the West Hollywood Chamber of Commerce. Robert Kovacik a NBC 4 news anchor and reporter, will serve as moderator.

The Forum is being planned in partnership with community leaders from 10 neighborhood groups, including:

Three City Council seats will be decided in the upcoming General Municipal Election, which will be held on Tuesday, November 8, 2022. City of West Hollywood Council members each serve for a term of four years and are elected at large. Each year, City Council members select one of their members to serve as Mayor for a year, with the term beginning after the City Council reorganization, which occurs once every year 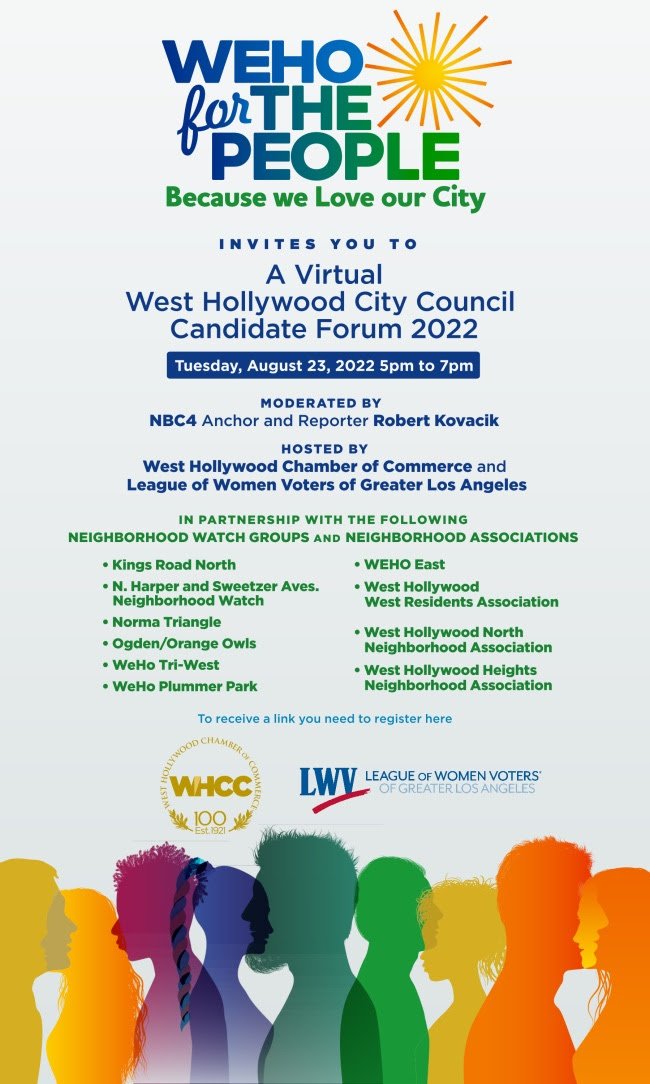 I will say that the City of Beverly Hills did not air the BHCofC Candidate forum either, as they did for the ones put on by the BHSW Homeowners and BH Muni League. But they had no history of doing so. Personally I feel that if candidates accept invitations to take part in the forum then it should be as available for viewing as possible: on the city channel and on the city website.