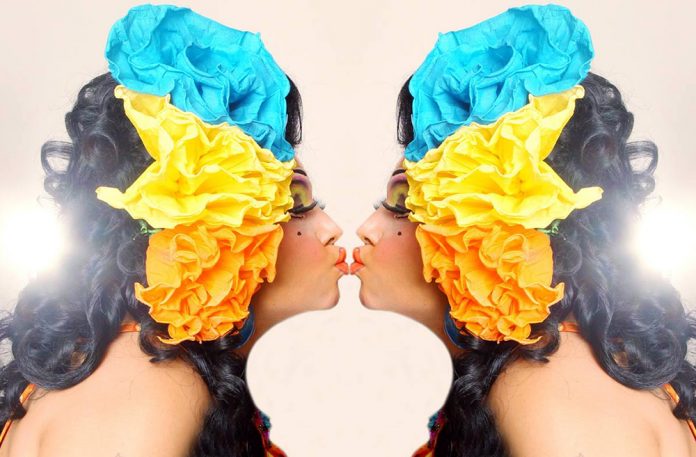 Everyone’s favorite Chico’s Angel, Kay Sedia, is back on stage at The Cavern Club Theater with a spicy new one woman show, “Taco Kisses.” The show will run for a limited 4 shows only the weekend of February 1st & 2nd, 8pm & 10pm.

Taco Kisses is a one woman show that takes the audience on Kay’s journey from the simple streets of Tijuana to her high life as an international fashion model. Her journey is filled with stories, songs and maybe a surprise guest or two.

The bio submitted for this piece goes something along the lines of: Kay Sedia was born in Tijuana, Baja California, Mexico, Kay is the youngest of 18 children and the prettiest of them all–so pretty in fact, she won the title and crown of Miss Tijuana Natural Springs Water, “The water that springs right thru you.” One of her duties as Miss Tijuana Springs was a self-guided, one-woman boat tour of the Pacific Ocean via San Diego. Thought to be dead and lost at sea, Kay emerged back into the border spotlight. It was the charity she founded, “Save the Donkeys,” that let her hometown know that she was O-Kay! She soon became romantically involved with her hunky arresting immigration officer. To prove her love to him, she joined the police academy… and failed. She then turned to high fashion modeling where she could make lots of money using her stylish good looks and charming personality. She had huge success with modeling girdles in the Penny Saver Magazine. After being spotted there, she was asked to join the crime-fighting trio Chico’s Angels.

Kay Seida moonlights and makes a modest living selling Tupperware (www.kaysedia.com) to helpless homemakers. She was spotted trying to help the “The Real Housewives of Orange County” (season 5 episode 9) up their Tupperware game. Kay lives her life as a Detective/Model/Tupperware Sales Lady/Mommy, but demands to be thought of as the most voluptuous and the prettiest Angel of all time. The Cavern Club Theater is located in Sliver Lake, CA. The theater is inside Casta Del Campo Restaurant, located at 1920 Hyperion Ave. Tickets range from $20-$50. Tickets are now on sale at www.kaysedia.com.