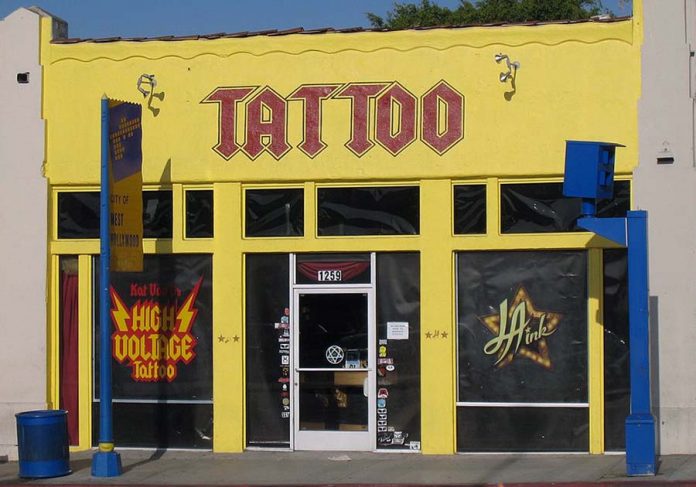 “Goodbye California,” reads a photo on Kat Von D​’s official Instagram page. She announced the upcoming closure of the famed High Voltage Tattoo​ studio located at 1259 N La Brea Ave, in West Hollywood. The tattoo artist and reality TV star rose to fame with her tattoo studio on the TLC reality series LA Ink​. She announced she moved to Indiana and is taking her tattoo studio with her.

“As some of you know, we recently purchased a beautiful home on a bit of land in rural Indiana, and the more time we spend out there we realize we feel more at home there than we do here in LA.

After much thought, we have decided we will permanently be moving to Indiana at the end of this year. We plan on selling our beautiful home here, and I will most likely open a private studio in Indiana once we are done with the house remodel there.

This means that, sadly, I will be closing my beloved tattoo shop @highvoltagetat here in West Hollywood on Dec 1. I didn’t think it would make sense to keep it open if I wasn’t present, and aside from coming back to work on music with my band, we don’t plan on returning to LA very often.

With that being said, we will be celebrating the HvT legacy this next month and a half by tattooing regularly at the shop, and welcome all of you to come and get tattooed by one of my talented fellow artists in the month of November! Appointments are booking up quickly, so I suggest either coming by the shop and setting up time, or going to highvoltagetattoo.com and making your appointment!

I also strongly suggest following my talented fellow artists to see where they end up going in their journey!

I’d like to thank my beloved tattoo family that I’ve had the honor and privilege of working alongside,

And a very special THANK YOU to all you wonderfully supportive folks who have come through @highvoltagetat over the years! Whether you came by to get tattooed, buy a tshirt, or just take a photo and say hi, I adore you for showing my little shop so much love!

Thank you for 14 years of love + tattooing!”

LA Ink premiered on August 7, 2007 on TLC. It follows the events of the High Voltage Tattoo (and, later in the series, American Electric) tattoo studios in Los Angeles. It was a spin-off of TLC’s Miami Ink. In August 2011, TLC announced the cancellation ahead of the mid-season four premiere. However, the show was picked back up by the network, and continued for 3 more seasons. All 7 seasons are available for streaming on Amazon Prime Video.

She’s an anti-Vaxer and her husband is a Trumper. Good riddance.

I didn’t even know this was in West Hollywood. I had to look it up. shouldn’t it be called WeHo Ink instead of LA Ink? Shade.

Weren’t a lot of crimes reported from her little square of West Hollywood?

So many accidents on that corner….along with lots of homeless

The only place in Indiana that I could imagine living is as close to Chicago as possible.