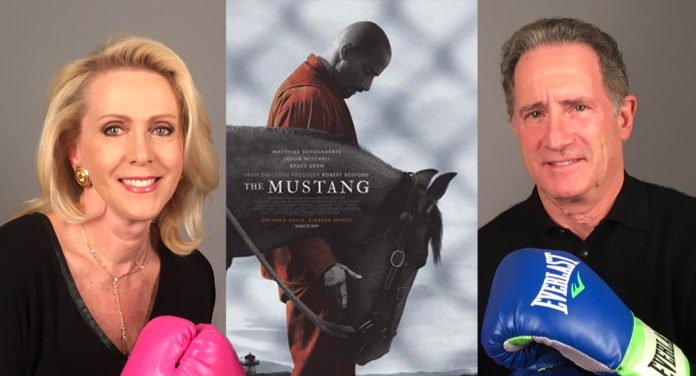 It’s Kaplan vs Kaplan, featuring the his and her movie reviews of The Mustang movie, starring Matthias Schoenaerts and Gideon Adlon.

Jeanne: It is estimated that close to 60,000 (some have the numbers much lower) mustangs roam the public rangelands in 10 western states. Instead of controlling the population by using reversible contraceptives or other methods, the numb nuts who run the Bureau of Land Management round up thousands of mustangs every year.

It’s a brutal process, using helicopters no less, which causes injury and death, then most of the horses captured spend the rest of their lives in long-term holding facilities. Some are adopted and also, since 1990, a few hundred lucky ones are sent to the Wild Horse Inmate Program, where they are trained by inmates, then sold at auction to pay for the programs at each participating correctional facility.

Thus begins THE MUSTANG — and my tears, which didn’t stop until way after the movie was over. Don’t get me wrong, I think the prison programs are extremely worthwhile, but the thought of countless other wild mustangs being virtually imprisoned for life is barbaric. But, I digress —

Matthias Schoenaerts stars as Roman Coleman, a convict in the middle of an 11 year sentence for domestic violence, serving his time in a ruralNevada jail. THE MUSTANG is based on an original idea by French director Laure de Clermont-Tonnerre, who also wrote the screenplay with Mona Fastvold and Brock Norman Brock. Ms. de Clermont-Tonnerre became fascinated after reading about the Wild Horse Inmate Program promoting “animal therapy”, and set out to make her film.

Coleman struggles with intense anger issues. Even the prison psychologist (Connie Britton) has difficulty getting through to him. But he comes to the attention of Myles (Bruce Dern), the horse trainer and person in charge of the mustang program at the prison. Myles is a crusty old cowboy, but he recognizes something in Coleman and coerces him to take part.

Each inmate takes charge of one horse, which he must break and train all within a six-week period before the set date for a public auction. Coleman’s buckskin is a beautiful stallion who suffers from many of the personality traits as Coleman — anger, anxiety, fear and distrust.

Initially Coleman is convinced he can’t handle his horse, at one point violently punching the poor animal. With the help of another inmate, Henry Davis (Jason Mitchell) and Myles, Coleman learns to trust his instincts, and he and his charge, whom he names Marquis, form a strong, loving bond.

THE MUSTANG is not without its faults. There is a subplot running through the film about drugs, which I believe is a distraction, especially since it’s never fully developed. But that aside, de Clermont-Tonnerre has penned a credible screenplay about these prisoners and their horses which clearly demonstrates the value of programs such as these.

It’s been proven that offering such opportunities can facilitate a significant reduction in recidivism. And, the bigger picture, it’s better for the horses, rather than forcing them to languish in pens.

Schoenaerts is almost unrecognizable as Coleman. He’s bigger, more brawny with a shaved head. It’s all part of his total transformation into the anger-laden persona of his character. What I admire most is his reserve in not changing too much through his interaction with Marquis. He becomes less bitter and more comfortable with recognizing his emotions, yet he doesn’t wallow in pity or sentiment. I love his performance and think he is perfect for  this role.

Dern, too, is great. He IS a crusty old cowboy, so it’s only fitting that he play Myles. He’s a father figure to these men he supervises, but he never lets them forget how very special each and every one of their mustangs are — and how they should be treated. Every horse lover will be especially pleased with Myles’ final gesture to both Coleman and Marquis, when the program is unfortunately ended.

Not much can compete with the beauty of the wild mustangs running free as THE MUSTANG begins. They are truly majestic creatures — and some real mustangs were mixed into the group which was used in the film. But, even now as I write this, I cannot stop thinking about the unfortunate ones who have been captured and can no longer run free. It’s heartbreaking, but perhaps, if enough people see this movie and register a complaint with their representatives in Congress, we can change the mismanaged programs currently in place by the Bureau of Land Management. And their budget is being cut, yet again. Just do it — call — and see THE MUSTANG.

David: An uplifting story about hardened criminals working to tame wild horses doesn’t automatically translate into a technically good movie. THE MUSTANG tells such a tale, loosely based on actual events, but the film lacks some genuine pathos, and the editing is second-rate.

Flemish actor Matthias Schoenaerts plays Roman Coleman, a hulking physical man serving an 11 year sentence for domestic abuse. He is taciturn and largely silent in prison, but when introduced to a program where inmates can spend much desired time outdoors trying to break and ultimately train wild horses for eventual sale at auction, he is reborn.

At one point in the film, Marquis — who initially shuns any interaction with humans — approaches Roman sitting alone, and the horse comes into frame by nudging Roman’s head. It’s a sweet moment, but not one that is surprising.

There is a secondary plotline about Roman and his 16-year-old daughter Martha (Gideon Adlon) who is pregnant and they are at odds over the sale of her grandmother’s home. It’s not especially interesting and doesn’t add much to the story.

The buildup to the auction of the now-tamed horses to potential buyers predictably features Roman and Marquis as the final pairing in front of the group. SPOILER ALERT: But writer/directorLaure de Clermont-Tonnerre decided at this juncture to have a helicopter appear out of nowhere. This has such a negative impact on Marquis that the horse reacts violently, throwing Roman, trampling him, and causing the program to be scrapped.

All this occurs because the opening of the movie depicts how the wild horses were initially corralled using a helicopter. So the insertion of the chopper presumably sent Marquis into a rage, but I consider this a huge flaw in the writing. I mean, why in the world was a helicopter suddenly in the sky? It would have been far better to revel in the success of the auction, and more importantly, on the rehabilitation of a guy like Roman.

One interesting note about Jason Mitchell, who portrays Henry. All his life Mitchell had a dread of horses, but the actor decided it was time to overcome his fear. The result is Mitchell’s easygoing and believable approach with the horses in THE MUSTANG.

As for the not-so-great editing, scene after scene seems to be snipped too soon, and the transitions between scenes are frequently sloppy. So THE MUSTANG is a decent little story, but not worth rushing out to see.