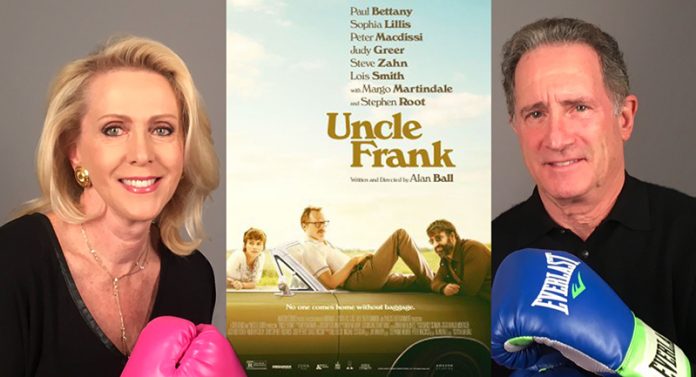 It’s Kaplan vs Kaplan, the his and her movie reviews of the movie Uncle Frank, starring Paul Bettany, Sophia Lillis and Peter Macdissi.

Jeanne: Alan Ball, most known for penning the Oscar-winning screenplay for the 1999 smash hit AMERICAN BEAUTY and creating the two HBO series, “Six Feet Under” and “True Blood”, has written and directed his latest, UNCLE FRANK. Starring Paul Bettany in the title role of Frank Bledsoe, Ball has a crushing story to tell, which he infuses with just enough humor, but the cutting edge of his other work is missing.

UNCLE FRANK opens in 1969 in a very small town in rural South Carolina. Narrated by 14-year-old Beth Bledsoe (Sophia Lillis), her family has gathered for her grandfather, Daddy Mac’s (Stephen Root) birthday. Frank, Beth’s uncle, is visiting from New York City where he is a well-respected literature professor at New York University. It quickly becomes painfully evident that Daddy Mac has little use for his oldest son Frank. But Beth adores her uncle and acts upon the advice he imparts to her that day. And four years later, in 1973, she begins her freshman year at NYU.

Things move very fast in New York for Beth. She briefly acquires a boyfriend — and most importantly she learns that Frank is gay. He has been living with his partner, Wally (Peter Macdissi) for 10 years, a secret only his sister Janis (Hannah Black) knows. When Daddy Mac dies suddenly, Frank and Beth make plans to travel to South Carolina. Wally insists on accompanying them, but is given a definite no.

While driving to their hometown — Beth’s mother, Kitty (Judy Greer) refuses to allow her to fly — Frank and Beth’s conversations resurrect a tragedy from Frank’s past when he was sixteen. Told via flashbacks, we witness this profound event and begin to understand the animosity between Frank and his father — and Frank’s reluctance to return for the funeral — especially with Wally in tow.

It’s unfathomable to speculate how many gay and lesbian people have experienced similar familial heartbreak. Ball, who is gay, had himself gone through a horrifying car accident at the age of 13, which killed his much-loved older sister. The suffering he has endured all these years, plus a story his mother told him about another relative who was “that way” shaped the story behind UNCLE FRANK.

Ball is masterful at assembling the perfect ensemble casts and UNCLE FRANK certainly doesn’t disappoint. Bettany could not be more perfectly cast as Frank. As a professor living in New York he exudes the charm and sophistication one would expect from someone of his tenure. Back at home in South Carolina, things begin to fall apart for Frank, who cannot cope with all the crippling memories.

Bettany’s commanding screen presence is undeniable, whether he’s smiling through Daddy Mac’s complete disregard of his birthday present or the brutal reading of the will immediately following the funeral. As he dissolves at the words of the attorney his pain is palpable — and gut-wrenching.

Lillis has established herself as a key player already and she is utterly engaging as the naïve, but smarter-than-she-looks Beth. I loved her chemistry with Bettany — and Macdissi — their scenes together are strong and credible. Macdissi provides much of the comic relief, but don’t discount the serious side of his performance. Wally loves Frank, despite his faults, and Macdissi makes us believe it.

The rest of the stellar cast includes Steve Zahn as Mike Bledsoe, Frank’s younger brother and Beth’s father, Margo Martindale as Mammaw Bledsoe, their mother and Lois Smith as Aunt Butch. All these highly accomplished actors have assembled to bring Ball’s movie to life — a film he originally thought was about coming out and being gay in the 1970s. In the end he discovered it was more importantly about digging deeper into old grievances, recognizing how we are changed by them and starting anew.

David: Writer/director Alan Ball is an Oscar winner for his screenplay of Best Picture winner AMERICAN BEAUTY (1999) and conceived two of HBO’s biggest hits, “Six Feet Under” and “True Blood”. UNCLE FRANK is his second feature-length film as director, having made TOWELHEAD in 2007.

On the surface UNCLE FRANK is a story about being gay in the 1970’s, coming out to one’s family and dealing with addiction. But Ball based his screenplay about a man consumed with guilt over an event that occurred years earlier. In his own life, Ball’s older sister died in a car accident in which he was a passenger at age thirteen. He believes that people who have experienced a traumatic episode, and avoid summoning their memory of it, can revisit the moment “and embrace what remains with all our being”.

British actor Paul Bettany plays the title character in UNCLE FRANK. It’s a sensitive and moving portrayal that kept me captivated throughout. As the oldest son to Mammaw (Margo Martindale) and Daddy Mac (Stephen Root) who live in rural South Carolina, Frank pretends to be married to Charlotte (Britt Rentschler) even though his parents have never met her. The reality is that Frank is gay and first acted on his instincts at age 16 when he (Cole Donan) and 15-year-old Sam (Michael Perez) had a brief fling. This is revealed in flashbacks by Ball.

Early in the film Frank and his 14-year-old niece, Betty, beautifully portrayed by Sophia Lillis, have a genuine tete-a-tete. Here she decides to change her name to Beth because she loathes “Betty”. Their relationship is obviously special, and Frank tells her she can be whomever she wants to be. Four years later she ends up at NYU — a huge move for a Southern girl from a conservative family — where Frank is an established professor of literature.

Beth attends a party one night at Frank’s apartment and meets her uncle’s roommate Wally (Peter Macdissi), one of those guys who gives everybody a bear hug when he meets them — but nobody seems to mind, they accept it and go on. Wally is Frank’s partner and Macdissi makes him hugely likeable.

I won’t reveal more of the synopsis except to say that a phone call from home in SC demands that Frank and Beth return and Wally insists on going with them. This segment lends itself to comic, even hilarious, moments Ball has incorporated into a dramatic script. The scene in a grungy gas station comes to mind when Beth mocks the flirtatious punk trying to hit on her.

Bettany, Macdissi and Lillis are all skillful and share an authentic chemistry essential to UNCLE FRANK’s effectiveness. The supporting cast consists of cinema veterans each of whom have a moment of distinction in their roles. Ball clearly has a true knack for character development.

Steve Zahn plays Frank’s brother Mike, and his “two-word” response in a scene with Frank is unexpected, and for me is the highlight of the film’s dialogue. Martindale imparts maternal wisdom as Mammaw that is very touching while Root’s homophobic father portrayal is deeply disturbing. Judy Greer is Mike’s wife Kitty — Greer is always a gem on the big screen — and her acceptance of Frank is heartfelt. And new nonagenarian/ long-time character actor Lois Smith rounds out the field as Frank’s Aunt Butch who basically expounds what one might expect from an elderly Southern woman who learns her nephew is gay.

UNCLE FRANK is rife with humor, pathos and even some suspense wrapped up in a finely-honed screenplay. It’s an impassioned tale packed into a concise 94-minute frame. Notable performances from a solid ensemble cast manage to hit all the right notes.

What could have deteriorated into sappy melodrama keeps us engaged as we witness one individual’s courageous battle to overcome self-incrimination and “embrace what remains” of his being.

WeHo Wonderland Drive Thru Experience on January 30th Has Been Cancelled

WeHo’s The Standard Hollywood Hotel Bids Farewell After 22 Years on...

Faultline Bar Owner Confirms Our Report that the Bar is in...