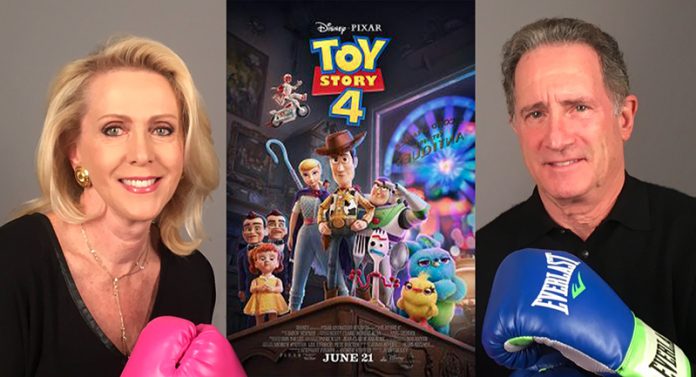 Jeanne: Hands down — the best film of 2019 —so far — but I can’t imagine any movie overtaking TOY STORY 4. The geniuses at Disney/Pixar have managed to make us love these characters even more than before as they delve into the adventure of a lifetime on a road trip with their new kid, Bonnie (voiced by Madeline McGraw), and her parents.

Sheriff Woody (voiced by Tom Hanks) has always known his place in life. He’s a toy — and he was a very special possession of his boy, Andy. But at the end of TOY STORY 3 when Andy boxes up the entire gang and takes them to Bonnie, Woody, Buzz Lightyear (voiced by Tim Allen) and the rest undergo a lot of changes.

Bonnie doesn’t play with her toys the same way as Andy — and Woody is no longer the favorite. Day after day, he is passed over by Bonnie in favor of others like Jessie (voiced by Joan Cusack). But when Bonnie is facing kindergarten orientation, Woody senses her real fear and jumps into her backpack to make sure he’s there if she needs him at school.

What Bonnie does that day is make herself a new toy out of a spork from the trash. She names him Forky (voiced by Tony Hale), and she is smitten. Unfortunately, Forky doesn’t understand that he’s a toy — he thinks he only belongs in the waste basket.

It becomes Woody’s task to make him understand the importance of his new role. And when Bonnie’s parents announce an RV road trip before school begins, it is up to Woody to make sure that Forky stays put — which is way more difficult than it sounds.

After Forky makes a break for it at a rest stop, Woody tries to get him back in the camper, but it’s too late. He and Forky are forced to hoof it to the next town where Woody knows the family will be spending the night at an RV site. But a familiar lamp in the Second Chance Antiques shop catches Woody’s eye — and in a moment of weakness, he and Forky enter a world from which they barely escape.

Woody’s old friend Bo Peep (voiced by Annie Potts), who was given up by Andy’s sister, Molly, years ago, has been surviving and flourishing as an independent toy with her three sheep sidekicks. She, Ducky and Bunny (voiced by Keegan-Michael Key and Jordan Peele), Giggle McDimples (voiced by Ally Maki) and Duke Caboom (voiced by Keanu Reeves — the best new character) come together to help Woody and Forky escape the clutches of Gabby Gabby (voiced by Christina Hendricks), who only wants Woody for his voice box.

As you can tell, there is a lot going on in TOY STORY 4. We’ve had a couple of films thus far in 2019 that have addressed various life issues and good lessons for both children and adults. A DOG’S JOURNEY and THE SECRET LIFE OF PETS 2 come to mind. Now TOY STORY 4 is expounding on some of those and adding more. We are reminded of the rewards of facing challenges and adversities, the love of friends and family and the fact that change, though sometimes we don’t like it, is always happening.

In this fourth and final chapter of these beloved toys, we are treated to their wisdom, hilarity and triumphant spirit all over again. Woody, who has always been a leader, has become the father figure to the rest of these loveable playthings. Buzz, though a smaller role for him this time, still has Woody’s back and the two of them share a deep devotion. Having Bo Peep back is fantastic. She was always one of my favorites, with her wry sense of humor and great fondness for her handsome cowboy with a badge.

Hanks, Allen and Potts are so in sync — and so brilliant as these delightful, warm and loving characters. It’s been 24 years of voicing some of the best writing in animation history, especially for Hanks and Allen. But never once have these actors — or any of the others — failed to bring their utmost best to these memorable stories. Hanks isWoody — and it is widely felt at Pixar that no one could have brought him to life better. Plus, you simply CANNOT miss Reeves as Caboom — he’s awesome!

And, as usual, with Pixar, there are so many little touches that make their animated movies stand out. One minute you’re laughing hysterically when the toys take over driving the RV, the next you’re sobbing when a small child lost at the carnival finds a “lost” doll, only to be reunited with her mom and dad. It’s a roller coaster of emotions for certain, but I wouldn’t change any of it — it’s PERFECT!

I simply cannot stress enough the importance of seeing this extraordinary film. Everything — the set designs, the animation, the special effects, the music — is superb. And it’s the last time you’ll be able to see these fantastic toys together!

David: I don’t ever remember applauding after one of our screenings, but after watching TOY STORY 4, I did just that. In fact, I turned to our daughter sitting between Jeanne and me and told her that very thing. There is a first time for everything.

This fourth in the series by Disney/Pixar is at least as good as TOY STORY 3, and that was a remarkable achievement. TOY STORY 4 has so many great things going for it. Most of the original cast is back — see Jeanne’s review for the breakdown — along with a couple of newbies like Keanu Reeves’ Evel Knievel-type character, Duke Caboom and Christina Hendricks’ Gabby Gabby.

The animation in these films is always amazing but the writing in TOY STORY 4 is beyond brilliant. A host of writers are credited, including Andrew Stanton, a double Oscar-winner for FINDING NEMO and WALL-E. So many funny lines and dialogue exchanges aimed at adults abound that young children will be perplexed as to why their parents are laughing.

Here’s just one example. The newest toy is named Forky (Tony Hale)  created in kindergarten by Bonnie (Madeline McGraw), the newest child toy owner replacing Andy in TOY STORY 3. He’s not very aware, initially, but along the way, Forky and Woody (Tom Hanks) share an adventure. At one point, Woody tries to explain to Forky what a merry-go-round is and Forky exclaims “Oh, you mean a carousel?” The audience cracked up.

I guarantee that TOY STORY 4 will make you laugh — a lot — and cry — and laugh some more. As Jeanne mentions in our video, there are many life lessons for little ones, with Forky proving that even the most unappealing physical representation of a toy can be tremendously adored. Yes, despite one eye larger than the other, popsicle sticks for feet, a pipe cleaner for arms — remember this was the creation of a toddler in kindergarten — a lot of kids will be asking mom and dad for the stuffed version of Forky. Our 25-year-old daughter purchased her own Forky immediately after the screening at LA’s famous El Capitan Theatre.

I would be remiss on a couple of counts if I didn’t mention the following. Woody and Bo Peep (Annie Potts) meet again after many years. Their reunion is a priceless part of the story. And Keegan-Michael Key and Jordan Peele — you know them as Key and Peele — are simply awesome as Ducky and Bunny, two plush animals who are, at one point, seemingly stuck forever as carnival prizes on ashelf. They are later joined by Buzz Lightyear (Tim Allen) on an adjoining wall — very inventive stuff!

At the risk of gushing too much over TOY STORY 4 — it is nearly at 100% on Rotten Tomatoes — let’s just say I would welcome another viewing. Two weeks ago, after we saw Ron Howard’s splendid documentary PAVAROTTI, I declared that to be my favorite movie of 2019 thus far. But that opinion was short-lived as TOY STORY 4 has supplanted it as my top pick.