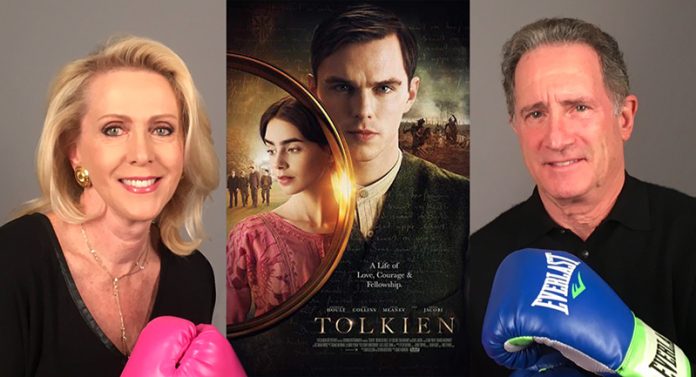 Let’s go to the movies with Jean and David Kaplan of Kaplan vs Kaplan. Here they review the movie Tolkien, starring Nicholas Hoult, Lily Collins and Mimi Keene.

Jeanne: J.R.R. Tolkien (John Ronald Reuel Tolkien — pronounced Tol-keen), the well-known and highly-regarded author of “The Hobbit” and “The Lord of the Rings”, among other works, was orphaned at the age of 12. TOLKIEN features his friendships with three chums he meets at school and his life-long love, Edith Bratt.

Writers David Gleeson and Stephen Beresford chose to focus on Tolkien’s early life, in a possible attempt to demonstrate who, why and what most influenced him when creating his many tales of fantasy. Harry Gilby plays the youthful Tolkien, while Nicholas Hoult is the adult Tolkien. He and his brother, Hilary (Guillermo Bedward), are home-schooled by their vivacious mother, Mabel (Laura Donnelly), who then dies suddenly after moving the boys from the country to Birmingham, England. Fortunately, Mabel secured the guardianship of Father Francis Morgan (Colm Meaney), who was able to place them in the care of Mrs. Faulkner (Pam Ferris), and garner them scholarships to schools.

It is at King Edward’s School that Tolkien meets Christopher Wiseman (Ty Tennant as a boy, Tom Glynn-Carney as an adult), who invites Tolkien to join his group of friends for tea at the Barrow’s Stores. The others are Robert Q. Gilson (Albie Marber – boy, Patrick Gibson – adult), the headmaster’s son and Geoffrey Bache Smith (Adam Bregman – boy, Anthony Boyle – adult), Tolkien’s closest friend who was a poet. The foursome named their group the T.C.B.S., standing for the Tea Club and Barrovian Society.

And while the movie was forging these strong bonds with his classmates, he was also establishing his relationship with Edith Bratt (Mimi Keene – girl, Lily Collins – adult), Mrs. Faulkner’s companion, who lived in the same house and played the piano for her. Eventually going off to Oxford and then serving in World War I, placed strains on his relationships with all of the aforementioned.

TOLKIEN is a lovely period piece with a marvelous soundtrack by Thomas Newman. This was a passion project for director Dome Karukoski, who had dreamed of creating a biopic of Tolkien since he was a boy. Karukoski believes that Tolkien’s writing was influenced by a profound love of languages — he spoke many and made up a few — religion, his friendships and especially his love for Edith, who was the inspiration for the character Lúthien Tinúviel, an elf who appears in several of Tolkien’s texts and whose story is told to Frodo by Aragorn in “The Lord of the Rings”.

Hoult is so perfect. Gilby is equally good as the young Ronald, his mother’s name for him. But Hoult is absolutely beautiful — and has been since his debut in A SINGLE MAN — and mesmerizing as this brilliant thinker and creator who adores his wife and loves his family. Hoult was hilarious in last year’s THE FAVOURITE and here he is elegantly quiet and thoughtful. The scenes of Tolkien engaged in World War I are particularly memorable — at once horrific, terrifying — then so moving because of his obsession with finding his friend, Smith, the poet. He is one of the most watchable young actors working today.

Collins and Hoult have great chemistry — she is sublimely adorable. It’s a good role for her, allowing for counteraction with someone aligned with the same intensity. She simply possesses exactly the right temperament and beauty for period pieces.

For it to be a good film, it is all about the writing, and Gleeson and Beresford have penned a wonderful script. The interactions between Tolkien and his boyhood friends are engaging and believable. These four young men have managed to form an impressive bond, despite the various circumstances of their backgrounds. In the same vein is the relationship established between Edith and Tolkien. We want them to be together and find happiness.

It’s really unfortunate that Karukoski’s film isn’t faring better on Rotten Tomatoes. It’s a beautiful movie well worth the time and emotional investment. Plus, David managed to stay awake, so that’s a clue right there that it is an excellent experience.

David: The early life of J.R.R. Tolkien (pronounced Toll-Keen) may not appeal to the average moviegoer, and even devout fans of “The Hobbit” and “The Lord of the Rings” may not feel fulfilled with this movie. Instead TOLKIEN is a showcase for the writer’s early years featuring a strong performance from Nicholas Hoult in the title role.

The younger Tolkien (Harry Gilby) and his little brother Hilary are orphaned because their mother Mabel (Laura Donnelly) dies at an early age. We then follow Ronald, as he was called, to his tenure at a British upper class school. He and three other boys form a club they call the T.C.B.S. (Tea Club and Barrovian Society), intoning a unique chant when the mood strikes. The actors playing both the younger versions of themselves, and later as they get older and all attend Oxford, are very capable in their roles.

Their bond could have lasted a lifetime, but World War I had a lot to do with that. TOLKIEN shifts frequently from the present day to some horrific scenes of Ronald and others at the battle of theSomme in France during the Great War. But much more of the movie revolves around Ronald and his love affair with Edith Bratt (Lily Collins).

His feelings for Edith run deep and she responds in kind. But obstacles interfere with their potential plans for marriage. First, Father Francis Morgan (Colm Meaney), the priest who was the guardian for the Tolkien brothers after their mother’s death, forbids Ronald from seeing Edith until he turns twenty-one, and Ronald feels compelled to obey.

When Ronald enlists in the army after England is engaged in the war, Edith fears he will not return alive and breaks off their relationship. Collins, who most recently is seen as Fantine in the PBS non-singing version of “Les Miserables”, is on a par with Hoult for her acting. She is lovely and engaging.

We learn about Tolkien’s fascination with language and how early on he invents his own. This, of course, becomes a focal point of his creation of Middle Earth. But TOLKIEN has precious little insight into his works of fiction that made him a world-renowned author. Only the utterance of a single word by Tolkien at the very end of the movie provides a clue about his future body of writing. Can you guess what that word is?

This is not a film that will appeal to the average moviegoer. Jeanne loves period pieces and this is no exception. Occasionally slow and deliberate, I can still recommend TOLKIEN as something to enjoy at home.