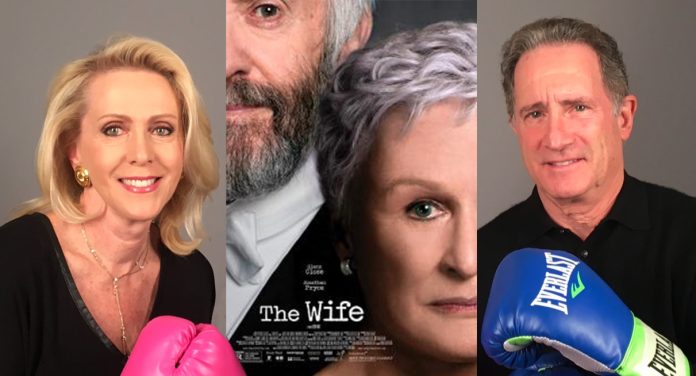 Jeanne: I may be in the minority, but I do not like THE WIFE. Yes, Glenn Close delivers a marvelous performance as Joan Castleman, the silent spouse of literary darling Joe Castleman (Jonathan Pryce). And though Meg Wolitzer’s novel of the same name, upon which this movie is based, is described as “witty and acclaimed”, I did not find THE WIFE at all amusing or urbane.

Joe and Joan have been married for almost 40 years. They met at Smith College in the 1950s when Joan (played here by Annie Starks) was a student and Joe (Harry Lloyd) was her married writing instructor. Joan harbored her own desires of becoming an author and she already displayed a rare talent for it.

However, it is Joe who is destined for the limelight after Joan helps him perfect his first novel, which is readily published by Joan’s employer after she and Joe are married and living in New York City. Now it is 1993 and he and Joan are anxiously awaiting news of a possible Nobel Prize for Literature.

I realize it was the 50s and things were difficult for women, but not insurmountable. After a brief encounter with a marginalized female writer (Elizabeth McGovern) while still at Smith, Joan decides that she will never have an opportunity to become accepted as a novelist and relegates herself to assisting Joe.

This particular plotline of THE WIFE makes me incredibly angry — then incredibly sad. Yes, it was hard for women — and still is in many ways. But, if Joan was as talented as we come to find out, I think she would have/could have broken through the barriers. After all, the early part of the 20th century produced many notable female writers, such as Virginia Woolf, Agatha Christie, Harper Lee, Sylvia Plath, Doris Lessing and Maya Angelou, to name just a few.

And even if Joan didn’t start writing novels immediately upon graduation from college, why didn’t she begin after their two children were older? Well, we learn the answer to this question and others, which I won’t divulge — but, in all honesty, it wasn’t that difficult to figure it all out.

I sound like I’m ranting a bit — and I am. I loathed Joe. He is decidedly two-dimensional although Pryce gives a very strong performance, I couldn’t past the limitations of Joe’s character. Granted Close will most likely receive an Oscar nomination for playing Joan — and she deserves it. The seething below the surface is palpable and Close is absolutely spot-on in her portrayal. She is at her best when she is at her slyest.

Max Irons plays their son, David, also a writer. He’s a morose soul, mainly because his father withholds his approval — or any opinion of  his writing. He drove me to distraction with his petulance. I seriously wanted to throttle him. Perhaps, in that way, Irons does do a good job.

Christian Slater has a small but pivotal role as Nathaniel Bone, another author who has been hounding Joe about a biography. He has a great scene with Close in a bar. The two of them played off each other better than Close did with Pryce. I did not like the coupling of Close and Pryce.

Alas, THE WIFE is a critics’ darling. I, however, cannot agree despite Close’s powerful turn. I just wanted to slap someone when I left the theater. Poor David —

David: Here’s hoping Academy Awards voters do the right thing and honor Glenn Close with the Oscar that is long overdue. Okay, Jeanne, I know it’s early, but based on her performance in THE WIFE, at the very least she’s a lock for a nomination. And I’m pretty good at predicting these things, although you don’t have to be a genius to recognize Close’s extraordinary work here.

She has been nominated SIX times before for the coveted statuette, which makes her the best actress never to have won an Oscar (for the record, she’s won three Tonys and three Emmys). In THE WIFE, her portrayal of a woman who eschews her own writing career to support her husband’s is a marvel.

For most of the film, Joan Castleman (Close) is tight-lipped, smiling occasionally. Early on, she rejoices with her husband, Joe, of nearly 40 years (Jonathan Pryce), after he learns in a phone call that he’s won the Nobel Prize for Literature for his body of work. The pair jump up and down on their bed like two kids celebrating a raise in their allowance. The bottom line is that Joe is brash and exuberant, Joan is the strong silent type.

Through flashbacks we learn how young Joan (Annie Stark, Close’s real-life daughter) fell for young Joe (Harry Lloyd) while she was in college and he, a married man, was her teacher. Her aspirations to be a writer are all but quashed when she chats with a bitter novelist named Elaine Mozell (Elizabeth McGovern) who warns her about the pitfalls of a female writer wannabe. It’s McGovern’s only appearance in the movie, but it’s a pivotal one.

Joan and Joe are now in Stockholm awaiting the Nobel Prize ceremony with their son, David (Max Irons). He’s an aspiring writer himself who hasn’t received the attention nor encouragement from his father, creating a sizable rift in their relationship. Joan, conversely, is very supportive, which will mean more to David in the end.

All the actors in THE WIFE are sensational. Pryce could conceivably get a nod from the Academy for his work, although I’m not convinced his part, as critical as it is to the plot, was all that difficult. Maybe he just makes it look so easy. Close, meanwhile, displays a simmering explosiveness lurking just beneath her stoic exterior. Much of Joan’s quiet seething has to do with Joe’s extra-marital encounters over the years. This includes a young, attractive photographer, played by Karin Franz Körlof, assigned to follow Joe’s every move while in Stockholm.

One of the best scenes in the film has Joan and Nathaniel Bone (Christian Slater), a writer who wants to do a biography on Joe — authorized or not — having a drink. Nathaniel is seeking inside information on Joe, even affirmation and approval from Joan. At one point in the conversation, Joan not-so-playfully accuses him of flirting with her. I think Slater’s turn is exceptional — he is disarming in every scene. Joe detests him, but I don’t believe audiences will find him to be the obnoxious pest Joe thinks he is. I found his character very likeable and entertaining, although a bit smarmy at times.

THE WIFE is a totally consuming, dialogue-driven story that places the viewer squarely in the center of Joan and Joe’s stormy relationship. Swedish director Björn Runge collaborated with Jane Anderson, a triple Emmy winner, who adapted her screenplay from the book by Meg Wolitzer.Anderson says that Runge is “the most feminist of male directors”, and that despite conventional wisdom, a female director was not necessary to effectively stage what is essentially Joan Castleman’s story.