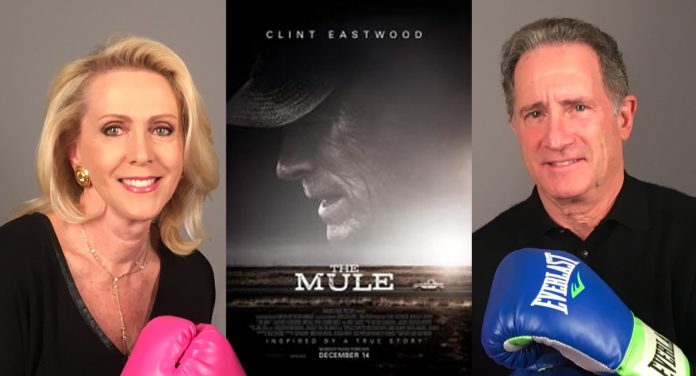 It’s Kaplan vs Kaplan, the his and her movie reviews. This week, our movie buffs take on The Mule, starring Clint Eastwood.

Jeanne: In a purely self-aggrandizing move, Clint Eastwood not only directs and produces THE MULE, he stars in it, as well. The film is based on The New York Times article “The Sinaloa Cartel’s 90-Year-Old Drug Mule” by Sam Dolnick, which detailed the true story of Leo Sharp, a WWII veteran in his 80’s who was a courier for the cartel.

We first meet Earl Stone (Eastwood) in 2005. He has a thriving business growing beautiful flowers and is known for his generosity to everyone but his family. His daughter, Iris (Alison Eastwood), is getting married again and has promised his granddaughter, Ginny (Taissa Farmiga), that he will be there. But his ex-wife, Mary (Dianne Wiest) knows he won’t, as he’s missed every important date in Iris’ life.

Moving ahead to 2017, Earl has lost his business because of the internet and his farm has been foreclosed. He makes a casual acquaintance at his granddaughter’s engagement party who suggests he just “drive” to make some quick money, and before long he’s on his 12th trip. He has become a Mexican cartel’s most reliable mule moving millions of dollars of cocaine through the U.S.

I’m stating this right here, right now — Clint Eastwood needs to retire. THE MULE is one of the worst films of the year. It’s nothing more than a vehicle for Eastwood to have a good time singing and cavorting with much younger women. It’s him driving along listening to music for most of the film.

The fact that others such as Bradley Cooper, Laurence Fishburne, Michael Peña, Wiest and Andy Garcia all have small roles is no consolation. The disastrous screenplay by Nick Schenk doesn’t afford anyone other than Eastwood the opportunity to actually act.

The writing — and it’s all about the writing — is inane and pedestrian. If poor Fishburne, who plays Cooper’s boss, had to utter “Go get ’em” one more time to Cooper’s character, it would have set a record.

The most egregious factor in this film is that there is literally no tension. From the trailer, it appears that there will be a big showdown when Cooper’s character finally corners Earl. Nope — nada — not so much. BORING!

Seriously, though, it was having to watch Eastwood always — except for one brief time — dancing with the pretty, young girls. And I especially love that they seemed to flock to him. Gag! And one scene has him being “treated” by the cartel boss (Garcia) to a bevy of women at a pool party, then selecting one to take Earl to bed. Ewww. So unnecessary to watch Eastwood on a bed with two practically naked young women — totally disgusting.

I don’t care if you’re an Eastwood fan, THE MULE simply isn’t worth the time and the money — it’s awful!

David: Despite a couple of major flaws in the script of Clint Eastwood’s latest film, THE MULE, I’m willing to overlook them because I was entertained by his performance as well as the plot. I wasn’t so charitable when Eastwood’s MILLION DOLLAR BABY won multiple Oscars 14 years ago, including Best Picture, even though a contrived mishap in the ring led to Hilary Swank’s character being paralyzed — but I digress.

Clint cast himself here as Earl Stone, a 90-year-old Korean War veteran and horticulturist who loses his business late in life. A brief conversation at a family affair leads him to a group of drug dealers, part of a Mexican cartel, who hire him to transport cocaine and pay him piles of cash for every trip he makes. THE MULE is based on a true story, and by now you know that Jeanne despised this film, but I actually liked it.

One sign of a decent movie: when it’s predictable yet still creates some doubt in the moviegoer’s mind as to the outcome. Earl Stone loves the limelight and he regales in it when his local community bestows an award on him for his small flower enterprise. Once he starts raking in the cash for his drug deliveries, he spends freely. He buys himself a fancy new pickup truck —black, that’s important; he rebuilds a local VFW hall that had a fire; and he provides the open bar at his granddaughter Ginny’s wedding (Tassia Farmiga, Vera’s younger sister by 21 years).

Meanwhile, the wealthy crime boss who runs this particular cartel, Laton (Andy Garcia), wants to meet this nonagenarian of his drug business who we learn is transporting record volumes of cocaine while eluding the law. This leads to Laton’s primary underling, Julio (Ignacio Serricchio) tailing Earl to make sure he doesn’t stray from his normal route to the motel parking lot where he disappears for an hour while the cartel members remove the drugs from the back of his pick-up.

Now for the writing miscues. First, it takes Earl several trips to realize he’s carrying illegal drugs in his vehicle. Earl Stone is portrayed as a very savvy guy, so this just doesn’t add up. If that isn’t bad enough, consider this — the feds on his trail — Colin Bates (Bradley Cooper) and an unnamed DEA agent (Michael Peña) — are looking for a black pick-up. And Julio knows this, yet does nothing to have Earl drive a different vehicle or maybe have his black truck painted a different color.

THE MULE makes up for a lack of suspense — other than a stop by a state trooper which Earl defuses — with a down-home performance by Eastwood. I even enjoyed his singing along with the radio to tunes by crooners like Dean Martin and Willie Nelson. Eastwood’s real-life daughter Alison Eastwood plays his estranged daughter Iris, while Dianne Wiest is his ex-wife Mary. So THE MULE inserts some family issues and ultimate regrets by Earl. It’s not overdone, just naturally portrayed by all. As for humor, Iris has the film’s best line when — SPOILER ALERT — at his trial, Earl stands up amid his attorney’s pleadings to admit his guilt and be sentenced to prison, prompting Iris to quip “At least we’ll always know where you are!”.