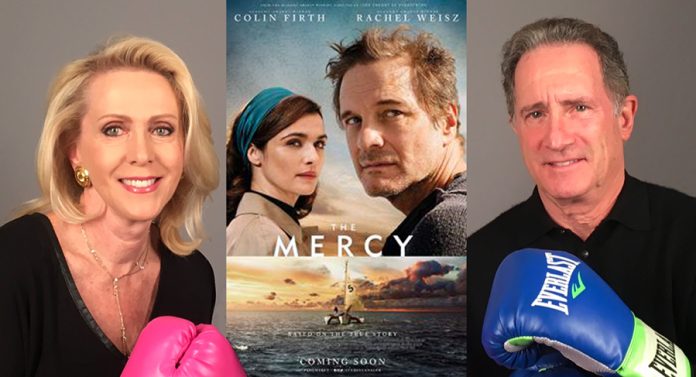 Our movie reviewers, Jeanne and David Kaplan, give us their hers and his point of view on the movie The Mercy starring Colin Firth and Rachel Weisz.

Jeanne: Colin Firth stars in THE MERCY as Donald Crowhurst, an amateur sailor in Britain in 1968 who, against all odds, competes in the Sunday Times Golden Globe Race. This true story, written by Scott Z. Burns and directed by James Marsh, recounts the events of this single-handed, round-the-world yacht race which offered a hefty cash prize of 5000 pounds.

Crowhurst, only a weekend sailor, has invented the Navicator, a handheld device which could take bearings on marine and aviation radio beacons. Though it was a nifty and useful tool, sales were slow and his business was failing. He regarded the race as a way to fix his financial troubles and bring fame to his close-knit family.

Though Clare (Rachel Weisz), his wife, was opposed to his plan, she supported him and was prepared to face the next six months alone with their children. What she did not know was how totally unprepared both Donald and his boat, Teignmouth Electron, were prior to his departure. The adventure was a disaster from the very beginning with Donald eventually forging his daily logs to cover up his sailing failure.

Colin Firth is truly one of my all-time favorite actors, but the script by Burns is sorely lacking in any real emotional depth. Both Firth and Weisz are capable of so much more than what is presented here. One never really senses the desperation Clare must have intuitively felt — nor her grave despair when all contact with Donald is lost.

And, as for Donald’s plight, there is virtually no sense of urgency when things go wrong from the start. I am not faulting Firth in this observation, it is clearly the result of poor writing.

THE MERCY is not a bad film, but because of the fact that it’s based on a rather sad true story, it should have been so much more compelling. It boasts beautiful cinematography by Eric Gautier and a lovely score by composer Johann Johannsson, one of his last.

For me, THE MERCY is worth a viewing simply because of Firth and Weisz. Instead of a riveting account of a desperate man driven to record misleading reports of his sailing accomplishments, THE MERCY is a bland biopic which doesn’t do justice to the actual story.

David: Often we watch films with characters who appear to be on the verge of an heroic achievement. When such a film has British actor Colin Firth at its center, we anticipate a satisfactory ending. But such is not the case with THE MERCY, based on the life of Englishman Donald Crowhurst, an amateur sailor who, in 1968, wanted to be the first person to circumnavigate the globe without stopping.

When people read the synopsis of this film, or watch the trailer, inevitable comparisons may be made to ALL IS LOST, the Robert Redford movie from 2013 about a man alone at sea. In THE MERCY, Firth indeed plays a man alone on a boat in the ocean, but his experience is based on a true story.

Despite solid performances from Firth and Rachel Weisz, who plays his wife Clare, I can’t heartily recommend this film. The main question here is why do some people tackle a seemingly impossible task, like sailing around the globe in a small vessel designed for a single person? Why would a happily married man with a loving wife and three adoring children risk losing it all?

Directed by James Marsh (THE THEORY OF EVERYTHING, and Oscar winner for the 2008 documentary MAN ON WIRE), THE MERCY suggests that perhaps an over-zealous press could apply too much pressure on a pioneering individual. Achieving such results are basically unrealistic and could literally drive someone like Crowhurst out of his mind.

We know that Crowhurst unsuccessfully marketed his own navigational device for sailors to use as a high-tech compass, so perhaps he thought a successful journey would bring with it credibility for his invention. I will say that THE MERCY is, at times, an interesting examination of the quest that compelled Crowhurst to leave his family for an anticipated six months.

Firth gives a very credible impression of a man totally alone — except for the occasional contact with his family — in the middle of an ocean. And he performs some of the required physical stunts, like climbing the mast to fix a ballast bag. Firth actually was hospitalized during filming for a dislocated hip.

As told by Marsh and screenwriter Scott Z. Burns, Crowhurst’s saga, even after managing to overcome serious obstacles, takes a rather shocking turn. But the reality is that moviegoers’ expectations and hopes are not always fulfilled.