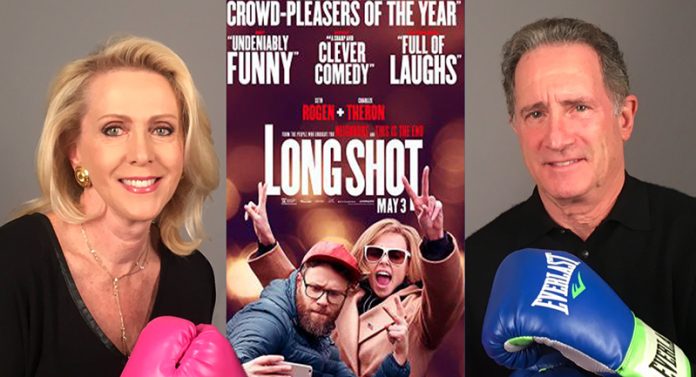 It’s Kaplan vs Kaplan, the his and her reviews of the movie Long Shot, starring Charlize Theron and Seth Rogen.

Jeanne: Charlize Theron and Seth Rogen star in what would definitely be considered a LONG SHOT. When the pairing of these two was announced for the leads in a romantic comedy, one could only wonder how this would all play out. Surprisingly — not bad. Theron and Rogen actually exude a natural chemistry that is neither forced nor fake.

Charlotte Field (Theron), the current Secretary of State of the U.S. under President Chambers (Bob Odenkirk), was Fred Flarsky’s (Rogen) babysitter when he was 13 and she was 16. They meet again in a highly unlikely situation, after Fred has quit his job as a journalist, because his outlet is purchased by a media mogul, a la Rupert Murdoch, named Parker Wembley (Andy Serkis).

Against the advice of her key staffer, Maggie Millikin (June Diane Raphael), Charlotte hires Fred as a speechwriter in an effort to mix some humor with her talking points, as she has decided to run for president. And while it seems a little farfetched, Charlotte and Fred develop a bond which turns romantic.

Good comedies are very difficult to pen — great comedies are almost impossible. Screenwriters Dan Sterling and Liz Hannah try their best, but, predictably they get caught in the inevitable trap oftoo much bathroom humor.

The story by Sterling has its merits — a knockout workaholic who never has time for relationships falls for someone she feels comfortable with — and he makes her laugh. All of that works, especially because Rogen can be so self-deprecating and seemingly a sweetheart. He’s smart, he’s fun and he tries so damn hard to be a good sounding board/friend.

Unfortunately, Sterling and Hannah choose, on occasion, to go gross — and they really didn’t need to do that. They have enough humor going on with their other stronger bits. Charlotte wanting to get

“f*#ked up” in Paris turns hilarious when a hostage “situation” develops and the two of them are high on mollies. Some may find the scene silly, and possibly ridiculous, but I think Theron pulls it off with aplomb — she’s a hoot.

The supporting cast adds a great deal to LONG SHOT. Raphael is as terrific here as Maggie as she is playing Jane Fonda’s snarky daughter on “Grace and Frankie”. She delivers the sly wit riddled with sarcasm astutely. And Tristan D. Lalla is quietly amusing as Agent M, Charlotte’s Secret Service bodyguard. He doesn’t talk much except for his one liners, but his expressions say everything.

suave — and single. Everyone thinks that he and Charlotte would make a great match. And their tango showcase in Argentina is sexy, but alas, James is a doofus with a goofy laugh. C’est dommage —

Theron is also a producer on LONG SHOT. She’s no dummy — this is an excellent vehicle for her — and she has never been more stunning. She is certainly one gorgeous woman — her hair, makeup and designer attire are all perfect. LOVE the emerald green gown she wears to deliver one of her speeches, and the red dress she wears to tango — WOW!

David: LONG SHOT succeeds on more levels than it falters. There are plenty of chuckles, but also some questionable sequences — more on that in a minute.

The most notable aspect of the film has us believing that a guy like Fred Flarsky (Seth Rogen) can actually end up with a woman like Charlotte Field (Charlize Theron).  The second best part of this movie is that Ms. Field, behind the astute performance by Theron as Secretary of State/presidential candidate, acts and sounds more professional than most of today’s politicians.

LONG SHOT starts us off with Flarsky, an ultra-liberal journalist, infiltrating a skinhead meeting where phrases like “F**K the Jews!” are the group’s standby. As he reluctantly agrees to a swastika tattoo on his arm, he is found out, and amid threats to do him harm, Flarsky crashes through a third story window, lands on a parked car, and subsequently hits the sidewalk, face first. Of course, he gets up with hardly a scratch. And this is supposed to be funny? A later major plot development involving self-gratification, which I’m sure Jeanne has mentioned, could probably have been eliminated in favor of something else.

Nevertheless, LONG SHOT is undeniably contagious as we watch the development of these two characters and their unlikely pairing. Personally I would have liked Fred to shave off, or at least trim, his ghastly beard. What is also undeniable is Theron’s beauty — she has never looked better, and she wows in all of her scenes.

Of the remaining cast members, June Diane Raphael stands out as Field’s primary assistant, Maggie. She instantly doesn’t like Fred, but despite her misgivings and attempts to thwart his interaction with her boss, he ultimately grows on Maggie. Jeanne and I know Raphael from TV’s “Grace and Frankie” where she plays a daughter of Jane Fonda’s Grace with great comedic flair. Andy Serkis also excels as Parker Wembley, an obnoxious media mogul who tries to blackmail Field.

Posters and billboards around LA abound with the movie’s tagline “UNLIKELY BUT NOT IMPOSSIBLE”. This pretty much sums up the theme of LONG SHOT, but let’s give credit for the two very good turns by Rogen and Theron that make it happen.