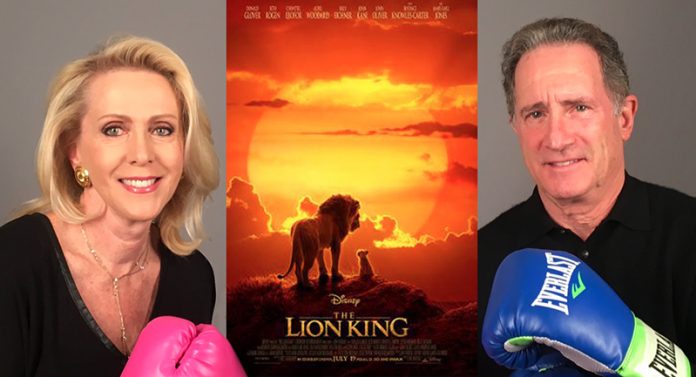 It’s Jean and David Kaplan of Kaplan vs Kaplan with their movie reviews of the The Lion King, starring Donald Glover, Beyoncé, Seth Rogen.

Jeanne: Director Jon Favreau has assembled a who’s who list of cast and crew to bring his blended version of THE LION KING to life. Combining live-action filming techniques with photoreal computer-generated imagery, and utilizing environments designed within a game engine, Favreau and his collaborators are able to navigate a virtual set as if they are actually on set in Africa. And the results are amazing!

Unless you’ve been living under a rock since the original animated release landed in theaters in 1994, everyone already knows the story of King Mufasa (voiced here and in the original by James Earl Jones), his wife, Sarabi (voiced by Alfre Woodard) and their precious young son, Simba (voiced by JD McCrary). This iconic tale has it all; power, deceit, betrayal, tragedy, family drama, but most importantly THE LION KING is a story about love.

Favreau has great respect for this property and was determined to maintain its original splendor while employing all the new technological advances to make it his own. There has been much discussion about the necessity for Disney remaking their classics, but often people/critics fail to remember that there is a whole new generation of children who are being introduced to these beloved characters.

Overall, I think Favreau does a marvelous job, much like he did with THE JUNGLE BOOK in 2016, which also received its fair share of backlash. Honestly, I wish we could stop this haranguing. Disney is not about to halt this trend, as MULAN is scheduled for Spring of 2020.

And, as much as I firmly believe movies should be judged on their own merit and not be compared to the predecessor, there are just a few things I missed from the original. I loved grubs “taste just like chicken” — and Pumbaa lamenting he ate like a pig, and Timon reminding him “Pumbaa — you are a pig!”, which were excluded here. Seth Rogen is terrific voicing Pumbaa, but I must admit that I really missed Nathan Lane as Timon. Billy Eichner just didn’t do it for me. Timon’s subtle showstopper “Talk about your fixer-upper!” falls flat when Eichner delivers it.

Donald Glover and Beyoncé Knowles-Carter voice grown-up Simba and Nala. They’re both great singers, obviously an understatement regarding Beyoncé, but for me, I found her speaking voice too mature for Nala. Instead of sounding like Simba’s girlfriend, she comes across more like his mother.

Chiwetel Ejiofor voices Scar, Mufasa’s ne’er-do-well, jealous brother, and John Oliver shines as Zazu, the hornbill who has Mufasa’s ear and is tasked with watching over young Simba and Nala (voiced by Shahadi Wright Joseph). McCrary and Wright Joseph are absolutely outstanding as the energetic cubs. I enjoyed them the most.

Don’t listen to all the naysayers. THE LION KING is fantastic family entertainment on a majestic scope. The memorable songs by Elton John and Tim Rice, and the outstanding score by Hans Zimmer remain mesmerizing. And Pharrell Williams produces five songs on the soundtrack. It’s an experience you won’t want to miss — no matter how many times you’ve seen the 1994 version.

David:  In some circles, director Jon Favreau’s version of Disney’s THE LION KING is being criticized for a lack of emotional display by the animals portrayed in the film. For me, that was never an issue. It is still amazing technology that certainly captures the gist of the original animated movie from 1994.

What is most important is that Favreau and his immense crew have captured the majesty of Mufasa (voiced by 86-year-old James Earl Jones), the grace of Sarabi (Alfre Woodard), the complexity of Simba (Donald Glover), the beauty of Nala (Beyoncé Knowles-Carter), the evil of Scar (Chiwetel Ejiofor), the humor of Zazu (John Oliver), the wisdom of Rafiki (John Kani), and the delightful rapport between Timon (Billy Eichner) and Pumbaa (Seth Rogen). Disappointingly, a couple of the memorable lines between the loveable meerkat and wart hog have curiously been omitted.

For much of the early part of the film, we are treated to young Simba (JD McCrary) and young Nala (Shahadi Wright Joseph). Their child-like wonder at the elephant burial ground and the subsequent threat from the hyenas are well conceived. THE LION KING features gorgeous cinematography by six-time Oscar nominee Caleb Deschanel and music by 10-time nominee Hans Zimmer (he won in 1994 for his original score of THE LION KING). The fight scenes are well choreographed and do not overstay their welcome. Rogen is a standout as the voice of Pumbaa and Ejiofor is appropriately threatening as Scar.

Some older moviegoers may complain that there is nothing new in Favreau’s production, but I would argue what would these critics change? It has been 25 years since the original animated version, which means there is a whole generation of youngsters who will certainly be wide-eyed and enthralled with this version.

For me, when you’re the parent of a toddler who probably watched the original 40 or 50 times, this may eliminate any surprises and dilute the effectiveness of the 2019 film. Nevertheless, Favreau’s THE LION KING is still — undeniably — solid entertainment.