Kaplan vs Kaplan Movie Reviews: THE HOUSE WITH A CLOCK IN THE WALL Starring Jack Black 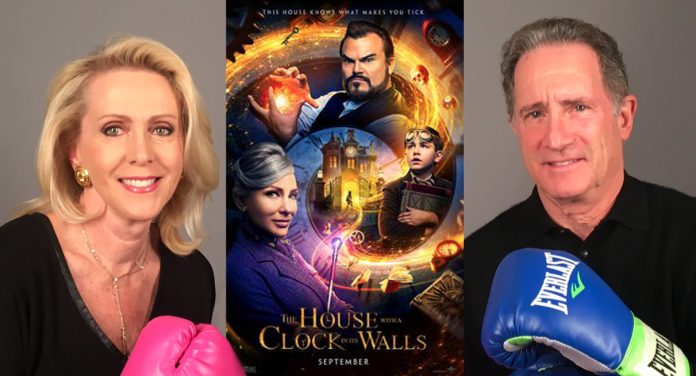 Jeanne: A tragic car accident sends 10-year-old Lewis (Owen Vaccaro) to live with his warlock uncle, Jonathan Barnavelt (Jack Black) in a massive old Victorian house chock full of clocks — THE HOUSE WITH A CLOCK IN THE WALL  — all shapes, all sizes.

Jonathan’s purple-obsessed neighbor, Florence Zimmerman (Cate Blanchett), is a witch in her own right. Together the three work feverishly to find the clock in the walls of the house, which could bring about Doomsday, left behind by the evil warlock, Isaac Izard (Kyle MacLachlan), and his sinister wife, Helena (Renee Elise Goldsberry).

THE HOUSE WITH A CLOCK IN THE WALL is the perfect vehicle for Jack Black. With age has come a certain calmness — Black is not nearly as frenetic as he once was — but he has not lost any of his immense entertainment value. I absolutely love his energy here — along with the sweet empathy for his best friend, Florence, and the nephew he now clearly adores.

But what’s really intriguing is the pairing of Black with Blanchett. Who knew? It’s a stroke of genius — and so nice to watch Blanchett in a non-hyper sensitive role. She literally glides through THE HOUSE WITH A CLOCK IN THE WALL as if she’s the good witch she’s portraying — it’s delightful. She and Black make a surprisingly impressive team.

Ultimately, the success of THE HOUSE WITH A CLOCK IN THE WALL  depends upon young Vaccaro — and he delivers! His youthful exuberance is charming. Not only is he adorable — but he can cry believably. This kid is a star  — he’s already been in four previous films. Watch for him!

Alert: THE HOUSE WITH A CLOCK IN THE WALL may be too terrifying for young children. There are more than a few truly frightening scenes which could be nightmare inducing. Parents — consider yourselves forewarned.

David: I can’t think of an actor more suited to the role of Jonathan Barnavelt than Jack Black. He plays a warlock (involved with magic and sorcery) in 1955 Michigan, and he lives in a house that is overrun with clocks of all kinds. Not only that, there is a stuffed chair that moves and pants like a dog, a player piano that stops with a wave of the hand, and other silliness. But it’s all part of the fun in THE HOUSE WITH A CLOCK IN THE WALL, the oddly named film based on the book by the late John Bellairs, who died 27 years ago.

To complement Black in this fantasy/comedy/horror spectacle, Cate Blanchett is his friend and neighbor, Florence Zimmerman, who also possesses some special powers. The two of them are actually fun to watch as they play off one another with ease, but that is not the whole story.

What really makes THE HOUSE WITH A CLOCK IN THE WALL effective is the performance of diminutive 12-year-old Owen Vaccaro. He plays Lewis Barnavelt, Jonathan’s nephew, whose parents died in a car accident. Young Vaccaro is perfect with his facial expressions and reactions to the strange house and all its denizens.

Director Eli Roth cast his real-life wife Lorenza Izzo to play Lewis’ mother. She shows up in several scenes as a back-from-the-dead specter to talk to her son. That part is a bit hokey, but Roth, who first distinguished himself with the highly successful CABIN FEVER  sixteen years ago, is rapidly becoming the king of horror in Hollywood.

THE HOUSE WITH A CLOCK IN THE WALL is entertaining enough, and it is reasonably original. As the movie’s villain, Kyle MacLachlan’s make-up is superb. But parents be warned — some of the film’s content is too horrific for young children under age five. Let me sum it up with this observation — just in time for Halloween, kids won’t look at jack-o-lanterns in quite the same way.