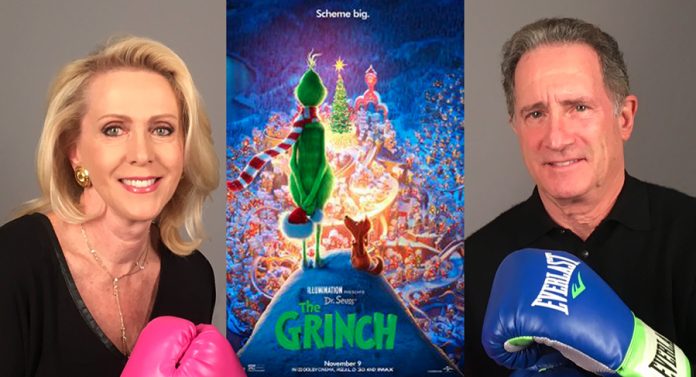 Jeanne: Christmas is nearing, so the Grinch is back — trying to steal their beloved holiday from the Whos in Whoville. Voiced by Benedict Cumberbatch, sans British accent, the Grinch is still a big green curmudgeon who has HATED Christmas for 53 years in THE GRINCH.

In the 2018 version, we learn that the Grinch has loathed this festive day ever since he spent his childhood in the Whoville orphanage with no family or anyone to celebrate Christmas. Naturally, he grew to dislike the day, eventually retreating to Mt.Crumpet, overlooking Whoville. As an adult, he resides in a rather luxurious, gadget-filled cave with his faithful, adorable dog, Max.

As he plots to steal Christmas from Whoville, a sweet little girl named Cindy Lou Who (voiced by Cameron Seely) is transfixed with the idea of meeting Santa Claus. She is convinced Mr. Claus is the only one who can help her save her mother, Donna Lou (voiced by Rashida Jones) from a life of drudgery, working day and night to provide for her and her baby brother.

It all collides on Christmas Eve when Cindy Lou does manage to ensnare the Grinch as he has only one house left before stealing the entire Whoville Christmas. Will her kindness prevail — or will the Grinch manage to get his wish — to ruin Christmas Day for everyone in Whoville?

First off — David is not a fan. But seriously, “who” — no pun intended — cares? THE GRINCH was not written and conceived for him. It is intended to enrapture and entertain small children, like the ones in our screening who were belly laughing throughout.

I’m not stating that this is the best Christmas film I’ve ever seen — far from it.  The narration by Pharrell Williams is uninspiring. He could have punctuated the rhyming so much better — making for a far more enjoyable adaptation of the brilliant Dr. Seuss’ work.

But THE GRINCH has a solid message — let us love one another, no matter their faults — and family, friends and love are the most important things in our lives. Had a few more Republicans espoused these sentiments, perhaps they wouldn’t have lost the House — but, I digress. (“Who” am I kidding? — nothing could have helped them — they were too far gone.)

THE GRINCH is colorful, delightful fun — for the little ones. And “who” doesn’t love a decent film all about the best holiday of the year — Christmas?

David: The best thing I can say about THE GRINCH are the billboards liberally sprinkled throughout Los Angeles. They quote sarcastic comments attributed to the Grinch, accompanied by his big, green, smirking character. Example1: (at a major intersection) “I love it when the light turns green and nothing moves”. Example 2: “Another day of sunshine?”

THE GRINCH in the film (Benedict Cumberbatch) is not nearly as mean as the billboard promos. In fact, this installment in the series should logically be the final one since the Grinch takes a page from Ebenezer Scrooge and discovers the true meaning of Christmas — family and love. Where could another sequel possibly go from there?

Other than that, THE GRINCH is fine for little ones. A few five-year-olds at our screening were giggling. But the movie presents nothing new in terms of the Grinch’s reputation for grouchiness at Christmastime.

Danny Elfman’s music — the famed composer who happens to have the perfect name for this particular film — is very good, and the opening frenetic city scenes of Whoville preparing for their favorite holiday are fun, but that’s about it. I agree with Jeanne that Pharrell Williams’ narration is less than compelling — it should have been more poetic in the traditional Grinch style.

Parents can take their toddlers to this picture and not worry about anything too scary. Just don’t expect much in the way of entertainment for adults.