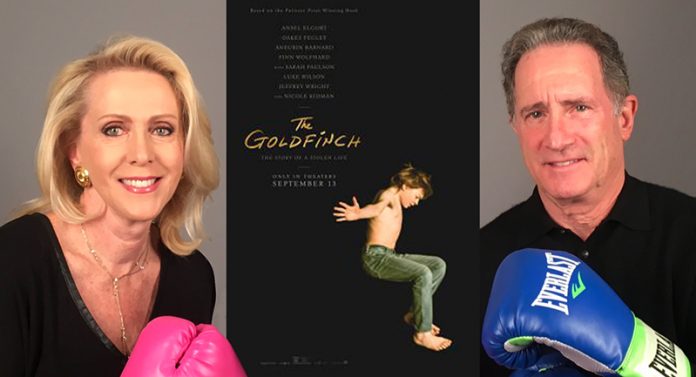 It’s Jeanne and David Kaplan of Kaplan vs Kaplan  with the his and her movie reviews of the film The Goldfinch starring Finn Wolfhard, Sarah Paulson and Aneurin Barnard.

Jeanne: Not having read Donna Tartt’s 2014 Pulitzer Prize winning novel, “The Goldfinch”, David and I are unable to compare it to the new film directed by John Crowley. A little research reveals the book is 784 pages, so even at 149 minutes, Peter Straughan’s adapted screenplay is not able to cover that much text in a meaningful way.

And therein lies the problem with THE GOLDFINCH. The story of Theo Decker (Oakes Fegley), a 13-year-old who loses his mother in a bombing at the Metropolitan Museum of Art, and the continuation of Theo’s (Ansel Elgort) life as an adult, is an uneven, disjointed affair. Told via flashbacks and flash forwards, Straughan’s script is all over the place, jumping from one fragmented aspect of Theo’s dramatic upbringing to another.

Through a series of unfortunate events, Theo finds himself constantly uprooted. And the parade of characters who populate his life all influence the adult he becomes. The constant in Theo’s existence is a painting, “The Goldfinch”, which he removed from the museum after the bombing. It is a source of comfort for poor Theo, until he does the unthinkable.

Fegley and Elgort each bring a resolute tenderness to the role of Theo. Fegley is particularly earnest in his desire to bring this tragic boy to life. And though I like Elgort’s portrayal, occasionally he does spend too much time staring off into space — more the fault of the director than Elgort.

In this fairly large cast of accomplished actors, several other performances stand out. Nicole Kidman as Samantha is quietly elegant and effective as the matriarch of the Barbour family, who takes Theo in right after his mother’s untimely death. She has always had a regality about her and here it is fully on display as she glides through the upper East Side apartment in Manhattan inhabited by her brood. It’s not a large role, but it is hugely pivotal.

Finn Wolfhard of “Stranger Things” is brilliant as Boris, an abused immigrant boy whom Theo befriends in Las Vegas, and introduces Theo to a whole new world of drugs. He possesses a lovely, expressive face and as Boris, he takes full advantage of the power of his expressions.

I like his portrayal much better than his counterpart — older Boris played by Aneurin Barnard. It’s never a good thing when the accents don’t match from a younger character to the older version, but that is only one complaint. Whereas Wolfhard delivers a more nuanced performance, Barnard’s is too intense, at times over the top.

Jeffrey Wright is also compelling as James “Hobie” Hobart, Theo’s mentor/guardian, and eventually his business partner. He delivers a lovely performance and has a few of the better moments in THE GOLDFINCH with both Fegley and Elgort.

THE GOLDFINCH isn’t a terrible film. It’s beautifully shot by Roger Deakins. The scenes inside the Barbours’ “perfect” apartment and Theo’s hotel room in Amsterdam are exquisite, especially the snow falling as Theo gazes out his hotel window. And the haunting soundtrack by Trevor Guerckis adds a great deal to the experience.

But, all in all, THE GOLDFINCH misses the mark as a film suitable for recommendation. It’s entirely too long, and at one point, I was wondering if it would ever wrap up. I can only imagine that Tartt’s book is much better. Perhaps I’ll give it a try.

David: One of my favorite movies in recent years was WOMAN IN GOLD in which a painting plays a major role and has a huge impact on everyone involved. Now along comes THE GOLDFINCH featuring a painting that also has a definitive influence on people. But the similarity ends there.

Based on a 784-page best-selling novel, THE GOLDFINCH is a complex story that likely does not do the book justice (neither of us read it), even in a 2 ½ hour film. The movie is full of flashbacks centering on Theo Decker, a young boy of 13 whose mother is killed in a museum bombing. Since it would require way too much space to explain the synopsis, even Jeanne doesn’t try.

Despite the film’s lack of cohesiveness, I believe the performances outweigh that negative factor. I also found the movie intriguing — at least some of the time. On the other hand, some of the scenarios are convoluted, so THE GOLDFINCH is far from perfect. But the cast is very good, especially Oakes Fegley as the younger Theo and Ansel Elgort, the adult Theo.

My favorite character is an antique restorer named Hobie. He is played by Jeffrey Wright — not an actor I normally admire — but his performance is almost heroic. Hobie is passionate about his craft and compassionate as he welcomes a desperate young Theo — and his adorable dog — into his home.

Another standout is Finn Wolfhard (“Stranger Things”) as young Boris, Theo’s best friend who introduces him to drugs. I also liked Aneurin Barnard as the older Boris when Theo is now in his twenties. Both actors bring a continuity and intensity to the character of Boris that is authentic.

THE GOLDFINCH’s other cast members include veterans Nicole Kidman, Luke Wilson, Sarah Paulson and Denis O’Hare. They all have memorable roles in this story. Kidman plays Samantha Barbour, a mother whose sympathy for young Theo’s plight is palpable as she and her husband take Theo into their home after the museum blast. Wilson is Larry, Theo’s estranged father, who has a gambling and drinking problem. His treatment of Theo culminates in a shocking scene. Paulson plays Larry’s floozy girlfriend, Xandra. And O’Hare is always magnetic in his usual supporting roles, here as an antique buyer who feels he has been fleeced.

THE GOLDFINCH has some flaws. At one point, thugs show up unexpectedly in a garage in Amsterdam while Theo and Boris are examining the Goldfinch painting — and they steal it from the duo. Who would stand alone in a dark garage with such a valuable piece of art? It’s like they were waiting for something bad to happen. Just plain dumb —

Perhaps director John Crowley (BROOKLYN, 2015) was overly ambitious taking on this massively detailed story. Nonetheless, the film has substantial merit and moviegoers should judge for themselves.