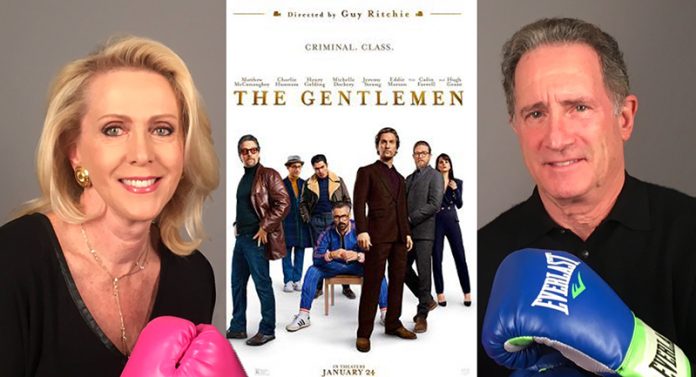 It’s Jeanne and David Kaplan of Kaplan vs Kaplan, giving us her and his view of the movie THE GENTLEMEN, STARRING Charlie Hunnam, Matthew McConaughey, and Michelle Dockery, directed by Guy Ritchie.

Jeanne: A highly entertaining bit of naughtiness from Guy Ritchie and his extraordinary cast makes THE GENTLEMEN the first fun movie of 2020. Ritchie has had the idea for this movie quite a while — almost 10 years, originally considering it as a television series. His ongoing interest in the British slang term “toff guys” referencing someone from an aristocratic background who exudes a certain je ne sais quois led him to the premise for THE GENTLEMEN.

Mickey Pearson (Matthew McConaughey) has built himself quite an empire in the U.K. profiting from the sale of marijuana. He’s an ex-pat who came to London 20 years earlier, studied at Oxford and stayed to develop marijuana farms.

His purpose is twofold — he rents the land for a million pounds per year from the aristocracy who desperately need the money to maintain their estates, thereby helping them — and secondly creating “skunk” farms beneath the land to grow his weed undetected. Now this empire is for sale for the tidy sum of $400 million and he has a willing buyer.

Ritchie devises a grand scheme which plays out like a movie within a movie. There’s a crooked private investigator, Fletcher (Hugh Grant), who works for a tabloid editor, Big Dave (Eddie Marsan) who has a major grudge against Mickey. Mickey’s right-hand man or “consigliere”, Ray (Charlie Hunnam), is not your typical British gangster. He’s prim and proper and may have an OCD issue.

Michelle Dockery plays Rosalind, Mickey’s “tough broad” wife, who runs a business of her own, but always has Mickey’s ear. And Colin Farrell shows up as Coach, a boxing instructor who mentors a group of young, disadvantaged guys who would be considered hoodlums if not for him. Henry Golding is cast against type as Dry Eye, an Asian crime lord who wants to play in the big league. And Jeremy Strong rounds out the motley crew as Matthew, the other American crime boss who’s interested in buying Mickey’s holdings.

I thoroughly enjoyed THE GENTLEMEN. At a time when there isn’t much to laugh about on the world stage, it’s so refreshing to experience a movie that makes you forget all that. As much as I enjoyed KNIVES OUT, I like THE GENTLEMEN even better. It’s bloodier to be sure, but I’d much rather watch McConaughey any day rather than Daniel Craig.

Plus, I just love Dockery as the matriarch of her husband’s massive business. He may be brutal to everyone else, but to her, he definitely takes a back seat. It’s hilarious, especially when he’s constantly asking her “any chance?” — looking for her positive response to sex. And Dockery is perfect for this role.

In fact, the entire cast is awesome. Grant, who has seriously broken out of some sort of shell since his fantastic turn in PADDINGTON 2, is amazingly good as the effeminate P.I. trying to bed Ray. I love him — he’s a riot. Farrell, too, is a hoot. He’s obviously a very versatile actor, but I adore him best when he’s a thug — reminds me of IN BRUGES and HORRIBLE BOSSES.

David and I are two of the very few critics who admired Ritchie’s 2019 ALADDIN. It was a Disney extravaganza which we really enjoyed. But he’s at his best when he’s creating the British gangster action comedy, THE GENTLEMEN. It’s a great deal of  fun with some well-timed surprises. It will most definitely take your mind off your current woes.

David: Yet another high-quality January release in movie theaters? THE GENTLEMEN features superior writing by director Guy Ritchie, who has followed up his underrated ALADDIN with a truly entertaining film.

With players like Matthew McConaughey and Michelle Dockery, it would be hard to fail. They are husband-and-wife Mickey and Rosalind Pearson. In the seedy world of drug dealing, Mickey harvests giant farms of marijuana worth millions. But he wants out, as in retirement, and there is no shortage of greedy, slick millionaires who want to take over his operation.

Rosalind is no angel, either, running her own auto business. In this role, Dockery is as far removed from her Lady Mary persona on “Downton Abbey” as possible. Her office scene when threatened by a thug named Dry Eye (Henry Golding) is perfectly choreographed. As for Golding, he is decidedly not the nice guy from CRAZY RICH ASIANS or LAST CHRISTMAS. His character is a scary dude.

Hugh Grant plays a sleazy private investigator named Fletcher who thinks he can blackmail Mickey to the tune of $20 million. Just when it looks like Fletcher has it all figured out, Raymond shows him the many flaws in his plan. Grant is incredible in this portrayal, delivering his lines flawlessly and hilariously while he believes he has the upper hand.

Another suitor for Mickey’s illicit weed business is a nerdy-looking American named Matthew (Jeremy Strong) with a trophy wife. Ah, the power of money! Mickey wants $400 million, but Matthew thinks that’s way overpriced. These two characters have an amazing conversation about what the sale price should be, and that chat is another highlight of THE GENTLEMEN. Let’s just say that a freezer set at 25 degrees below zero figures into the negotiation.

This is one film where Jeanne cannot complain about the writing.

The plot is intricate, clever and replete with surprises. It’s a role made for McConaughey. Mickey and Rosalind have an interesting

marital relationship, but she clearly has the upper hand. If Mickey has the slightest inkling that he might get lucky with his wife, he asks her “any chance?” Of course, most married men, if they’re honest, will admit this is not only a truism in this film.

THE GENTLEMEN also showcases the supreme cinematography by Alan Stewart. The mere sight of Fletcher patting the couch so Raymond will sit next to him — overtones of Fletcher’s suggested homosexuality? — is a small touch that has an impact. I particularly appreciate the extreme close-ups of the actors’ faces in many instances, adding so much more to the movie’s engaging dialogue. And the entire supporting cast of thugs adds realism and excitement — albeit violent — in a film that is never boring.