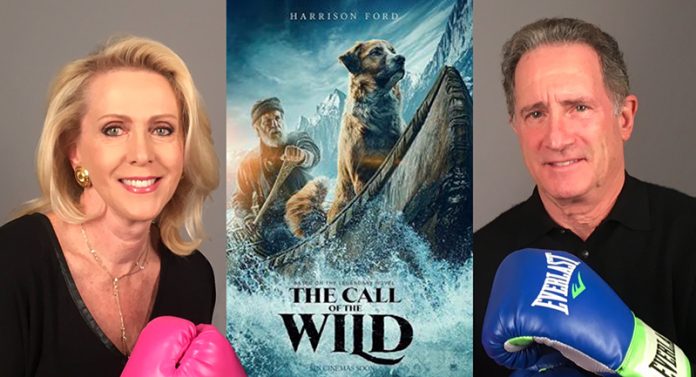 It’s Jeanne and David Kaplan of Kaplan vs Kaplan, with their film reviews of the movie THE CALL OF THE WILD, starring Harrison Ford and Karen Gillan.

Jeanne: Jack London’s 1903 classic novel, “The Call of the Wild”, has never looked better on screen. There have been many adaptations of this moving story of a dog stolen from his home in 1890’s California, who is then transported to the Yukon and sold as a sled dog in the midst of the Klondike Gold Rush. Directed by Chris Sanders, with a beautifully written screenplay by Michael Green, THE CALL OF THE WILD showcases the latest in animation technology which created truly photorealistic animals.

Buck is a BIG dog — a St. Bernard/Scotch Collie mix — with an even bigger heart. His escapades have rendered him persona non grata at Judge Miller’s (Bradley Whitford) stately home in northern California, so he is forced to spend the night alone on the porch. There is good money to be made in selling dogs for dog sled teams in the Yukon. Buck is lured off the porch by thugs with the promise of a special treat and ends up in a crate, on a train, eventually hundreds of miles from his home.

On his way to being sold onto his first sled team, Buck rescues a harmonica belonging to John Thornton (Harrison Ford), and returns it to him as John is boarding his own freighter north. When Buck becomes part of Perrault (Omar Sy) and Francoise’s (Cara Gee) motley mail delivery sled team, he’s quite unsure of his footing. But the big guy gets the hang of it, helping Perrault to finally make his schedule on time.

Through a series of unfortunate/fortunate events, Buck is saved by Thornton who determines it’s time for the two of them to begin an adventure of their own. The bond between man and his dog grows ever stronger until each realizes what must happen next.

THE CALL OF THE WILD is such a gorgeous film — all around. It is sumptuously shot by legendary cinematographer Janusz Kaminski, who is responsible for such stellar films as SCHINDLER’S LIST (1993), SAVING PRIVATE RYAN (1998) for which he won Oscars, THE DIVING BELL AND THE BUTTERFLY (2007), WAR HORSE (2011), LINCOLN (2012) and BRIDGE OF SPIES (2015) — to name just a few. Add to that the fabulous music by John Powell, known for the BOURNE series and HOW TO TRAIN YOUR DRAGON and its sequels.

As for the CGI Buck, he is completely engaging. We know immediately that he’s not a real dog, but the CGI effects are truly well done —amazing actually. All the animals are wonderful — no matter what anyone else says or writes — but it is Ford who brings his deadpan magic to Thornton, thus elevating the film. He has never been better.

It is the majesty of the Yukon that transcends THE CALL OF THE WILD. Filmed on location in Santa Clarita, California and British Columbia, Vancouver and the Yukon, Kaminski captures the magnificence of the land with the eye of a true artist. And for this reason, along with many others, the film should be seen on the big screen — it’s simply breathtaking.

THE CALL OF THE WILD is a special treat for the entire family. Trust me — everyone will fall in love with Buck!

David: In this 2020 version of Jack London’s classic THE CALL OF THE WILD, a crusty Harrison Ford plays John Thornton, a role previously performed by the likes of Clark Gable and Charlton Heston. Ford’s Thornton is cantankerous, all right, but with a big heart, generously on display well into the movie after he adopts Buck, the St. Bernard-Scotch Collie mix who is the four-legged hero of this rousing film.

As the leader of the photography crew, Kaminski dazzles the viewer with night shots featuring the moon and a glorious sky, but more importantly, he captures the sheer excitement and tension in scenes involving an avalanche, a trip through rapids in a canoe, Buck diving into frigid waters to save a woman who falls through the ice and a confrontation with a fearsome bear.

There has been some criticism of the use of CGI effects to animate the dogs, wolves and other creatures, making them too human. Thankfully, the filmmakers did not attach human voices to the animals. Furthermore, I believe the massive visual effects crew went to great lengths to not go overboard in this regard. We understand every thought and emotion of these perfectly designed animals merely through their ever-so-subtle facial mannerisms and expressive eyes.

Buck knows instinctively he cannot stay with John Thornton forever, so he connects with a female wolf, saving her from the aforementioned bear. Their relationship is precious on screen without overdoing it.

The only trite portion of THE CALL OF THE WILD involves Dan Stevens (most famous  for “Downton Abbey”) as the villainous Hal, a greedy seeker of gold with zero knowledge about sled dogs. Other than that, this movie should be seen on the big screen. It’s really the perfect vehicle for an aging Harrison Ford.

And how’s this for a recommendation? Only 24 hours after our screening, Jeanne opined she was ready to see it again.