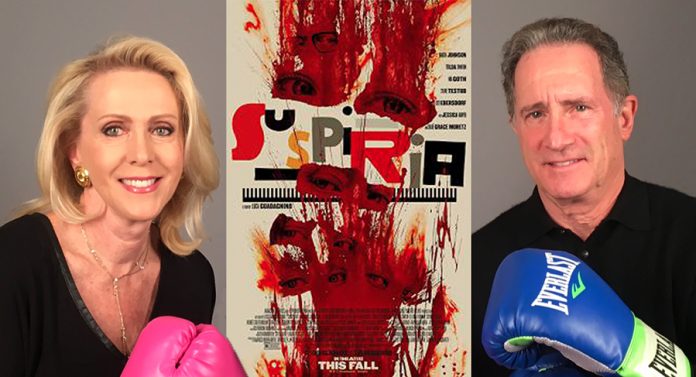 Jeanne: Director Luca Guadagnino (CALL ME BY YOUR NAME, 2017) was just 10 years old when he became enamored with a poster at a closed cinema in northern Italy depicting Dario Argento’s 1977 classic horror film, SUSPIRIA. It wasn’t until he was 13 that he actually saw the movie on Italian public television. This began his life-long obsession with creating his own version of SUSPIRIA.

Susie Bannon (Dakota Johnson), a runaway Mennonite from Ohio, has arrived in 1970’s Berlinto audition for the world-renowned Helena Markos Dance Company. Her dream has been to dance the lead in “Volk”, the company’s signature piece, one Susie has watched hundreds of times, memorizing every move. Her audition catches the attention of Madame Blanc (Tilda Swinton), who immediately bestows on Susie a position in the company.

With her focus on her dancing and improving her craft, Susie ignores what’s going on around her, specifically the machinations arousing suspicions for her best friend in the company, Sara (Mia Goth). While Susie is preparing for the lead in the company’s final performance of “Volk”, Sara has been meeting with Dr. Josef Klemperer (also Tilda Swinton), who possesses a diary from a former dancer with Markos named Patricia (Chloë Grace Moretz), who has disappeared.

Let’s just state — right off the bat — that SUSPIRIA is not a film for the masses. It is definitely a real horror — both literally and figuratively. It’s not that it’s particularly frightening, because it’s not. It’s extremely violent — and bloody — with a penchant for the macabre. And at times, SUSPIRIA is downright silly and stupid.

Guadagnino tapped American screenwriter David Kajganich to formulate the script. As you know, if you follow my reviews, it’s all about the writing, and Kajganich fails miserably. Perhaps Argento’s original didn’t have much of a plot line — or an equally convoluted one — but Kajganich’s screenplay veers all over the place. It seems to be connected only by the shockingly grotesque images of the young dancers’ mangled bodies.

Though I no longer enjoy viewing grisly movies — which makes me wonder why I thought we should see SUSPIRIA after just sitting through HALLOWEEN — I can at least appreciate a good terror-inducing film. SUSPIRIA does not conjure up sheer panic, just revulsion to the morbid acts of brutality. And you know you have a problem when “His View” — who may have been napping — wakes up to the ultimate gory climax and bursts out laughing. And he’s the one who supposedly enjoys horror films? Harumph!

Swinton has a rather long history with Guadagnino, so that  helps — a tiny bit — to understand why she would agree to make this movie. She gives it her best shot, but in one of the final scenes, her character, Madame Blanc, has been viciously attacked and it’s so utterly gruesome that it becomes laughable. It’s just not a role that equates to Swinton’s talent.

And don’t even get me started on Johnson. She was in Guadagnino’s 2015 film A BIGGER SPLASH, along with Swinton, and, for the life of me, I don’t see what he sees in her. I believe she is one of the least talented actors plying her craft. However, she did prepare well for this role by learning to dance.

In fact, the only entertaining aspect of SUSPIRIA is the company’s performance of “Volk”. It’s a stunning number of grace and precision, until it becomes aberrant and sickening. There may be some who admire such filmmaking — I do not.

David: Director Luca Guadagnino could not have chosen a more bizarre and drastically different film to follow up his 2017 Oscar-nominated gem CALL ME BY YOUR NAME. SUSPIRIA is a remake of the 1977 horror film by the same name. As a young teen, Guadagnino became obsessed with the movie and that feeling never left him. He has achieved the dream of creating his version of the film.

He cast two of his past favorites as the leads. Tilda Swinton has a unique triple role, primarily as Madame Blanc, head of a contemporary dance troupe in Germany. Dakota Johnson (FIFTY SHADES franchise) is the novice American dancer, Susie, who stunningly takes over the lead, a “prima ballerina”, if you will. Full disclosure: I didn’t realize Swinton’s other two roles in the film until I read the press notes, the makeup is that extraordinary. Unfortunately I can’t say the same for the movie itself.

Yes, there are some shocking scenes that, at the very least, are unsettling. The most blatant example would be the emotional and physical demise of the troupe’s former lead dancer, Olga (Elena Fokina). Just prior to accusing the all-woman dance company of being witches, she finds herself trapped in a studio full of mirrors, and there she contorts her body, and flings herself into solid objects, with sickening results.

It is this early scene that caused one critic (surprisingly not Jeanne) to leave our screening — she never returned. And Chloë Grace Moretz opens the film as a disturbed patient with deep-seeded emotional problems. She never returns, either.

Several times in the movie an elite group of the closest dancers, along with Blanc and her associates, is seated at a restaurant where they all drink heavily, laugh uproariously, and smoke even more heavily. It is 1977, after all. Before the true nature of the troupe is revealed, we sense that these women are not anything close to normal. I will admit that these sequences are somehow relatively captivating.

Aside from the fact that the outré plot is confusing, Johnson’s performance is less than convincing. She maneuvers well enough, even to the point of being mesmerizing on the dance floor. But as the central figure in the story, I didn’t find her at all compelling. More importantly, the film becomes such a gore fest of bloody events, it becomes laugh-inducing. Thus I can’t even remotely call SUSPIRIA entertaining.