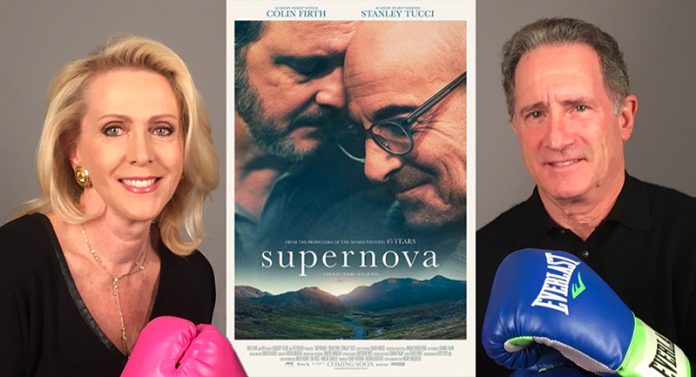 It’s Jeanne and David Kaplan bringing her and his review of the movie SUPERNOVA, starring Colin Firth, Stanley Tucci, and Pippa Haywood.

Jeanne: I often write of my love for “small” films — ones that tell a good story with little or no fanfare, just really good writing and acting. SUPERNOVA is one of these.

Written and directed by Harry Macqueen, SUPERNOVA stars two of my favorites, Colin Firth as Sam and Stanley Tucci as Tusker, partners in love for 20 years. It has been two years since Tusker received a diagnosis of early-onset dementia, and now, as his condition progresses, Sam and he have planned a road trip to visit friends, family and the places they loved together.

Macqueen did quite a bit of research on the topic of early-onset dementia, collaborating with the foremost specialists in the field, and also people who have been affected by the disease. It’s a painful, sorrowful journey for all those involved, and he has chosen two of the best actors to bring his creation to the screen.

As it turns out, Firth and Tucci have been friends for 20 years. So, when Macqueen approached Tucci about the role of Tusker, he immediately was interested and suggested Firth to portray Sam. It could not have worked out better for Macqueen.

For a movie like SUPERNOVA to be successful, the relationship between the two leads is paramount. This is a love story — pure and simple — and how that love is tested by a heartbreaking disease. Firth and Tucci have a genuine ease with each other that perfectly transcends to these characters. We watch them bicker like all couples do, but the underlying trust and love is vividly apparent. Each of them has never been better.

SUPERNOVA was filmed in and around Keswick in the Lake District of England. Many years ago, David and I traveled there with David’s sister, so we were particularly enchanted with the scenery. And much like Sam and Tusker, there were quite a few ‘debates’ over someone’s, who shall remain nameless (David), driving skills. But this is, of course, what makes SUPERNOVA so real — and ultimately so sad.

According to Macqueen, supernova refers to the “massive explosive event at the end of the evolution of a star”. Tusker travels with his telescope and has a keen knowledge of all the celestial bodies. Macqueen also feels supernova adeptly describes Tusker as a person and the progression of his dementia. He has created a small film for the ages — don’t miss it.
Opinion: Strong See It Now!

David: Ordinarily I am wary when a film doesn’t delve very far into its characters’ back stories. How likely is it that the viewer will feel a connection or any empathy to what is happening on the screen? Such is the case with SUPERNOVA, a new film from writer/director Harry Macqueen starring Colin Firth and Stanley Tucci.

With these two consummate actors virtually in every frame, the lack of their characters’ histories never even comes to mind. Instead, we are on a mini adventure as Sam (Firth), a pianist, and Tusker (Tucci), a writer, partners in life — clearly very much in love — travel through England’s Lake District to visit family and friends. The old camper in which they ride is a character in its own right.

Macqueen’s opening shot reveals a partially nude Sam sleeping next to Tusker, so there is no mystery as to their relationship. We pick up with the gay couple in their van where Sam does the driving on a narrow two-lane road in the English countryside.

As things progress, it is evident that Tusker suffers from some type of medical malady which we learn is early-onset dementia. Yet it is Tusker who seems to always be in a lighter, more jovial mood while Sam bears the responsibility of caring for his declining partner. Such is the premise of SUPERNOVA — Tusker’s behavior related to his failing condition vs. Sam’s fear of losing his best friend.

There are innumerable telling moments in this film — especially the dinner table scene with Sam, Tusker, Sam’s sister Lilly (Pippa Hayward) and a number of their close friends.  And the moment Sam finds a cassette tape among Tusker’s belongings is crushing. Macqueen wastes no words in telling his tale. As Tucci said when he read the script, there is “no fat”.

Tucci was actually Macqueen’s first choice to join the cast, and it was Stanley who asked if Macqueen would like him to contact his old friend of 20 years, Colin Firth, to sign on. What Macqueen would soon find out is Tucci had already sent the screenplay to Colin — and he loved it.

The question became who would play which part because both men read for Sam and Tusker. When you watch this story unfold you will realize, as did I, that Tucci is perfect for the part of Tusker as Firth is for Sam. And that’s all you need to know to invest a mere 93 minutes of your time for SUPERNOVA. Macqueen imbues Tusker with a love of the sky and all its wonders. The title “supernova” refers to the virtual explosion at the end of a star’s evolution, symbolic of Tusker’s final chapter.

It’s a simple yet complex movie, beautifully photographed by two-time Academy Award nominee Dick Pope despite constant rain in the Lake District occasionally hampering filming. Jeanne and I actually spent time in the town of Keswick (pronounced keh·zuhk) and it truly is breathtaking scenery. We stopped our rental car at one point, and I was accosted by a flock of sheep who were drawn to the M&M’s in my pocket — but I digress.

SUPERNOVA is an obvious choice given these two stars. The harsh reality of dementia and the devastating effect it could have on any of us is conveyed — via intelligent dialogue or a knowing glance — with compassion and understanding.
Opinion: See It Now!