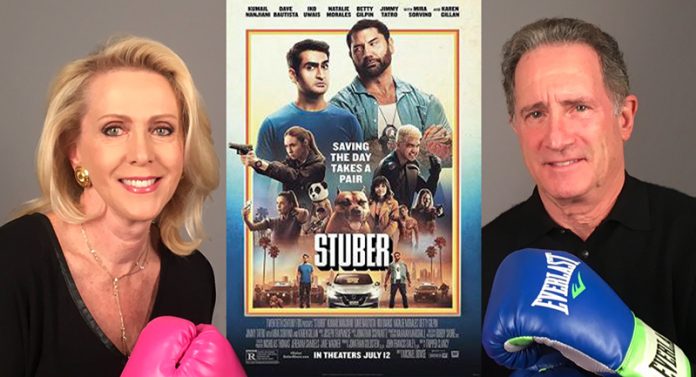 It’s Kaplan vs Kaplan, the his and her movie reviews of the ovie Stuber.

Jeanne: STUBER is stupendously — idiotic. Ha — caught you there. You thought I was going to write stupid. I think a lot of people have said/written that already. And it’s too bad, because the premise of a cop having to take an Uber is kind of funny. But unfortunately, screenwriter Tripper Clancy doesn’t capitalize on the more amusing aspects of that idea, and instead STUBER devolves into a violent mess that is decidedly not entertaining.

STUBER opens with LAPD Detective Vic Manning (Dave Bautista) and his partner Sarah Morris (Karen Gillan) in hot pursuit of Oka Teijo (Iko Uwais), a brutally ruthless drug dealer. When Teijo does the unthinkable and gets away, Vic becomes obsessed with finding him. His boss, Captain Angie McHenry (Mira Sorvino), tries to get him to take a few days off to spend with his sculptor daughter, Nicole (Natalie Morales).

But Vic has Lasik eye surgery scheduled and is determined to get that done. A sure tip comes through concerning the whereabouts of Teijo, causing Vic to attempt to drive even though he can’t see. Sound stupid? Well, it is.

Stu (Kumail Nanjiani) works at a sporting goods store during the day and drives Uber at night and on weekends to make a little extra cash. He’s head-over-heels in love with his best friend, Becca (Betty Gilpin), who, so typically, always picks the wrong men. Yawn. They are planning to open a spin spa, so Becca can teach and they’d be partners in a small business. Of course, Stu is only doing this because he wants to be close to Becca — he has no interest in spinning.

Vic calls an Uber — pool, no less — and that’s when poor Stu shows up. One destination leads to another and now Stu has become Vic’s unwitting “partner” of sorts. It’s a little more than halfway through the movie when we learn who the realcriminal is — and who exactly wants Vic dead. By that time, however, we no longer care.

I will openly admit that I did laugh out loud a few times. I love Nanjiani — he’s really funny — and really good, most of the time. But, as our daughter pointed out, he has no one to blame but himself, cuz surely he read the script. If he couldn’t assess that Clancy’s screenplay was poorly constructed with inane dialogue, that’s his fault.

A major problem with STUBER, besides all that, is the casting of Bautista. He just doesn’t have the appeal to partially carry a movie. And his acting abilities are sorely lacking. He’s a great character actor, he should stick to that. And to add to that, the chemistry between Nanjiani and Bautista is virtually non-existent, which is paramount for a cop buddy film.

The one bright spot of STUBER is Morales. She clearly nails the role of the frustrated daughter, who also happens to possess a wry sense of humor, which I guess would be helpful if your father is an LAPD detective. She’s great — and she plays well with Nanjiani.

Alas, that’s about all, other than the violence. I find it shocking when comedies feel a need to be so heinous. Starting at the beginning and carrying on throughout — especially when the poor vet is unnecessarily shot and killed — STUBER is particularly bloody. Not fun —

David: It pains me to report that STUBER, the new buddy comedy-wannabe, starring Kumail Nanjiani and Dave Bautista, is not worth your time or money. Nanjiani is the brilliant comic actor/writer from the 2017 smash hit THE BIG SICK.

Bautista, nicknamed “The Animal”, is well-known to wrestling fans as one of the sport’s bigger attractions in his heyday. He’s not really a bad actor in this film, but “uber” (no pun intended) violence and remarkably dumb circumstances do NOT make for a good movie.

If the two leads had good chemistry as a pair of totally opposite individuals trying to thwart a sadistic drug dealer, I didn’t notice. I was too busy looking at my watch to see when 93 minutes would elapse. And as Jeanne is known for saying — “it’s all about the writing”. A director named Michael Dowse and a writer named Tripper Clancy collaborated on this fiasco. Neither man had anything remotely distinguished on his resume going in. That record is still intact.

One of the sillier storylines has Vic (Bautista) trying to drive immediately after Lasik eye surgery. This results in a variety of bad consequences. But thatdoes set up Vic’s reason to hire an Uber, app instructions courtesy of his daughter Nicole (Natalie Morales). Stu (Nanjiani) is more concerned that his leased car is slowly being demolished and that he may not receive a five-star rating. With the right material, Nanjiani is as good as anyone working today. But not with this script.

I suppose the film’s premise would appeal to a lot of moviegoers. After all, who among us has never taken an Uber or a Lyft?? But Nanjiani’s character rarely acts like an authentic Uber driver, and his antics in this whole escapade are not very funny..

Here’s a thought. I invite prospective ticket buyers to check out the trailer for STUBER. If you smiled more than once, then maybe this movie is for you. Oh, and for the record, because Nanjiani’s character is named Stu, his co-worker at a sporting goods store nicknames him STUBER — because he drives Uber part-time.