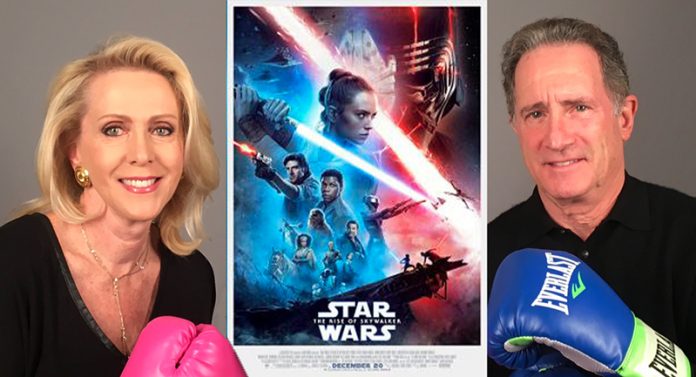 Movie critics Jeanne and David Kaplan of Kaplan vs Kaplan, give the hers and his reviews of the movie, Star Wars: The Rise of Skywalker, starring Daisy Ridley, John Boyega, and Mark Hamill.

Jeanne: Sadly, 2019 will be remembered for some rather disappointing series endings. First, the final season of “Game of Thrones” was unsatisfying, especially the very last episode. Now we have the wrap-up of this STAR WARS trilogy, and though Episode IX, STAR WARS: THE RISE of SKYWALKER isn’t a disaster like the “GOT” finale, it does try to accomplish too much — to make everyone happy. And, we all know — that never works.

But no matter, I still love it. Whenever the brilliant John Williams anthem starts it brings me right back to the awesome original movie 42 years ago. And while no director — not J.J. Abrams, Rian Johnson or anyone — can recreate the intensity of the very first STAR WARS, STAR WARS: THE RISE of SKYWALKER does provide its own tremendous excitement.

The lightsaber duel between Rey (Daisy Ridley) and Kylo Ren (Adam Driver) immediately comes to mind. Rey, a Jedi Knight, is still in her training process and honing her craft. She’s struggling to command all the requisite Jedi powers, while Ren, the First Order commander, just wants her to defect and be with him. It’s an impressive fight, especially considering they’re having it on the ruins of the Death Star as the black ocean roils around them. It’s a magnificent scene with a twist.

Of course, the trio of Rey, Finn (John Boyega) and Poe (Oscar Isaac) are together again, along with Chewbacca (Joonas Suotamo), the rest of their droid buddies and C-3PO (Anthony Daniels, who has played C-3PO in every STAR WARS film). There are a few new and interesting characters, who help Chewy provide most of the comic relief. But the banter between these three compatriots is, at times, light and breezy, and at others, serious when they need to be. They make a great threesome (foursome if you count Chewy) and we root for them to be successful because we have grown to love them.

Abrams was able to cobble together some footage of the late Carrie Fisher as General Leia Organa to give her a well-deserved sendoff. And there are other familiar faces popping up here and there. But it is a STAR WARS film, so there will be lovers and haters. David’s not a hater, but he isn’t a fan, either — what does he know? All I know is when that amazing music begins, along with the scroll of “A galaxy far, far away”, I’m in movie heaven!

David: The less I say about this final chapter in the STAR WARS franchise the less chance I will stumble with some glaring error of fact or fantasy. I have not always been able to follow the complicated storylines and character relationships, but this finale was clearer to me than all the others.

And I have been critical in the past about some of the sequels and prequels, as in show me something new and different.

But STAR WARS: THE RISE of SKYWALKER has accomplished that, and at the center of it all is Daisy Ridley as Rey. She is a true warrior and a credible heroine that we can all admire.

The film contains the franchise’s signature humor, especially with Chewbacca, C-3PO, R2-D2, and BB-8. For the record, Finnish actor Joonas Suotamo stands about 6’11” and makes a fine Chewy. Anthony Daniels, now 73, was the original C-3PO 42 years ago and he hasn’t skipped a beat as the likeable droid in this movie.

The special effects, admittedly, have lost much of their novelty, but they still generate interest. And what would a STAR WARS movie be without the incredible music from legendary composer John Williams? It starts with the familiar opening theme accompanied by the rolling text that disappears into the universe. It’s hard not to get goose bumps with that intro. As for the 87-year-old Williams, he’s a five-time Oscar winner, but what may be just as impressive is the fact he has been nominated 32 other times for an Academy Award.

STAR WARS: THE RISE of SKYWALKER is a winner in all respects. Diehard fans will surely appreciate it, and there are enough surprise moments to satisfy even the most jaded devotees. Despite what Jeanne may have written, I actually like this finale.