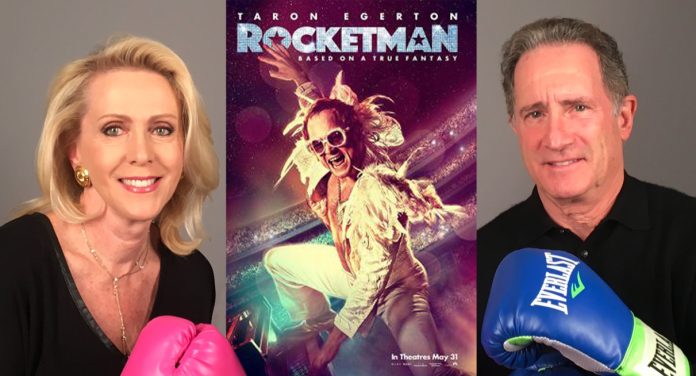 Movie: ROCKETMAN
Rating: R, language throughout, some drug use and sexual content
Length: 2:01
Release Date: May 31, 2019

Jeanne: Imagine having Sir Elton John give you total free license to tell his life story. As he honestly states, “My life has been pretty crazy. The lows were very low, the highs were very high. Unfortunately, there wasn’t much balance in between.” Who knew? I have always been a huge fan of his music, but I had no idea his life had been so out of control.

ROCKETMAN begins with Elton (Taron Egerton) checking himself into rehab wearing one of his outlandish costumes — a red number adorned with rather large wings, helmet with horns and of course, the oversized glasses rimmed with rhinestones. The year is 1990 and Elton has finally realized he needs help for his addictions to alcohol, drugs, sex and bulimia.

And, in beginning to explain his back story in therapy, we are catapulted back to the 1950s in Pinner, England, and to the home of seven-year-old Reginald Dwight (Matthew Illesley). Reggie is singing “The Bitch is Back”, the first musical showpiece in a film loaded with many. And it’s the audience’s introduction to director Dexter Fletcher’s vision for telling this larger-than-life entertainer’s fantastical bio.

Written by Lee Hall, ROCKETMAN is an unconventional movie about Reggie Dwight’s unbelievable transformation from a shy, blue-collar piano prodigy to the music superstar, Elton John. And because Elton’s meteoric rise was such a phenomenon, the idea behind Hall’s, Fletcher’s and producer, David Furnish’s (Sir Elton’s real-life husband), production “was to create something that would genuinely explode off the screen, a riotous joy-ride of imagination, celebration and drama.“ ROCKETMAN certainly accomplishes all of that and more.

This movie boasts fantastic performances from the entire cast, starting with Illesley and Kit Connor, who plays 10-year-old Reggie in the rousing sequence featuring “Saturday Night’s Alright for Fighting”. Moving from a London pub, out into the alley and all the way to a fairground, as Reggie morphs into Egerton as a teen, this scene is one single tracking shot that hosts a bevy of extras and dancers which took 12 weeks to choreograph. It’s amazing!

Bryce Dallas Howard is cast as Sheila Farebrother, Reginald’s narcissistic, caustic mother, and Steven Mackintosh is Stanley, his cold, unloving father. Both actors are true to their parts, showing little or no love for their complicated yet obviously talented son.

It’s up to Reggie’s grandmother, Ivy (Gemma Jones), to save him and she manages to do just that. She’s the one who recognizes his unique abilities with the piano, insisting upon lessons and taking him to a special academy to further his training. Jones is absolutely superb — such a pivotal character in young Reggie’s life, without whom he may never have flourished. She is quietly perfect as the voice of reason, coaxing her daughter to see the value of letting Reggie pursue his dreams.

But the true miracle in Elton’s life is meeting Bernie Taupin (Jamie Bell) in a chance occasion in 1967 at Ray Williams’ (Charlie Rowe) office, where they both show up for a job writing music at Liberty Records. Ray hands Elton an unopened envelope and tells him to go write music to what’s inside, which are lyrics penned by Taupin.

It is a fateful meeting that begins a lifelong association and friendship. And as the movie progresses, it becomes clear how many times Taupin saves Elton’s life. Taupin is Elton’s solid rock during most of his craziness, and Bell delivers a marvelous turn as this steady force.

Elton’s first big breakout performance comes at the Troubadour in West Hollywood on August 25, 1970, where, in ROCKETMAN, music producer, Giles Martin, uses “Crocodile Rock” to capture the scene. Again, Elton John was not interested in the decision makers using his music chronologically — and they didn’t. It is on this night that Elton meets John Reid (Richard Madden), his first long-term boyfriend and the man who would become his manager for the next 28 years.

Madden is the sexy Scottish actor who played Robb Stark in “Game of Thrones” and last year’s BBC hit “Bodyguard”. He possesses sensational sex appeal — and the capabilities of a real cad. Reid is not a particularly nice person and Madden gives a very convincing portrayal.

However, without Egerton, ROCKETMAN would not be the smashing musical success that it is definitely. He and Sir Elton spent time together and “nothing was off limits”. It’s an astonishing feat — Egerton is in every scene and does all his own singing and dancing. Elton gave him the go-ahead to make the songs his own and not do an impersonation. The result is astounding. His energy in the musical numbers is remarkable. And yet, when it comes to conveying Elton’s worst moments, Egerton is equally adept.

And trust me, there are some very serious scenes. I did not have any idea that Elton John was addicted to so many things. Thankfully the film doesn’t wallow in his tragedies, but much of his lifewas dramatic. Perhaps it’s too early — or the fact that Rami Malek won last year for portraying Freddie Mercury in BOHEMIAN RHAPSODY — but I will be shocked and dismayed if Egerton isn’t at least nominated come Oscar season.

As I mentioned, I love Elton John and his music. It all brings back so many fond memories of my youth. I couldn’t help myself from singing (quietly) and dancing along during the screening. Fletcher, Egerton, et al have managed to create a memorable film filled with all the outrageousness, drama, fun and entertainment deserving of the global superstar known as Sir Elton John.