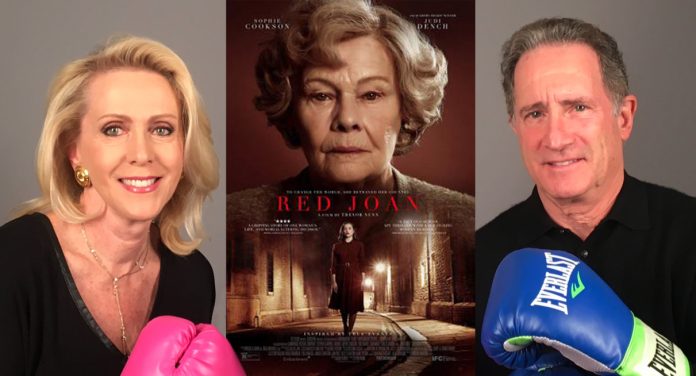 Kaplan vs Kaplan, the his and her movie reviewers, bring you their thoughts on the movie Red Joan, starring Judi Dench.

Jeanne:  Based on the best-selling novel of the same name by Jennie Rooney, RED JOAN imparts the true story of a retiree in her early 80’s in the year 2000, named Joan Stanley in the book, whose life is turned upside down by an arrest for spying on her country. Joan, played by the indomitable Judi Dench, begins to relive that part of her life as she is being questioned at MI5 headquarters.

As a fresher, age 18, at Cambridge University in 1938, Joan (Sophie Cookson) studies physics. A fateful knock on her dorm window by a fellow classmate named Sonya (Tereza Srbova) brings Joan into contact with the Cambridge Spy Ring — and Sonya’s handsome and mysterious cousin, Leo (Tom Hughes). Joan is captivated by Leo, and though she doesn’t officially become a member of the Communist Party, she begins to do small favors for Sonya and Leo, with whom she has fallen in love.

But Leo is more committed to his ideals than to Joan. He leaves her on several occasions, and after university, Joan is hired as a secretary for Max (Stephen Campbell Moore) at the highly top-secret Tube Alloys Project. Their work is a race against the Germans to develop the atom bomb.

Joan and Max form a very strong bond, but Max is married and refuses to just have an affair. He wants to marry Joan, but his wife will not agree to a divorce, that is until Max is arrested and sent to prison for the crimes committed by Joan. She has been passing secrets to the Russians about the bomb because she is convinced that if all of the major countries of the world have the same capabilities, the tragedies of Hiroshima andNagasaki will not be repeated. So RED JOAN asks the  hard question, was Joan right — or wrong — to do what she did?

Directed by Trevor Nunn, who describes his production as “a small film on a huge subject”, RED JOAN boasts a tremendous cast with an excellent adapted screenplay by Lindsay Shapero. Dench, as always, is simply superb. As the movie progresses, we watch her go from a doddering old woman to a defiant defender who still believes she did nothing wrong.

Dench’s portrayal is brilliant, especially when battling with her grown son, Nick, played by Ben Miles. He’s appalled by this side of his mother he obviously knew nothing about. And though she has mixed emotions regarding her activities, she maintains that her motives were purely patriotic.

While Dench is remarkable, Cookson is, as well. She’s enchanting and lovely as the young, naive Joan. But she comes to realize the injustice that surrounds her — not only regarding the power of the bomb itself, but the power that men have over women. Though she was able to attendCambridge, women did not receive degrees like the men, they were only given certificates. And, as young Joan, Cookson embodies all of the frustrations and resentments felt by those extremely bright women held back by the times.

Cookson and Hughes share a smoldering chemistry — much more so than she and Campbell Moore. The three of them are so very believable in these roles, along with Dench, Srbova and Miles. RED JOAN isn’t a tale of spies, a la James Bond or Jason Bourne. Instead, it is Rooney’s fictional account inspired by the true story of Melita Norwood, a British scientist who ultimately gave classified secrets to the Russians.

RED JOAN isn’t the kind of movie which will garner any awards, but it is solid storytelling about a pivotal time in world history. And Nunn and his cast and crew have done an exemplary job bringing it to light.

David: Judi Dench stars in the title role as a formerCambridge University student of physics who is arrested in her early 80’s on charges of espionage. Joan Stanley shared secret documents, related to the atom bomb, with Russia after WWII, but not for personal gain or animosity toward her nativeEngland. She did it for the altruistic motive of preserving world peace.

Sophie Cookson brilliantly plays the younger Joan, while at Cambridge and beyond. At a time when women were second class citizens, Joan stands out as a physics mastermind who collaborates with her boss Max Davis (Stephen Campbell Moore), but ultimately betrays him by sharing his work with the Russians. Even so, their love affair is not diminished, at least in this film version directed by Trevor Nunn.

Sophie also has a rather torrid affair with Leo, a handsome and charming Communist activist atCambridge, played by Tom Hughes (Prince Alberton TV’s “The Crown”). But he very apparently tries to use Joan in his desire to benefit Stalin’s Russia.

RED JOAN, based on the fictional novel by Jennie Rooney and the adapted screenplay by Lindsay Shapero, is largely based on the true story of Melita Norwood, dubbed the “Granny Spy”. The film is well acted. Dench’s role is essentially a supporting one, so Cookson’s character — featuring her understated beauty and obvious intelligence — is the focal point of the story.

The entire movie is seen in continuous flashbacks between Dench’s octogenarian Joan and Cookson’s late 20’s/early 30’s character. The editing is seamless and simple to follow. Joan’s adoptive son, Nick (Ben Miles), is visibly shocked upon learning of his mother’s arrest, and vows not to support her at trial. But his turnabout at a subsequent news conference is a brief but memorable moment.

Some may consider the arrest of an elderly woman for something that occurred some 50 years earlier absurd. However, we realize that, like homicide, there is no statute of limitations when it comes to espionage or treason. Yet the elder Joan’s plight is sympathetic because of her humanistic motives for her actions. And she freely admitted her participation.

RED JOAN is totally dialogue-driven, but never dull. It’s a little known part of British history that Nunn discovered while browsing in a bookstore. He emailed the author, Ms. Rooney, to say that her book should be made into a movie, even though the film rights were probably granted long ago. Imagine his surprise when an immediate email response from Ms. Rooney revealed that the film rights were still available. And Nunn and his cast and crew have done justice to the story.