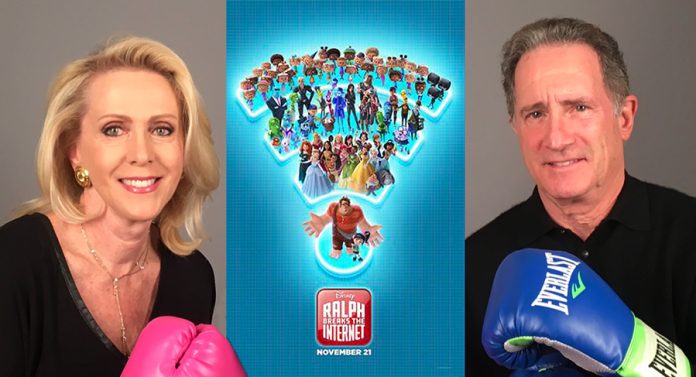 Jeanne: Wreck-It Ralph (voiced by John C. Reilly) and Vanellope von Schweetz (voiced by Sarah Silverman) are temporarily out of their league when they are forced to invade a foreign world called the Internet to find a new steering wheel for Vanellope’s “Sugar Rush” race car. Mr. Litwak (voiced by Ed O’Neill), the arcade owner, has already unplugged Vanellope’s machine, so she and Ralph are “racing” against time to find the replacement part.

RALPH BREAKS THE INTERNET is absolutely captivating from the beginning, all the way through the credits. Much like last year’s COCO and 2016’s ZOOTOPIA, this offering from Walt Disney Animation Studios is off-the-charts when it comes to dazzling colors and spectacular set designs, especially when Vanellope and Ralph enter the mind-bending universe of the Internet.

As these two best friends zip around the World Wide Web in search of a steering wheel, the audience is treated to screenwriters’ Phil Johnston’s, who also co-directs with Rich Moore, and Pamela Ribon’s clever spin on all of the various companies populating the Internet. In their zeal to procure this much-needed wheel, Ralph and Vanellope overbid on Ebay and now have to get the cash to pay.

This begins a variety of experiences for the zany twosome. After meeting Yesss (voiced by Taraji P. Henson), the head algorithm of the site, BuzzTube, who determines which videos are trending, she sends them to a game called Slaughter Race. There they encounter Shank (voiced by Gal Gadot), the star of the game. Vanellope, a car racing genius herself, feels right at home challenging the enigmatic Shank. And much to Ralph’s disbelief — this is where Vanellope would like to stay.

There are too many wonderful moments to enumerate, but one of my favorites has Vanellope slipping into a green room filled with all of the Disney princesses. While much of the banter will be lost on the little ones, the adults in the audience will vastly appreciate the humor. It’s good to see Disney poking fun at themselves, but, of course, the idea for this ingenious scene came from Ribon — clever girl.

Sequels are rarely as good, but six years after WRECK-IT RALPH, RALPH BREAKS THE INTERNET is an engaging, highly entertaining movie break for the entire family. You may need a good respite following Thanksgiving. And don’t forget to stay through the credits.

David: RALPH BREAKS THE INTERNET is an instant contender for an Academy Award for Best Animated feature. For most of its unusually long running time, I predict you will have a smile plastered on your face, as did I.

John C. Reilly (Ralph) and Sarah Silverman (fearless speed demon Vanellope) are totally enchanting together. Their dialogue is witty, natural and down-to-earth. A host of writers deserve credit, many of whom worked on the hilarious ZOOTOPIA from 2016. The bottom line is we believe they are two best friends who are completely comfortable with each other. And Wonder Woman herself, Gal Gadot, is flawless as the voice of Shank, a star speed racer who leads her own motley crew.

The film’s life lesson is that sometimes friends must go their separate ways to follow their dreams, but true friends always find a way to be close. Co-directors Rich Moore and Phil Johnston also were part of the writing team here and Moore is credited as one of three directors of ZOOTOPIA, claiming an Oscar in the process. The ZOOTOPIA influence, combining hilarity with poignancy, is very evident in RALPH BREAKS THE INTERNET.

The scene with the collective group of Disney princesses is as laugh-out-loud funny as it is clever. Wait till you see these iconic figures decked out in casual wear! The animated visual effects are extravagantly detailed. One example: Ralph and friend have a root beer, and the liquid shifts ever so slightly when they move their mugs. Another: Ralph gently wiping a tear from Vanellope’s cheek.

RALPH BREAKS THE INTERNET is sheer entertainment, a total delight from beginning to end. The internal workings of the Internet are highly imaginative. It’s presented as a world in constant motion. When someone conducts a search, the head search agent, dubbed KnowsMore (Alan Tudyk), consults his book and announces how many websites are found. It’s a world as strange to Ralph as it is familiar to us, with references to Amazon, Ebay and Google. As Ralph says, “At least I know where to go if I need goggles”.

This movie is fun, folks! Don’t miss it! I look forward to a second viewing.