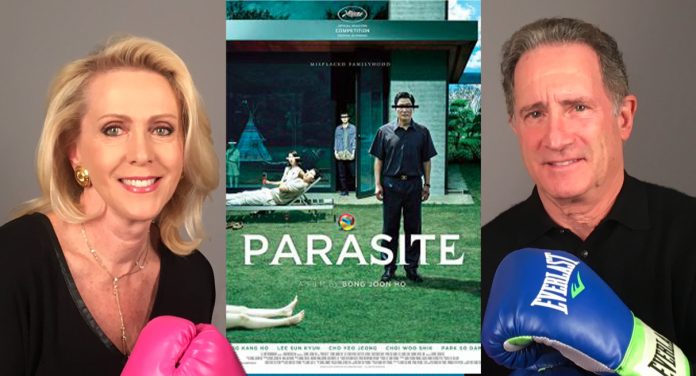 It’s Jean and David Kaplan of Kaplan vs Kaplan, the his and her movie reviews. This week they bring us the movie Parasite, starring Cho Yeo-jeong, Park So-dam, and Choi Woo-shik.

Jeanne: Director Bong Joon Ho’s latest effort, PARASITE, is according to Bong a “family tragicomedy”. It blends dark comedy, satire and violence all wrapped in its indictment of society’s ills. PARASITE is a brilliant piece of filmmaking adding to Bong Joon Ho’s already impressive list of accomplishments in the film industry.

First, we meet the Kim family; father, Ki-taek (Song Kang Ho), mother, Chung-sook (Chang Hyae Jin), son, Ki-woo (Choi Woo Shik) and daughter, Ki-jung (Park So Dam). Both children are college-age but have flunked their entrance exams multiple times. No one in the Kim family is employed. They live in a filthy basement apartment in a squalid part of the city, and get by  doing odd jobs for the local pizzeria.

A chance for Ki-woo to tutor the high-school-age daughter, Da-hye (Jung Ziso), of the wealthy Park family, opens doors for the rest of the Kim clan.

Ki-jung becomes the art therapist for the Park’s younger son, Da-song (Jung Hyeon Jun), and Ki-taek takes on the role of driver for Mr. Park (Lee Sun Kyun). Together the three Kims conspire to get Yeon-Kyo (Cho Yeo Jeong), Mr. Park’s wife, to fire her long-time, live-in housekeeper, Moon-gwang (Lee Jung Eun), so Chung-sook can take over that job.

The Parks have no idea that their new staff is related, even when Da-song observes that they all carry the same odor. These are the hired help and though they treat them well, the disconnect between the classes is palpable. Park himself comments to his wife that occasionally Ki-taek almost crosses the line, but never does — and he likes that. But what Park doesn’t like is the way Ki-taek smells when he’s driving his luxury automobile.

Bong Joon Ho returned to his native Korea to make PARASITE. He co-wrote the screenplay with Han Jin Won and it is a masterpiece. There are so many twists and unexpected turns, some funny, others tragic. Bong’s story is an astute example of the perils of combining two very different socio-economic groups under one roof. We’d like to think that everyone can get along, but it is rarely the case.

The cast was chosen by Bong for explicit reasons. It was imperative to him that they “play off each other well…as with a soccer team”. And with that, he succeeded. Everyone, down to the Park’s three little dogs, performs with an intensity and sense of purpose pulling off this tragicomedy.

Of course, Bong Joon Ho, being the consummate filmmaker, has assembled an extraordinary crew. PARASITE is exquisitely filmed with memorable camera angles by Director of Photography Hong Kyung Pyo. David may also mention the shot of one of the Park dogs — the cutest dog, ever — from under a bed. It’s beyond precious.

The original score by Jung Jae II is compelling and adds a great deal to the overall experience of PARASITE. This is a uniquely entertaining movie — one that you can’t stop thinking about long after leaving the theatre. It won the Palm d’Or at Cannes this past May and it doesn’t take a parasite to understand why.

David: PARASITE is a movie that quietly sneaks up on the viewer with a fair amount of humor as members of the destitute Kim family of South Korea become embedded with the wealthy Park family. The Kims are supreme con artists, and the beautiful but naïve Mrs. Park, Yeon-kyo (Cho Yeo Jeong) buys into all their outlandish claims.

The Kim daughter, Ki-jung (Park So Dam) is hired as an “art therapist” for the family’s little boy; the father, Ki-taek (Song Kang Ho) is hired as the driver for the rich husband, Mr. Park (Lee Sun Kyun) and so on. But the story eventually descends into a maelstrom of shocking violence that will leave moviegoers stunned. Some films are instantly forgettable the moment the final credits roll. PARASITE is decidedly not one of those.

In fact, PARASITE won the esteemed Palm d’Or at the 2019 Cannes Film Festival in a unanimous vote! As we write this review, the film is at 100% on Rotten Tomatoes with over 120 critics reporting. Jeanne and I will certainly help to maintain that perfect record.

In addition to its amazing premise from writer-director Bong Joon Ho (SNOWPIERCER, 2013), the film boasts superb acting from its ensemble cast, and spectacular cinematography by Hong Kyung Pyo. When one of the Park’s three dogs threatens to expose the Kim’s son, Ki-woo (Choi Woo Shik), who is hiding under a bed, the camera catches Ki-woo’s frantic attempts to shoo the dog away, then reverts back to the dog itself peering at Ki-woo.

The ever-suspenseful PARASITE keeps us guessing throughout. Will the Kim family be discovered drinking and partying at the Park household while the Parks are on a camping trip? And what deep, dark secret does the Park’s former housekeeper, Moon-gwang (Lee Jung Eun), reveal when she returns to the Park home while the Kims are reveling?

PARASITE is all sub-titles, hardly a word of English. But do NOT let that deter you from seeing one of 2019’s best-conceived movies.