Home Culture Kaplan vs Kaplan Movie Reviews – ONCE UPON A TIME IN…HOLLYWOOD ... 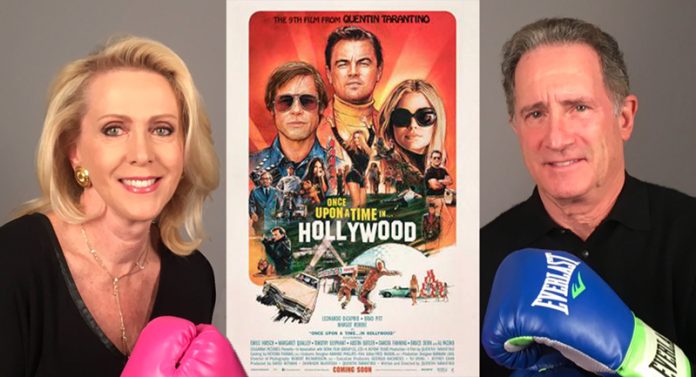 It’s Kaplan vs Kaplan, the his and her movie reviews of the film Once Upon a Time in…Hollywood by Quentin Tarantino – starring Margot Robbie, Leonardo DiCaprio and Brad Pitt.

Movie: ONCE UPON A TIME in… HOLLYWOOD
Rating: R, language throughout, some strong graphic violence, drug use, and sexual references
Length: 2:41
Release Date: July 26, 2019

Jeanne: Quentin Tarantino’s 9th film, ONCE UPON A TIME in…HOLLYWOOD, is set in 1969 LA and he likes to think of it as his “memory piece”. He was six years old and he claims that 1969 was the year that formed him. It’s his homage to Hollywood’s golden age, and he states that it is his next-to-last film — then no more.

But what Tarantino has managed to do is cast two of the biggest male movie stars in Hollywood history together — at last. Leonardo DiCaprio stars as Rick Dalton, an actor known for his Western TV series “Bounty Law”, which aired from 1958 to 1963. His stunt double, Cliff Booth, is played by Brad Pitt — and seeing the two of them in a film is a fantasy come true.

Dalton has tried to transition to films — and failed. Now he’s doing guest star roles on other TV series, but Marvin Schwarzs (Al Pacino) is after him to go to Italy to headline a few Spaghetti Westerns. His drinking is out of control, and due to many DUIs, Cliff has become his driver. On one of Rick’s shows, Cliff implores him to ask the stunt coordinator, Randy (Kurt Russell) for a job, but Randy’s wife (Zoë Bell) doesn’t like Cliff because she — and everyone else — is convinced he killed his wife and got away with it. (One of the funniest scenes in ONCE UPON A TIME in…HOLLYWOOD).

Rick lives in the Hollywood Hills and his new next-door neighbors are none other than Roman Polanski (Rafal Zawierucha) and his new wife, Sharon Tate (Margot Robbie). They are the new “IT” couple — Polanski just debuted ROSEMARY’S BABY, and Tate just starred in THE WRECKING CREW with Dean Martin. Rick is so excited to have them as neighbors, telling Cliff that he could be one pool party away from a plum role in one of Polanski’s next films.

Of course, we of a certain age know the unbelievably dreadful fate of Ms. Tate and her friends one very hot summer night in August 1969. The Manson family is introduced here by Tarantino through Cliff. He picks up a young woman named Pussycat (Margaret Qualley), whom he’s seen on the streets before, and drives her to the ranch owned by George Spahn (Bruce Dern), where the Manson family now lives.

Alarmed for the safety of his former colleague, Cliff demands to see George, only to find him delusional but seemingly happy to have all of the attention from the women, especially Lynette “Squeaky” Fromme (Dakota Fanning). Cliff’s curiosity almost cost him dearly, but he manages to escape before any harm comes to him.

We were fortunate enough to see ONCE UPON A TIME in…HOLLYWOOD in 35mm. As always, Tarantino’s films are beautifully shot and edited. Credit for that goes to his cinematographer Robert Richardson and editor Fred Raskin. But truly, writer/director Tarantino deserves most of the credit for this one. He’s a visionary for all things Hollywood. He even suggested a list through “Esquire Magazine” of the 13 films you should watch before seeing ONCE UPON A TIME in…HOLLYWOOD.

That’s an amazing challenge — one that would hurt his box office if fans really cared that much. I, myself, have only seen a handful of his recommended, but, trust me, it’s really not necessary to enjoy and be entertained by ONCE UPON A TIME in…HOLLYWOOD. Tarantino’s brilliance is his writing — and it’s all about the writing. His dialogue is smart and clips along at a good pace. And, of course, it’s very amusing at times. However, there were occasions during our screening when I felt like I was the only one laughing — and it is funny.

But, back to the dialogue. One scene in particular focuses on Rick during a break in filming a guest spot on a new Western pilot. He’s looking for a place to read and stumbles upon his pint-sized co-star played by Julia Butters. It’s their conversation, followed by their eventual scene together — which, by the way, includes Luke Perry in his last role — that exemplifies Tarantino’s ability to hold the audience in his grip. Butters is absolutely adorable and certainly doesn’t shy away from the star power of DiCaprio.

The entire cast is superb. There are so many well-known actors, both in major parts and cameos — it’s incredible. And Robbie is fantastic. Watching her watching herself on screen at a matinee is pure enjoyment. She’s mesmerizing. Apparently, Tarantino has taken some flak because she doesn’t have a lot of lines. Honestly, that never entered my mind. It’s his film — his writing — and she’s perfect in it.

It is, however, DiCaprio and Pitt who make ONCE UPON A TIME in…HOLLYWOOD what it is — magnificent. Viewing them in scene after scene is such a treat! They are both true consummate

professionals — and yet, we believe they’re having as much fun creating this work of art — DiCaprio’s term for Tarantino’s movies — as we are seeing it unfold.

ONCE UPON A TIME in…HOLLYWOOD is not your typical Tarantino picture. I’m not sure all his followers will love it like they have his others. But, no matter — it’s the film he wanted to make — the fantasy story he wanted to tell. Accept it and move on —

David: From the fertile mind of Quentin Tarantino comes a fairy tale for the ages, a brilliant script filled with suspense, humor and the writer/director’s love of nostalgia. Billed as his “9th film”, ONCE UPON A TIME in…HOLLYWOOD may ultimately be his best.

Ostensibly the movie features a TV cowboy named Rick Dalton (Leonardo DiCaprio) who wants to upgrade to cinema but feels like a has-been. His best friend and constant companion is stuntman, Cliff Booth (Brad Pitt). But this film will take a much more dire direction. Set in 1969 Hollywood, Tarantino gives us a glimpse of Charles Manson who knocks on Rick’s neighbor’s front door early on in the story. From that moment on the audience has an inescapable feeling of dread for what history knows will follow on August 9th of that year.

But for most of the film we are treated to Rick and his acting struggles, plus Cliff’s interaction with a bevy of characters. Pitt’s scenes are profoundly more intense and interesting than what DiCaprio is given to do, but together their on-screen chemistry is undeniable.

Cliff’s confrontation with Bruce Lee (an incredible turn by Mike Moh)  on a movie set is magnetic and hilarious. But things really get interesting when Cliff picks up a scantily clad hitchhiker named Pussycat (Margaret Qualley) who tells him she lives on the Spahn ranch, a place where Cliff was a stuntman years before.

They drive to the site because Cliff wants to reunite with owner George Spahn (Bruce Dern), but what he finds is a gathering of almost all young females acting oddly. One of these is Squeaky Fromme (Dakota Fanning) who tries to stop Cliff from seeing George. Also present is a guy named Tex (Austin Butler). Of course, those of us who lived through the horrific Manson family murders in 1969 know this is Tex Watson, and the girls represent Manson’s brainwashed crew.

Tarantino was only six years old at the time of the slayings, but his fascination with these events is truly curious. I wonder how many of the critics and others at our screening under the age of 60 were aware of what they were witnessing, unless they did their homework.

Margot Robbie captures what may be Tarantino’s interpretation of the late Sharon Tate’s child-like fascination with her own movie career. She finds it difficult to walk past the poster promoting the Dean Martin vehicle THE WRECKING CREW with her name prominently displayed below the title. She then proceeds to coerce the theater manager to let her in for free to see the matinee. It’s a delightful sequence.

Tarantino spares no expense to recreate the Hollywood of 1969. Shots of Hollywood Boulevard with automobiles appropriate to the era are present. He also shoots a scene in El Coyote, an iconic Mexican restaurant on Beverly Boulevard in LA, still in business today. The famous Pantages Theatre’s marquee features 3 IN THE ATTIC, and in one sequence at the Playboy Mansion in LA, Tarantino has Steve McQueen (an incredible likeness by Damian Lewis of HBO’s “Billions” fame) telling a fellow partygoer the story behind Roman Polanski and Sharon Tate.

Al Pacino is seen early in ONCE UPON A TIME in…HOLLYWOOD as Marvin Schwarzs who convinces Rick he needs to leave his television guest roles and try Spaghetti Westerns. Pacino can do no wrong as he brings wonderful energy and charisma to every portrayal. Another cast standout is 12-year-old Julia Butters. Her character interacts with Rick Dalton in one of the scenes for a pilot  and she is mature beyond her years.

ONCE UPON A TIME in…HOLLYWOOD runs well over two hours, but the time literally flies by. Checking Tarantino’s filmography, other than his first feature RESERVOIR DOGS, the rest of his movies generously exceed two hours and there’s a good reason for that. He gets the maximum story-telling ability out of every scene and none of his dialogue is superfluous.

DiCaprio’s signature scene in this film comes when he trashes his dressing trailer, berating himself for failing to memorize his lines. It is symbolic of his commitment to excellence in a career filled with outstanding performances.

But it is Pitt’s confrontation with intruders, aided by his fabulous pit bull, that is a real nail-biter. Pitt has an innate ability to be the protagonist who stands up to bullies and in this film he makes them pay dearly for their mistakes.

If Hitchcock was the “Master of Suspense” then Tarantino is the “Master of Violence”. When the final scenes unfold, it becomes clear why Tarantino named his movie the way he did. ONCE UPON A TIME in…HOLLYWOOD is a gem that had me thinking, “If only!”.