Kaplan vs Kaplan Movie Reviews – ON THE BASIS OF SEX 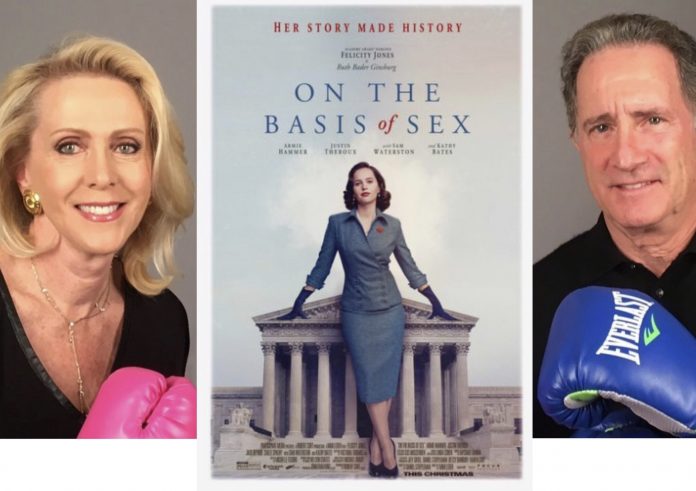 It’s Kaplan vs Kaplan movie reviews of the movie On the Basis of Sex, starring Felicity Jones. Jeanne: Even I, who struggled with sex discrimination as a college graduate getting started in the male-dominated paper industry way back when, have forgotten the immense impact Ruth Bader Ginsburg has had on the constitutionality of the laws set in place hundreds of years ago to thwart women. Though females still grapple with some of those same issues today, ON THE BASIS OF SEX reminds us of the power which one very determined woman wielded to make those changes.

ON THE BASIS OF SEX begins with Ginsburg (Felicity Jones), already married to Martin D. Ginsburg (Armie Hammer), beginning her first year of Harvard Law School in 1956. As one would surmise, she is one of only nine women admitted to the class of around 500, much to the consternation of Harvard Law School Dean, Erwin Griswold (Sam Waterston), who believes these spots would be better served by male students.

When Martin, a second-year student becomes ill with cancer, Ruth attends both her classes and his, along with caring for Martin and their infant daughter, Jane. Once Martin is in remission and graduates, he is offered a job in New York City. Instead of permitting Ruth to take classes at Columbia to complete her Harvard law degree, Griswold denies Ruth’s request.

She subsequently transfers to Columbia instead and graduates at the top of her class. Unable to find a job with a law firm despite a glowing resume at both law schools, Ruth takes a position as a law professor at Rutgers Law School, where she specializes in “The Law and Sex Discrimination” — among other subjects.

Her first big break to pursue her life’s work comes as a tax law case which Martin brings to her attention in 1971. A single man from Denver, Charles Moritz (Chris Mulkey), is denied a tax deduction for his mother’s care provider because he is an unmarried man. Ruth sees this as the perfect opportunity to gain the sympathy of the male-dominated judges in an effort to address discrimination based on sex, period. As Ruth and Martin prepare their case with the help of Mel Wulf (Justin Theroux) of the ACLU and the civil rights attorney, Dorothy Kenyon (Kathy Bates), it is fascinating to watch the brilliance of their work unfold. And though Ruth appears to falter under the scrutiny of the male judges (something Ruth Bader Ginsburg, herself, states never happened), the monumental importance of her arguments is not lost on the audience.

Ginsburg reviewed the screenplay, written by her nephew Daniel Stiepleman several times, and though some creative license is in effect, she was pleased with the final production. She was especially impressed with Jones’ portrayal, which is marvelous, and her ability to sound like she really hailed from Brooklyn, as Ginsburg had.

Jones is exemplary in her ability to nail down Ginsburg’s spunk and toughness. I loved the transformation director Mimi Leder achieves through Jones as Ruth morphs from a law student, mother and professor into a practicing lawyer honing her craft before becoming one of the most important jurists ever to sit on the Supreme Court. It’s remarkable — and Jones makes it believable.

No matter what your politics — and it shouldn’t matter — Ruth Bader Ginsburg is a national treasure. We all need our champions and Ginsburg has been a tireless advocate for the fairness of civil rights for all. Leder and Stiepleman in ON THE BASIS OF SEX have given us a brief glimpse of her amazing life.

I hope there will be other biopics detailing even more of her astonishing career. And if you haven’t seen the documentary RBG by Betsy West and Julie Cohen, out this past May, you owe it to yourself to check it out. David: A mere seven months ago moviegoers were treated to a superb documentary about the life of Supreme Court Justice Ruth Bader Ginsburg. Now we have a new release about Ginsburg’s early life as a Harvard/Columbia law student and aspiring attorney, entitled ON THE BASIS OF SEX.

Portraying the now 85-year-old jurist as the beautiful young woman she was is Academy Award nominee Felicity Jones (THE THEORY OF EVERYTHING). Jones’ performance is credible, strong and moving. And, as three circuit court judges found, very persuasive.

The film’s climax features Ginsburg arguing in front of the three by-the-book judges who believe in “things as they naturally are”. Jones’ fearless portrayal, eventually converting these cynical magistrates into believers, is as good a turn by any female actress I have seen this year. I believe it should thrust Jones into the conversation of Best Actress nominees for 2018.

Mimi Leder, veteran director of made-for-TV movies and television shows dating back to 1987, demonstrates she is capable of helming a feature-length project with ON THE BASIS OF SEX. The movie is rife with humor, but it also captures the absolute pressure Ginsburg must have felt in arguing successfully against the established norms of the times — i.e., it’s a man’s world and that’s the way “things naturally are”. And most importantly, Ginsburg’s final argument is as tense as anything you might see in films, in any genre.

In those critical scenes, Ginsburg is contending that never-married son Charlie Moritz (veteran character actor Chris Mulkey) should be entitled to all the tax-related benefits that a married/widowed woman might have in taking care of an aged parent. Charlie, in an understated performance by Mulkey, is initially skeptical that Ruth might be the right attorney to argue his case. But when she does, in fact, prove her point, it’s a memorable moment for Charlie and for the viewer. Diminutive (4’11”) actress Cailee Spaeny plays the Ginsburgs’ young daughter Jane. Like her father Martin, she is largely supportive of her mother’s career and even helpful in a critical way. ON THE BASIS OF SEX is Spaeny’s fourth major film of 2018 — she is a rising star.

ON THE BASIS OF SEX is an inspiring look at a true American hero. I believe you will find Jones’ Oscar-worthy performance as emotionally satisfying as did I.