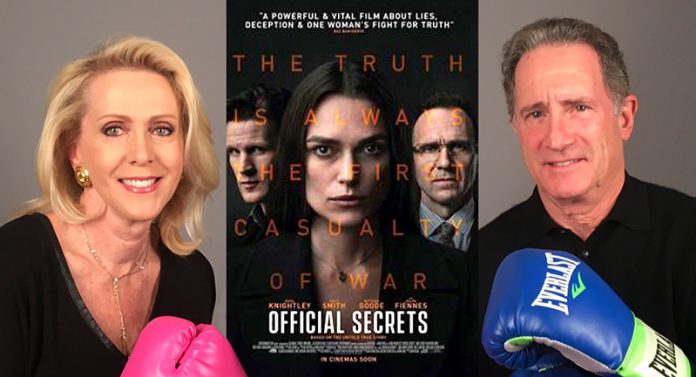 It’s Jeanne and David Kaplan of Kaplan vs Kaplan, with the his and her movie reviews of the film Official Secrets, starring Keira Knightley.

Jeanne: With the everyday lying and corruption of our current administration, it’s easy to forget that we’ve had other duplicitous cabinets who were also self-serving and nefarious — and I’m not talking about the Obama era. OFFICIAL SECRETS is about the leadup to the British involvement in the Iraq war. It begins with a memo from the National Security Agency (NSA) in the U.S. asking the UK’s assistance in gathering compromising information on United Nations Security Council members.

Katharine Gun (Keira Knightley) is a British intelligence specialist tasked with the routine handling of classified information. In 2003, she intercepts a directive from the NSA requesting dirt so the council members can be blackmailed. The U.S. wants to secure their votes in favor of invading Iraq.

Gun is at once alarmed and appalled. She reaches out to a friend — a journalist — for help, not knowing what else to do. Together they determine that this explosive information must be leaked to the press in order to hopefully stop Britain from rushing into an illegal war. At great risk, Gun copies the email and releases it through her friend to the British newspaper, The Observer.

Her whistleblowing didn’t stop the invasion. But the intelligence agency for which Gun worked, Government Communications Headquarters (GCHQ), launched an intense investigation to find the person who leaked the memo. Instead of putting her colleagues at risk, Gun confesses, despite warnings from her husband, Yasar (Adam Bakri), a Muslim, who is very nearly deported after she comes forward.

OFFICIAL SECRETS is based on the book “The Spy Who Tried to Stop a War: Katharine Gun and the Secret Plot to Sanction the Iraq Invasion” by Marcia and Thomas Mitchell. Another husband-and-wife team, Gregory and Sara Bernstein, wrote the screenplay, all under the watchful eye of Ms. Gun. Katharine also met with Knightley and visited the set, all of which was very surreal for her, as one can imagine.

The Bernstein’s script is very well written. This ordeal played out for well over a year for Katharine and Yasar, as they waited to learn if she would be formally charged. It’s difficult to build a narrative around such a lengthy period, but OFFICIAL SECRETS crackles with tension and suspense. To this day, Katharine is still bound by the Official Secrets Act, so any additional information regarding what else she saw or heard during her tenure at GCHQ will not be forthcoming.

Director Gavin Hood has assembled an exemplary cast, with Knightley being his “perfect” choice. Coming off last year’s stunning performance in COLLETTE, for which she should have received an Oscar nom, Knightley is obviously self-assured enough to play a real-life spy/whistleblower. Following Ms. Gun’s lead, she conveys faithfully the frustration and futility Katharine experienced. It’s a stellar achievement.

The rest of the cast is equally impressive. Matt Smith of “Doctor Who” and “The Crown” stars as one of the lead journalists, Martin Bright, at The Observer. Rhys Ifans and Matthew Goode portray the other two reporters, Ed Vulliamy and Peter Beaumont, with Conleth Hill of “Game of Thrones” fame as the paper’s editor, Roger Alton. All of them and their characters add to the seriousness of Katharine’s dilemma.

But I have to say that my favorite member of this ensemble is Ralph Fiennes, who is brilliant as Ben Emmerson, Gun’s lawyer. This is such a great role for him, and he certainly makes it his own. It seems like it’s been forever since he’s had a strong character like Emmerson to portray, someone who will not suffer fools. And Fiennes gets to deliver the best line — the very last line, “Go fish somewhere else” — of the film, to Jeremy Northam, no less.

One may think that because this has long been out of the news, it is no longer important — or interesting. This couldn’t be farther from the truth. In our current political climate, OFFICIAL SECRETS is a reminder that it is up to each and every one of us to do our part.

David: When millions of television viewers around the world saw the statue of Saddam Hussein in Baghdad toppled from its moorings, and President George W. Bush subsequently declaring “Mission Accomplished!”, who knew that the war in Iraq would rage for so many years? Or that millions of Iraqi soldiers and civilians would die, or that thousands of U.S. military personnel would perish?

(GCHQ), tried to interrupt the process of having the United Nations Security Council, under false pretenses, approve of Bush’s Iraq invasion in 2003.

That woman was Katharine Gun, and she is brilliantly portrayed by Keira Knightley in the new film OFFICIAL SECRETS, so named after the British law forbidding disclosure of top-secret information. It is easily one of the best performances of Knightley’s career.

Gun received a memo from the U.S National Security Agency (NSA), and subsequently mailed it anonymously to the British newspaper The Observer. One of the ace reporters, Martin Bright (Matt Smith), picked up on the story and his articles created a significant controversy, especially in the UK and the U.S. The premise of this movie may elicit mere shrugs from American moviegoers, but the story in the UK was a major one. Prime Minister Tony Blair is shown as being complicit with Bush and his cabinet, including Colin Powell (seen in archival footage addressing the UN), to convince UN members that Hussein, indeed, had weapons of mass destruction (WMD).

As for Gun, she is labeled a traitor, risking a long prison sentence and the end of her marriage if she loses her case in the British courts. Her husband Yasar (Adam Bakri) is slated for deportation because he is a Muslim. Leading her legal team is Ben Emmerson (Ralph Fiennes). Fiennes is his usual excellent self as the no-nonsense attorney who presents Gun with her options in such a manner that she pursues the correct course of action. And an almost unrecognizable Jeremy Northam portrays the barrister heading the prosecution. The fact that he and Emmerson are friends adds to the complex situation.

Matthew Goode has a minor supporting role as Bright’s colleague at The Observer, and he is always credible in any part. OFFICIAL SECRETS is director Gavin Hood’s first movie since his thrilling drone expose EYE IN THE SKY (2015). Hood also co-wrote the screenplay for this film based on the book “The Spy Who Tried to Stop a War: Katharine Gun and the Secret Plot to Sanction the Iraq Invasion”.

Fans of TV’s “The Crown” will surely recognize Matt Smith for his memorable recurring role as Prince Philip. As Martin Bright, Smith is quite compelling as the journalist whose instincts told him that the anonymous tip needed to be published, although his articles did not prevent a war. However, at least his stories — which were publicized globally — provided a basis for the gross misuse of governmental powers in the UK.

Despite the potential lack of interest on the part of American movie audiences, OFFICIAL SECRETS is justification, in a quite intriguing manner, that Katharine Gun will be remembered historically as a true heroine. Or, at the very least, she will be viewed as someone who took action to follow her beliefs, even at the risk of losing her own freedom. Knightley’s stirring performance is reason enough to see this film.