Home Culture Kaplan Vs Kaplan Movie Reviews of THE LEGO MOVIE 2: THE SECOND... 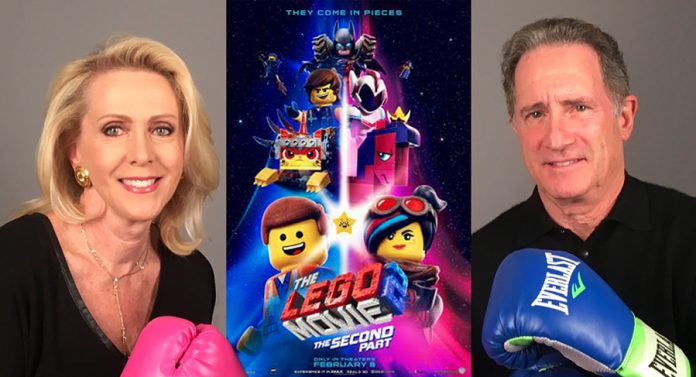 Kaplan vs Kaplan are back with their latest his and her reviews of The  LEGO MOVIE 2: THE SECOND PART, starring, Jason Momoa, Chris Pratt, Margot Robbie, Channing Tatum and more.

Jeanne: Right up front, I’m going to admit that I LOVE this movie. David claims that I laughed the most — and loudest — out of anyone else in our screening, which was full of kids. But, no matter, THE LEGO MOVIE 2: THE SECOND PART is riotously funny, extremely clever and abundantly entertaining.

This installment is the sequel to THE LEGO MOVIE (2014). There were two other spin offs in 2017, THE LEGO BATMAN MOVIE and THE LEGO NINJAGO MOVIE. Mike Mitchell directs a crazy screenplay from Phil Lord and Christopher Miller, based on a story by Lord, Miller and Matthew Fogel.

There is so much going on, it’s difficult to know where to start. It’s been five years and now Finn’s (Jadon Sand) little sister, Bianca (Brooklynn Prince), has been taking some of Finn’s Legos from the basement to play with in her room. What has resulted is Bricksburg now officially Apocalypseburg after being invaded by the Duplo gang.

Master Builder Emmet Brickowski (voiced by Chris Pratt) has had a nightmare that Lucy (voiced by Elizabeth Banks) and others have been kidnapped and taken to the Systar (get it — Systar/Sister — hardie har) System. Batman (voiced by Will Arnett), one of the kidnapees, is being forced to marry Queen Watevra Wa’ Nabi (voiced by Tiffany Haddish) of the Systar System.

Emmet, on the way to rescue Lucy and their friends, runs into Rex Dangervest (also voiced by Chris Pratt), a handsome, rugged adventurer, who agrees to assist Emmet in his quest. What Emmet doesn’t yet know is that Rex has a few ulterior motives of his own.

Many of the original character voices are back; Pratt, Banks, Arnett, Charlie Day, Alison Brie, Nick Offerman and Will Ferrell. A few of the new voices including Haddish and Stephanie Beatriz as General Sweet Mayhem, Queen Wa’ Nabi’s henchwoman. Bruce Willis appears as a Lego caricature of himself and Maya Rudolph plays Finn and Bianca’s “Mom”.

THE LEGO MOVIE 2: THE SECOND PART is loads of fun for both children and adults. Movies of this genre are getting exceedingly ingenious in their ability to appeal to each set. And, as I have stated many times, it’s all about the writing.

One of my favorite “adult” scenes has Emmet building his “dream house” for Lucy, complete with a white picket fence. Like many men, he expects her to be thrilled despite the fact he neglected to discuss their relationship first. The other demonstrates the Queen’s use of reverse psychology to get Batman to want to marry her. It’s hilarious!

The voices are great — Pratt is delightful as always, as is Banks and Arnett. Haddish’s vocals are perfect for the cuckoo queen and Willis is a hoot as himself and referring to his character from DIE HARD. Animal Logic once again provides the animation, which is, as you would expect, superb.

As usual, David fought me on this, as it was a Saturday morning screening. (When will that boy learn that I know best?) But, he liked it as much as I — it’s visually remarkable. And — when, not if, you go, make sure you stay through the credits. The amazing design team employed “masking tape” on storage cartons (you’ll get it when you see this film) to list all of the cast and crew — very inventive!

At this point I’ll recap the roster of voice talent — there is a bit of live action by actors, specifically Maya Rudolph, but here we go — in no particular order, Chris Pratt, Elizabeth Banks, Will Arnett, Tiffany Haddish —- they are the bigger stars here — plus Alison Brie, Nick Offerman, Charlie Day, Will Ferrell, Channing Tatum, Jonah Hill, Jason Momoa, Gal Gadot, Ralph Fiennes, Will Forte and — wait for it — Bruce Willis — all are credited with voice roles. Good luck picking them out as the film rolls along.

THE LEGO MOVIE 2: THE SECOND PART has a simple theme — “can’t we all get along?” The gags and lines come fast and furious and there is a recurring song that promises to “stick in your head”. Maya Rudolph’s live action cameo as a mother to Finn (Jadon Sand) and Bianca (Brooklynn Prince) is a welcome respite to the Lego action.

THE LEGO MOVIE 2: THE SECOND PART has an almost stingy budget of $60 million compared to others. It is truly a visual delight.