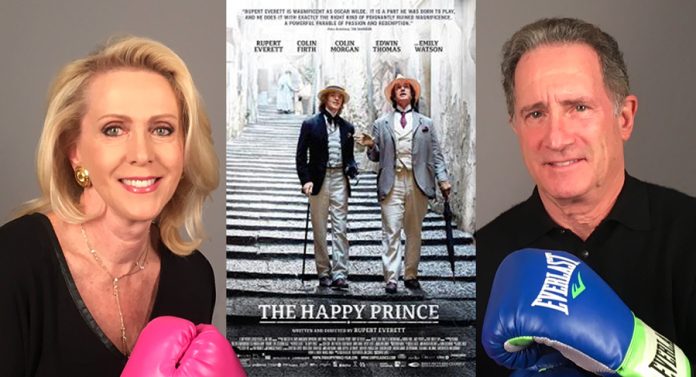 Jeanne: “The Happy Prince and Other Fairy Tales”, written by Oscar Wilde, became a distinct childhood memory for Rupert Everett who wrote and directed THE HAPPY PRINCE. He was six years old when his mother read it to him — and thus began his life-long obsession with the famous Irish poet/playwright.

Everett’s film does not celebrate the Wilde most people think of when considering the man responsible for so very many famous quotes. Instead he focuses on Wilde’s life post-prison, when most of those who lauded him turned their backs on this now pathetic vagabond who must rely on the kindness of just a few.

Wilde (Everett), upon release from incarceration for being a homosexual, is rescued by his dearest friends, Robbie Ross (Edwin Thomas) and Reggie Turner (Colin Firth), but their efforts to save him fail. He briefly attempts a reconciliation with his long-suffering wife, Constance Lloyd (Emily Watson) and their two sons. Though she loves and adores Oscar, she is warned against any further contact because of her poor health,

Against his better judgment and the warnings of Robbie and Reggie, Oscar reignites his disastrous love affair with Lord Alfred “Bosie” Douglas (Colin Morgan). Their rapturous reunion provides a sojourn to the South of France — a much needed respite for Wilde — until Alfred’s money is cut off by his mother.

Destitute, Wilde returns to Paris, where he falls in with a bunch of outcasts like himself. He becomes particularly close to two young brothers who lead a meager existence on the streets. Oscar regales them and their compatriots with stories, songs and a lot of wine.

Despite his dire circumstances, Wilde’s sharp wit is never dulled, even at the end when Robbie manages to find a Catholic priest, Father Dunne (Tom Wilkinson) to give Oscar his last rites. He continues telling tales long after everyone else has fallen asleep.

Everett has penned a true testament to the character of Oscar Wilde. And he is absolutely amazing in the starring role. His transition to Wilde is astounding — especially from Oscar’s younger, more dapper days through to his death. It’s a brilliant performance, which I fear will get overshadowed by others as the prime movie season comes into play.

But, no matter. Everett has always been the consummate actor, until roles for him essentially dried up and his career came to a screeching halt. He worked on THE HAPPY PRINCE for 10 years — viewing it as a project of love for himself and his career — and for Wilde. The screenplay is engaging and so poignant. Here is this phenomenal talent, once adored by many all over the world, now forced into a penniless existence — it’s appalling. What is more shocking is that it is still going on in some circles today.

Everett has chosen a supporting cast of close friends — all of whom are superb. I could watch Firth in anything, and as Wilde’s voice of reason, Reggie Turner, he’s perfect. Morgan is completely over the top — in a good way — as the arrogant, spoiled Bosie. What a pair he and Everett make!

As I was watching THE HAPPY PRINCE, I actually started to weep. It’s such a gorgeous, sumptuous film with stunning cinematography by John Conroy and a hauntingly beautiful soundtrack by Gabriel Yared. When Oscar and Bosie are lounging in the South of France, I wanted to be right there with them — it’s simply divine.

David: British actor Rupert Everett not only writes and directs in this biopic about Oscar Wilde, his marvelous performance as the embattled Wilde may garner him his first Oscar nomination. As I’ve said before, it’s early and there are many films yet to be seen, but Everett is truly mesmerizing.

THE HAPPY PRINCE focuses on Wilde’s adult life which ranges from being one of London’s most celebrated figures — in flashback — to one of its most reviled citizens. Wilde had the unmitigated gall to be a homosexual, a “crime” for which he served two years hard labor in Britain’s Reading Gaol. Perhaps Everett’s own gay lifestyle was a critical assist in his portrayal.

Most of the story takes place in London and Parisaround the turn of the 19th century. Wilde, whose drink of choice was absinthe — a green spirit often mistakenly referred to as a liqueur, and now banned in most Western countries — is almost always the center of attention in THE HAPPY PRINCE. He appears on stage in the U.S. talking to a delighted audience about his latest play, or at a dinner party regaling guests who demand he share his droll commentary.

However, once his sexuality became public, his life quickly descended into a downward spiral. Constantly broke, he depended on the generosity of friends, lovers and even total strangers. He is depicted as a complex individual who loved the finer things in life, even if he could no longer afford them.

On his death bed, Wilde is asked by a priest (Tom Wilkinson) when he gave up on God. In a barely audible whisper, he mentions a train station inLondon when an angry mob of apparently normal, well-to-do people ridiculed  him and spat on him as he awaited transfer to prison. We can surmise this is when Oscar Wilde, once the toast of British society, lost all faith in humanity.

THE HAPPY PRINCE is the reason serious moviegoers go to the cinema. From the impossibly impeccable cast to the costuming, to  the fabulous score by Gabriel Yared, this is a film to devour for its honesty and intelligence.

The filmmakers use flashbacks effectively in brief snippets to reveal Wilde’s past. One of my favorite scenes has Wilde, having just been given five pounds by a woman who recognizes him on the street, agreeing to sing to an adoring crowd in a raucous bar, this to compensate the bar owner for damage in a fist fight. THE HAPPY PRINCE is one of those tremendously authentic period pieces that completely engulf the viewer. It is hard to imagine that Everett’s vision of Oscar Wilde’s final years will not be the definitive narrative.

Colin Firth has a small but important part as Reggie, one of Wilde’s closest friends and an actor in his plays. Wilde’s frequent companions in the film are Robbie Ross (Edwin Thomas) and his lover Alfred “Bosie” Douglas (Coin Morgan). He was also married to Constance (Emily Watson) who gave birth to two boys. But no one captured Wilde’s heart like Bosie. This fact created animosity, actually hatred, between Robbie and Bosie, never more evident than at Wilde’s funeral.

Wilde paid a terrible price for his sexual orientation. Despite his marriage and status as a father, the genuine love of his life was the handsome Bosie, his junior by many years. We learn in the closing credits that Oscar Wilde was one of 75,000 men persecuted for homosexuality in the United Kingdom. In 2017, he, along with thousands of other men, was posthumously pardoned by virtue of a special act of the British government. This came 117 years after his death in 1900. He was 46 years old.