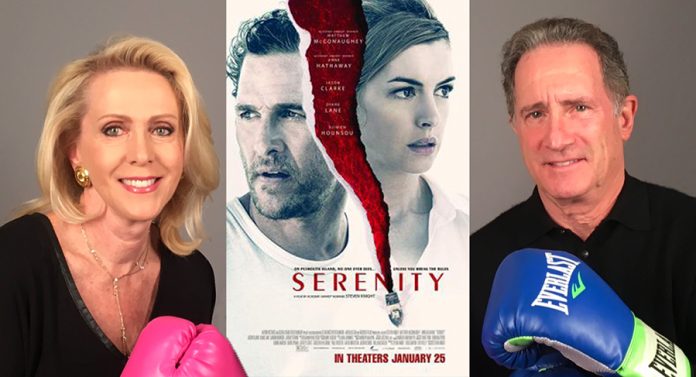 Is Serenity the worst movie of 2019? Kaplan vs Kaplan sit through the drama thriller starring Anne Hathaway and Matthew McConaughey, to find out.

Jeanne: Wow! It is very early in 2019, but already critics are falling all over themselves to declare that SERENITY will be one of the worst films of the year. Though I’m not saying it’s a great movie — or even a good one — I’ve also seen a lot worse.

Matthew McConaughey plays Baker Dill, a down-on-his-luck fisherman residing on a small island where everyone knows everybody else’s business. He’s been obsessed with catching a very large tuna whom he has nicknamed “Justice”, but the fish has eluded him time after time.

Dill blames his current bad luck on Duke (Djimon Hounsou), the co-pilot on Dill’s boat, Serenity, so he fires him. Constance (Diane Lane), Dill’s friend with benefits, gives him money for gas — and rum — until his good fortune returns, which it does in the form of his ex-wife, Karen Zariakas (Anne Hathaway).

She’s tracked down John, Dill’s name when they were married, to inform him that he was right — and that she should not have married Frank (Jason Clarke). Frank is abusive, both physically and mentally, but he’s connected enough to have her killed if she ever tries to leave him. And the son, Patrick (Rafael Sayegh), she had with John/Dill is afraid of Frank and stays hidden in his room playing games on his computer while Frank beats Karen.

Karen begs Dill to take Frank out on Serenity, get him drunk and throw him overboard as shark bait. She’s also offering Dill ten million dollars in cash — a nice payday for a fisherman living in a shack, driving a beat-up old truck.

Initially Dill balks at the idea, but as Frank’s behavior becomes more deplorable and he learns how distressed his son has become, Dill finally relents. He agrees to Karen’s plan with the caveat that she meet him at a later date with Patrick — and he gets custody of the child.

SERENITY is written and directed by Steven Knight, who has a few very good screenplays to his credit, DIRTY PRETTY THINGS and EASTERN PROMISES, to name two. Perhaps he was trying too hard to be clever with SERENITY, because the twists and turns he’s injected are highly improbable, especially the final twist.

Admittedly, it’s not a good film, but to read some critics’ reviews, you’d think it was the worst in filmmaking history. There has been significant criticism of the cast, but, as I have often written, it’s all about the writing — and Knight’s screenplay, especially his dialogue, is stunted and off-kilter. Lane, as Constance, is given so little to do, other than moaning during sex, and she virtually disappears in the second half of the film.

McConaughey, Hathaway and Clarke do their best with what they’re given, but any actor can only do so much. When the words — and plotlines — stop making sense, you know you’re in some trouble. And Knight’s film editor, Laura Jennings, didn’t do him any favors either. When switching from one “reality” to another, it’s paramount to have smooth transitions which Jennings doesn’t provide.

But, despite what others have written, I do not have a problem with Knight’s premise — nor with the idea of a boy genius’ way of dealing with a violent stepfather. While I’m not advocating murder, the “game” solution to his dire situation shows merit.

David and I were compelled to see SERENITY after checking out the negative comments online. We both really like McConaughey and Hathaway and wanted to see for ourselves what all the fuss was about, since we were not invited to a screening.

There have been plenty of other movies which I have really wanted to walk out of, but, of course, I would never! I did not feel that way about SERENITY. I was engaged enough to see the ending. That’s not a hearty recommendation, but it’s the best I can do.

David: If you’re wondering why SERENITY, Matthew McConaughey’s latest film, is getting widespread negative reviews, the reason is not because the movie is dull and without intrigue. For most of its 106 minute run time we are drawn into this tale of an Iraq war vet turned fisherman who has an obsession to catch a big tuna he calls “Justice”.

Baker Dill/John (McConaughey) is mostly aided on his fishing trawler by Duke (Djimon Hounsou). But when his ex-wife Karen (Anne Hathaway) shows up to implore him to take her abusive husband Frank (Jason Clarke) out to sea and not bring him back, Dill decides Duke should stay home. Clearly conflicted about what to do, Dill considers what Karen has offered him. The financially-strapped fisherman would reap a princely sum — actually more like a king’s ransom — to carry out the deed.

Early on we see Dill flex his muscles and six-pack abs in trysts with Constance (Diane Lane in a basically wasted role). Throughout the story his young son, Patrick (Rafael Sayegh), is seen staring at a complex computer screen — which is explained later. And that is the crux of this film’s controversy.

Writer/director Steven Knight (EASTERN PROMISES, DIRTY PRETTY THINGS) has concocted an ending that may not sit well with a lot of moviegoers, especially those who expect a neatly wrapped conclusion. In fact, at the film’s end I turned to Jeanne and blurted out that I had no idea what just happened. She was her usual adept self, explaining things to me when I’m stumped.

So we uncharacteristically talked about the script as we exited the theater and came up with a rational explanation of this irrational ending. To reveal anything more would, of course, be a spoiler. What came to mind was the ending of a movie of about 20 years ago, and that’s the only hint from me.

SERENITY is nicely photographed and pretty well acted. Clarke plays the heavy although the Australian-born actor is generally featured in good-guy roles. Here he is very effective as an obnoxious, drunken, arrogant, wife-beating lout who deserves being “offed” by Dill. Hathaway, only slightly overacting, looks good as a blonde, and McConaughey just doesn’t seem to age. He is his usual intense presence on screen, his character never without a cigarette or far from a drink.

Billed as a dramatic thriller, the movie has a few jarring scenes, and the music by Benjamin Wallfisch (Golden Globe nominee for HIDDEN FIGURES) is a good complement. So go into this without expecting too much and the surprise could be acceptable.