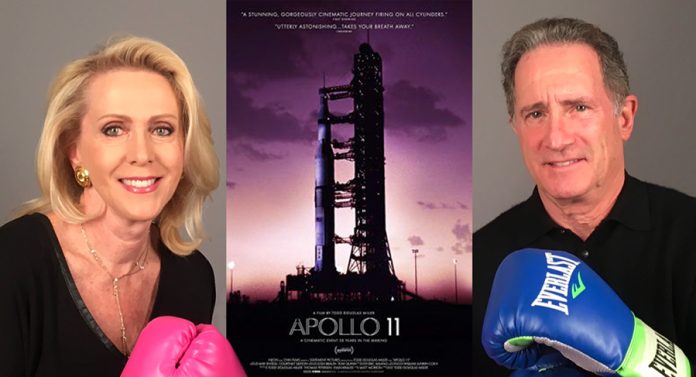 It’s Kaplan vs Kaplan, the his and her movie reviews, featuring the Apollo 11 documentary, starring Buzz Aldrin, Neil Armstrong, and Michael Collins. Their vote this week is unanimous.

Jeanne: One of the most spectacular and important achievements of mankind — to send men to the moon and back — happened in July 1969. David and I are definitely old enough to remember experiencing this remarkable feat, but watching Todd Douglas Miller’s brilliant documentary, APOLLO 11, enabled us to live this journey all over again.

When beginning this project, Miller and his team worked closely with NASA and the National Archives. But what they didn’t know was that unprocessed 65mm large format footage existed which had never before been seen by the public. The film was in pristine condition and showed breathtaking shots of the launch, the inside of Mission Control and even footage of the recovery and post-mission events.

They also found more than 11,000 hours of audio recordings, which Miller and his crew spent years listening to and documenting. This find yielded individual tracks from 60 key personnel throughout the entire mission. Armed with this treasure trove of newly discovered material, Miller and his production team have brought all of this to the big screen for people of all ages to either relive this momentous event or experience it for the first time.

Apollo 11 was manned by Michael Collins, Buzz Aldrin and Neil Armstrong, the first man to walk on the moon. It was Armstrong and Aldrin who landed the lunar spacecraft, while Collins circled the moon in the ship that would take all three back to Earth.APOLLO 11 offers many warm moments of camaraderie amongst the astronauts and those working on the ground at Cape Kennedy and inHouston.

And listening to the three of them describe the views of Earth from the window in their craft is one example of their humor. One of them, I believe it may have been Collins, equated watching the rotating Earth to being in “one of those revolving restaurants”.

Another thing which struck me was the sea of white shirts worn by the men in the massive control room. These were serious men performing important tasks, and it wasn’t until the final return splashdown and the three heroes safely aboard the rescue ship that they allowed themselves to celebrate.

Even though we know the outcome, it doesn’t make APOLLO 11 any less tense, exciting — and riveting (a word that is so overused, but appropriate here). Add the fantastic score by Matt Morton and APOLLO 11 is already in contention for Best Documentary of 2019.

David: You will never see a more fascinating 93 minutes of film than APOLLO 11, the new documentary about the first-ever moon landing, courtesy of NASA, in July 1969. See it in IMAX, if possible, but see it! This is a monumental cinematic work by director Todd Douglas Miller and his vast crew.

If you are under the age of 50, what is considered man’s greatest achievement will be something out of a history book. But if you were at least seven or eight years old in 1969, chances are this film will bring it all back as if you were seeing the event unfold for the first time. As we pointed out in our YouTube review, the filmmakers discovered film footage several years ago that was long forgotten in the National Archives. And they also sifted through 11,000 hours of audio tape over several years.

Today’s moviegoers will truly feel like they are witnessing the event first hand. From the early rocket designs, to the astronauts getting ready in their space suits, the elevator ride up the 365 foot rocket, the liftoff, landing, moon walk and return — it’s an amazing tribute to the thousands of NASA scientists and staff — and to the three astronauts. Mission Commander Neil Armstrong, the first man to set foot on the moon, died in 2012. He was 82. His partners in space, Buzz Aldrin and Michael Collins, are still very much alive at 88.

They call this “cinema verite” — what you see is what you get. There are no talking heads describing the action, although legendary news anchor Walter Cronkite narrates some of the preparatory footage. We hear what the astronauts were saying to Mission Control while in their spaceship — a lot of down-to-Earth (pun intended) humor. We also see some of the one million people who watched the liftoff from Florida beaches, motels and parking lots. Look closely and you can spot Johnny Carson at least three times in the crowd. And Richard Nixon is among the observers as the Columbia module splashes down in thePacific Ocean.

We all know the outcome of APOLLO 11, yet the suspense is heart-pounding. The actual moon landing was a huge success and the three astronauts returned safely to endure an 18-day quarantine period.

Aldrin, of course, followed Armstrong onto the moon’s surface to assist in gathering geologic samples among other tasks. But Collins, the command module pilot, stayed aboard theColumbia, maintaining its lunar orbit. He never set foot on the moon.

A word about the music for APOLLO 11 — it is theperfect complement. Composer Matt Morton utilized a 1968 Moog Synthesizer throughout the film. And if anyone is wondering, the entire Apollo program — there were five more moon landings through 1972 — cost an estimated $200 billion in today’s money.

This is simply one movie you don’t want to miss.