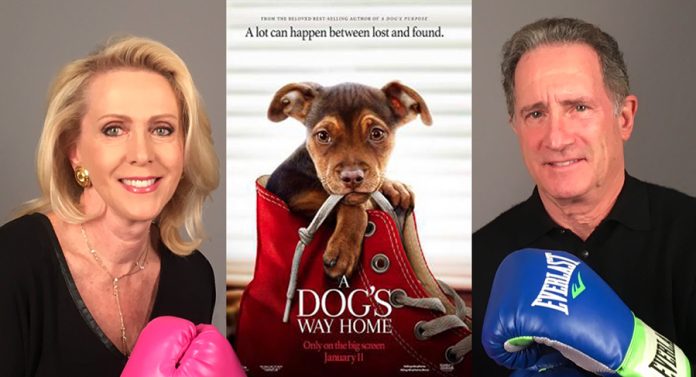 Jean and David Kaplan of Kaplan vs Kaplan give his and her point of view on A Dog’s Way Home, starring, Bryce Dallas Howard, Alexandra Shipp and Ashley Judd.

Jeanne: Movies about animals can go one of two ways  — good — or really bad. Fortunately for W. Bruce Cameron, who co-wrote the screenplay for A DOG’S WAY HOME with his wife, Cathryn Michon, based on his own book, this adaptation is good — better than good, actually.

Lucas (Jonah Hauer-King) and his female buddy, Olivia (Alexandra Shipp), are guarding and feeding a clowder of cats living under an abandoned house. Animal control makes an attempt to clear most of them out, but a few escape, including a mother cat who saves a puppy from the noose at the last second.

She nurses the female pup as her own until Lucas and Olivia find her and Lucas takes her home, thinking the puppy would be a good distraction for his mother, Terri (Ashley Judd), a veteran suffering from PTSD. Bella (voiced by Bryce Dallas Howard)loves her new home, especially all of the games she plays with Lucas.

A confrontation with a developer trying to rebuild where the cats are still living brings the evil animal control agent to Lucas’ door. Claiming that Bella is part pit bull, he invokes his right to take her into custody because Denver has a law forbidding the breed within the city limits.

Lucas realizes he must move, but Bella needs a place to stay until he can find a new apartment. Olivia’s relatives pick up Bella and take her to New Mexico, but Bella, of course, doesn’t understand that this is only temporary and seizes her first opportunity to escape.

She’s playing the last game Lucas taught her — “Go home, Bella”, which was meant to be played when animal control showed up back in Denver. Only now, Bella is over 400 miles from home, but more than determined to be back with Lucas, her blanket and their bed.

Cameron’s other book, “A Dog’s Purpose” was one of our family’s favorite books. But the film adaptation was fraught with claims of animal cruelty, and ultimately was an awful film — not nearly as engrossing as the book. Not having read “A Dog’s Way Home”, I obviously cannot compare one to the other, but it appears that this time around Cameron has a winner.

Though Dallas Howard can be a little too screechy and over-the-top at times voicing Bella, the beauty of Shelby’s, who plays Bella, expressive face more than compensates for Dallas Howard’s imperfections. Shelby herself is a rescue dog and she is absolutely perfect. You fall in love with her immediately, which means you are totally wrapped up in the outcome of her treacherous journey.

And dangerous it is! Bella encounters all sorts of pitfalls, plus many wonderful helpers along the way, including a female cougar kitten. Like she was mothered by a cat, Bella feeds and protects this feline, who becomes her new best friend — and protector.

The animal sequences in A DOG’S WAY HOME are extremely well done and moving. At one point when Bella is being stalked by a pack of wolves, I almost broke poor David’s arm off — I was freaking out — but not to worry, she survives.

A DOG’S WAY HOME is a loving tribute to dogs of all kinds. We adore our canine pets and they deserve all the love and attention we can offer. If you are a dog — or even a cat — lover, you mustn’t miss this movie! Just make sure you pack a few tissues —

David: Dog owners everywhere fell in love with the best-selling novel “A Dog’s Purpose” by W. Bruce Cameron, while the movie version grossed $180 million. Cameron followed that success with “A Dog’s Way Home”, also a best-seller. Now the film version of his second book is here, co-writing the screenplay with his wife, Cathryn Machon. I can tell you that A DOG’S WAY HOME is a true crowd-pleaser.

Bella (voiced by Bryce Dallas Howard) is a mongrel puppy that Lucas (London-born Jonah Hauer-King) discovers in the wreckage of an abandoned house across from the apartment he shares with his mother, Terri (Ashley Judd). Lucas, along with his co-worker and soon-to-be girlfriend, Olivia (Alexandra Shipp), develop an instant bond with Bella, as does Terri. And what’s not to love?

Bella is totally adorable and devoted to her new family. But Lucas and Terri must avoid the overly eager Denver animal control people who are intent on enforcing Denver’s antiquated anti-pit bull law — even though Bella doesn’t look like a typical pit bull.

Meanwhile, Bella is moved to Olivia’s relative’s home in New Mexico — some 400 miles away — until Lucas and Terri can find a new residence inColorado. But Bella only knows she has to “go home”, having been trained by Lucas to do this, but that was never intended for such an impossible distance.

A DOG’S WAY HOME is not based on a specific event, but loosely on the stories we’ve all heard about a dog finding its way back to its family home from far away. First and foremost, the many animal trainers associated with this film deserve huge plaudits for their work. Bella, along with her best buddy, a cougar cub which grows into an adult (Bella calls her “big kitty”), have an amazing on-film relationship. This is vitally important when Bella is threatened by a pack of aggressive wolves intent on killing the overmatched canine.

In fact, Bella’s epic adventure on her way back to Denver — a trek that covers over two years — is replete with many dangers, none more nail-biting than her attempt to cross a multi-lane freeway near the end of her journey. When a homeless man named Axel (Edward James Olmos) “adopts” Bella as his one and only friend, he chains Bella to himself which leads to great angst for Bella and the movie audience.

Cinematographer Peter Menzies Jr. is a vital cog in this film’s effectiveness, providing some phenomenal footage, including terrific close-ups of the animals. Director Charles Martin Smith — perhaps best known for his role in the Disney movie NEVER CRY WOLF from 35 years ago — knows how to work the audience’s emotions. So the dramatic return by Bella, as you might expect, leaves not a dry eye in the house. Seriously, I’m pretty sure everyone at our screening was crying during this well-choreographed sequence. And the soundtrack by Mychael Danna (Oscar winner for LIFE OF PI) is critical, especially during the many action sequences.

As the central human in Bella’s life, Hauer-King is very natural showing his love for his dog. Audiences will embrace this young actor, his good looks — dimples included — an obvious asset. And the military vets at the VA hospital where Lucas works take to Bella immediately. Gladly she becomes their unofficial therapy dog. They are a very likeable group.

Perhaps most importantly, Bryce Howard’s voice over, and the dialogue she is given to personify Bella, is mostly precious, only occasionally a bit melodramatic. A DOG’S WAY HOME is an entertaining story that doesn’t wear out its welcome at a brisk 96 minutes — a true family film, although it probably helps to be a dog lover.