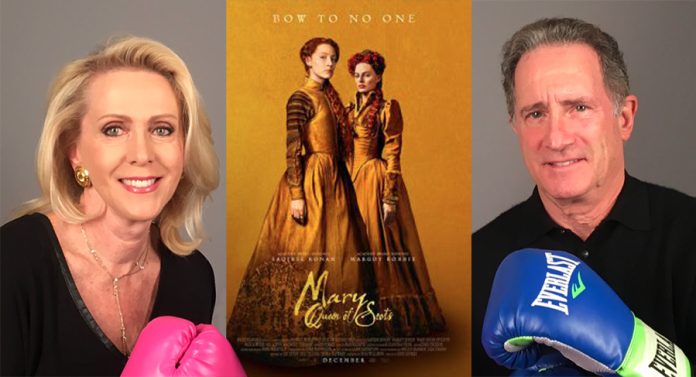 Jeanne: Based on John Guy’s biography “Queen of Scots: The True Life of Mary Stuart”, MARY QUEEN OF SCOTS is the second film in short order about powerful female rulers featuring exceptionally talented actresses. I love it!

Last week, we reviewed THE FAVOURITE and this week MARY QUEEN OF SCOTS opens, starring Saoirse Ronan as Mary and Margot Robbie as her cousin Queen Elizabeth I. Though these two films are completely different, the fact remains that they are both recognizable achievements because of the accomplished women in starring roles, and in the case of MARY QUEEN OF SCOTS — a female director, Josie Rourke, in her directorial debut.

The film begins with Mary, who was whisked away to France as a child, landing in Scotland to reclaim her throne. No one is particularly thrilled to have her back, especially those in Queen Elizabeth’s court in England, who loathe and fear her because she is Catholic. Elizabeth’s sage advisor William Cecil (Guy Pearce) convinces her to dispatch her confidante and lover, Robert Dudley (Joe Alwyn — having a busy year) to Scotland to assess Mary and offer himself to her for marriage.

But Mary wishes a betrothal for love and chooses Lord Darnley (Jack Lowden), the very handsome son of Matthew Stewart (Brendan Coyle), 4th Earl of Lennox, who is also a Catholic. She does not learn his dark secret until their wedding night — so much for marrying for love. She does eventually manage to conceive and produce an

heir — a son named James. But her reign is relatively brief and she ends up incarcerated before Elizabeth, who never married nor had children, succumbs to the pressure to have Mary silenced forever.

As I stated earlier, I am loving having all of these wonderfully strong women in positions of power. Ronan is phenomenal, so beautifully regal and self-possessed. Whether she’s dismissing traitors from her court or leading her army into battle, Ronan’s commanding presence in every scene, even alongside Robbie, with whom she only briefly appears near the end of the film, is palpable.

But this is no dismissal of Robbie’s talents. She, too, outshines her male counterparts, especially when she is most vulnerable. At one point,Elizabeth’s beauty is marred by the scabs of smallpox, and though she does recover, her face is forever changed, thus beginning Elizabeth’s habit of painting her face white. Robbie, despite her personal great beauty, masters Elizabeth’s insecurities in her portrayal. She fears Mary’s beauty, while Mary seems to fear nothing.

Rourke doesn’t hold back on the brutal treatment by men each of these monarchs faced in their lifetime. Unfortunately, not much has changed today, but I digress. Mary was betrayed many times over by the men around her and yet screenwriter Beau Willimon leaves it to Elizabeth to exclaim “How cruel men are” — an understatement for sure.

MARY QUEEN OF SCOTS isn’t only about the acting. Rourke, her cinematographer John Mathieson, composer Max Richter and costume designer Alexandra Byrne have created a resplendent period piece highlighted with breathtaking vistas, beautiful soundtrack and opulent finery for the two queens. MARY QUEEN OF SCOTS is a veritable feast for the eyes and ears — don’t miss it!

David: The setting is the late 1500’s and Queen Elizabeth I of England and Mary Queen of Scots are in a power struggle to see who should ruleEngland. Mary Stuart (Saoirse Ronan), newly widowed Queen of France, lays claim to the throne held by Elizabeth (Margot Robbie) because she is a legitimate heir. But Elizabeth is not about to give up her position.

MARY QUEEN OF SCOTS portrays this as a brutal period in world history where women were being marginalized by men who pretend to serve their female leaders. It was also the landscape for the bitter rivalry between Protestants and Catholics.

The opening scene of MARY QUEEN OF SCOTS is a preview of the fate that will befall Mary. Although it lasts only a minute, it stays with you for the entire film.

Both Robbie and Ronan are sensational in their roles, particularly Ronan who has the lion’s share of the two parts. Each actress will have you believing that they are the leaders of their respective countries. Ronan, however, still only 24 years old, has the more memorable turn. Not bad for a girl born in The Bronx — she moved with her family to Dublin at age three.

As Mary, Ronan is forceful and exudes an amazing strength in the face of great adversity. As Elizabeth, Robbie appears meek, at times, and not nearly as much in charge, but her character has strong leadership tendencies which evolve over time.

One of the more intriguing characters, despite a minor role, is John Knox (David Tennant), a master motivator who incites the anti-Mary crowds to the point where they demand her head. Public executions via beheading, of course, were commonplace in this era. If this guy Knox had coached Ohio State this year, they never would have lost to Purdue. But I digress —