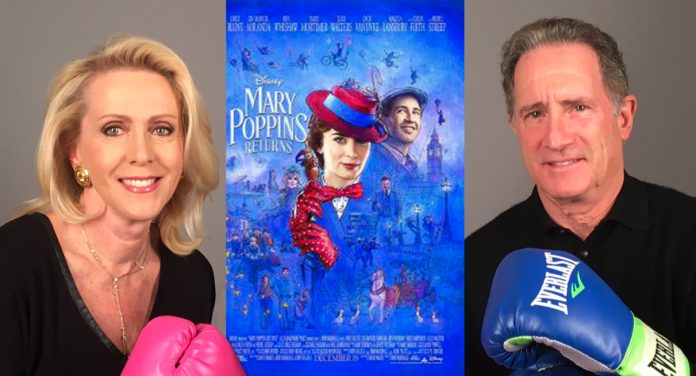 It’s Jeanne and David Kaplan with Kaplan vs Kaplan–the hers and his movie reviews of the movie Mary Poppins Returns, starring Emily Blunt, Dick Van Dyke, and Lin-Manuel.

Jeanne: MARY POPPINS RETURNS is a veritable feast for the eyes and ears. The lavish and exquisitely performed song-and-dance numbers generate enough good cheer to make even the worst “Scrooge” among us pleasantly surprised. And Emily Blunt is the perfect choice to follow in Julie Andrews’ footsteps — she is wonderfully amazing!

In MARY POPPINS RETURNS, Michael Banks (Ben Whishaw) and his sister, Jane (Emily Mortimer), are adults. Michael’s wife has recently passed away, so he and his three children, Annabel (Pixie Davies), John (Nathanael Saleh) and Georgie (Joel Dawson) live in the family home previously occupied by Michael, Jane and their parents. Jane now lives in a flat in London, but visits often.

Michael has just been informed that he has until midnight Friday to pay back the loan he took against their house or they will lose it. In the midst of all the angst, their father and aunt’s beloved nanny, Mary Poppins arrives — just in the nick of time to set everything straight.

Along for the fun and hi-jinks are Jack (Lin-Manuel Miranda), in the role made famous by Dick Van Dyke, Ellen (Julie Walters), the Banks’ housekeeper, Cousin Topsy (Meryl Streep), Mary Poppins’ whimsical relation and Wilkins/Wolf (Colin Firth), the manager of the bank where Michael works. It’s an incredible cast, right? And everyone is in top form as they sing and dance into our hearts.

Blunt is especially lovable as the prim and proper nanny, devoted to the Banks children — of all ages. She performs her musical feats with seemingly little or no effort — it’s enchanting to behold. And together with Miranda they make as fine a pair as Andrews and Van Dyke.

There are literally too many fabulous displays of fancy footwork to enumerate, but my favorite involved no feet at all. At the end of MARY POPPINS RETURNS, there is one particular number which is truly delightful.

Angela Lansbury has a cameo as the Balloon Lady, and upon choosing just the “right” balloon, each character finds themselves flying above a London park on a beautiful Sunday afternoon. It’s a clever bit of filmmaking by Rob Marshall which closes out this superb film with a deft touch.

Though MARY POPPINS RETURNS doesn’t boast a toe-tapper like “Supercalifragilisticexpialidocious”, the music and lyrics by Marc Shaiman and Scott Wittman are enjoyable enough. Blunt, Miranda and company deliver a heart-warming, entertaining experience for the entire family.

David: Only a grinch could find something wrong with MARY POPPINS RETURNS. There is definitely a lot to like about this film which revisits the famed British nanny some 54 years after Julie Andrews and Dick Van Dyke starred in the original.

Emily Blunt and Lin-Manuel Miranda are the perfect sequels for Mary and Bert (Miranda’s character is named Jack in this version). They are certainly on the same par in their dance routines, and while I believe Andrews had a purer voice, that takes nothing away from Blunt, who is a fine singer in her own right.

The two primary dance scenes are astonishing. Blunt and Miranda make them look effortless, but we can only imagine how much rehearsal actually went into these sequences. They are pure joy — my favorite is the one with Mary and Jack intermingling with animated characters.

Emily Mortimer and Ben Whishaw are Jane and Michael Banks, sister and brother, now adults. Michael is tasked with raising his three children who recently lost their mother. Mortimer was memorable in “The Newsroom” on television, and Whishaw has become a big star with high profile films in recent years. In MARY POPPINS RETURNS they are extremely likeable in supporting roles that are virtual leads. Whishaw creates a character who is truly sympathetic and Mortimer is charming as the doting aunt.

Colin Firth, in a small role playing against type, is an evil bank manager intent on taking over the Banks residence if they fail on their home loan, which has become due. There are two surprise cameos, Jeanne mentions one — I will not reveal the other. Meryl Streep is a delightfully wacky character you have to see to believe. The three young actors playing the children are well cast, both for their acting and their vocals, especially Joel Dawson as Georgie, who is totally adorable!

Jack, the town lamplighter, invents a clever way for five people to get around London on one bicycle, and the flying balloon finale is an interesting special effect. And for a bit of trivia, Julie Andrews was 29 when she made MARY POPPINS — Blunt 35, and Van Dyke was 39 — Miranda 38.