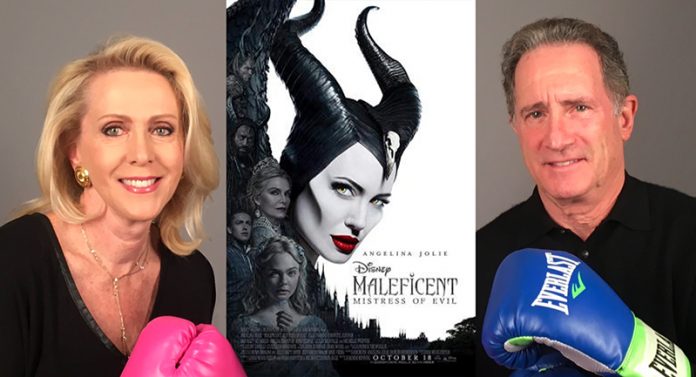 It’s Jeanne and David Kaplan of Kaplan vs Kaplan with the his and her movie reviews of the movie Maleficent: Mistress of Evil, starring Angelina Jolie.

Jeanne: Just about any film with Angelina Jolie is worth a trip to the theater. And after the huge success of MALEFICENT, 2014, it’s easy to understand why Disney would order up the sequel, MALEFICENT: MISTRESS OF EVIL. But this time screenwriters Linda Woolverton, Noah Harpster and Micah Fitzerman-Blue and director Joachim Rønning have created a much darker, and dare I say, much more violent production.

Aurora (Elle Fanning), now Queen of the Moors, has been asked for her hand in marriage by her beloved, Prince Philip (Harris Dickinson, replacing Brenton Thwaites from the first film), much to the chagrin of his mother, Queen Ingrith (Michelle Pfeiffer). To seal the deal, Aurora, Maleficent (Jolie) and Diaval (Sam Riley) have been invited to the palace for dinner. And what could possibly go wrong with this scenario?

During a dustup at the dinner table, King John (Robert Lindsay) is wounded, sending him into a deep sleep. Maleficent is accused of slapping a curse on him (by Ingrith) and all hell breaks loose, with Maleficent departing through a window in full flight. But before she can escape, she is shot with an iron pellet, which is deadly to all feys. She is rescued by Conall (Chiwetel Ejiofor), and whisked off to an underworld where the remaining winged members of a forgotten tribe reside.

Despite a mighty effort by Jolie — and Fanning — to keep MALEFICENT: MISTRESS OF EVIL as entertaining as possible, the faults of the film do not lie with them. Though I am not one to recommend that children be sheltered from a modicum of violence and death — think OLD YELLER — when it serves no purpose is when I object. The writers have concocted this rather bizarre and unnecessary story of Ingrith and her intense hatred  of fairies and all things connected to the Moors.

She relays an inane explanation to Aurora about her father — and now her husband, the King — being too tolerant, blah, blah, blah. It’s slightly ridiculous. Yes, it’s great to see women in positions of power, but did they have to make Ingrith batshit crazy? This doesn’t help the image of powerful women.

And don’t even get me started on the Queen’s minion locking the creatures of the Moors in the chapel and spraying them with a poisonous dust. Seriously, what does that remind you of? Why would Disney think it’s okay to promote the annihilation of the fairies — and the feys — so Queen Ingrith can make her kingdom great again?

Jolie is magnificent as Maleficent. No one raises an eyebrow and sneers as well as she. And her costumes are divine. She and Fanning are quite sweet together — they have managed to reprise their tenderness from the original. Riley provides the comic relief as Maleficent’s sidekick. I just wish he had been given more to do.

Unfortunately, Pfeiffer is extremely disappointing. Her portrayal of the evil Queen is more of a caricature than a fully-drawn character. Part of that is the fault of the writing, but mostly her vengefulness is overplayed in a one-note performance. And Dickinson is flat out awful. It would be easy to blame the script, but in reality he lacks any real enthusiasm for the role.

MALEFICENT: MISTRESS OF EVIL is decidedly more for adults than for children. David will argue that it isn’t even worth it for the older moviegoers, because in a word — it’s boring — his word, not mine. I’ll admit that I was a little shocked that the movie is so slowly paced in parts, which does make it that much less of a kid-friendly outing.

But, there still is Jolie, who is wickedly entertaining and oh, so fun, to watch. She, along with precious Elle, almost make the experience worthwhile — almost.

David:  The good news about this follow-up to the 2014 Disney production of MALEFICENT is that I went into the screening without great expectations. The bad news is that I was right.

MALEFICENT: MISTRESS OF EVIL is laden with special effects that we’ve seen before and repeat over and over, along with constant, overly loud music. What’s worse, the movie is essentially a waste of the talents of Angelina Jolie, Elle Fanning and Michelle Pfeiffer.

The story line about young Aurora (Fanning) marrying Prince Philip (Harris Dickinson this time) for love, and for uniting two very different kingdoms, is not sufficient to sustain anyone’s interest. And the obvious conflict between Queen Ingrith (Pfeiffer) and Maleficent (Jolie) is ho-hum. One interesting character is King John (Robert Lindsay) who desperately tries to change the subject to the weather at the awkward dinner celebrating the young couple’s upcoming nuptials. Another is Sam Riley as Diaval, Maleficent’s right-hand man, er, raven, who provides most of the comic relief.

Overall, the movie is deadly dull, i.e., flat-out boring. Such a shame considering the huge crew behind this effort. The returning trio of Imelda Staunton, Juno Temple and Lesley Manville as the pixies Knotgrass, Thistlewit and Flittle, respectively, are no longer the innovation that delighted moviegoers in the original. In fact, their dialogue is largely drowned out by other factors.

The kids may enjoy MALEFICENT: MISTRESS OF EVIL for a while, but much of the dialogue will be over their heads. And some sequences are too scary for the very little ones. Find TOY STORY 4 and watch it (again?) for a far superior piece of entertainment.

For what it’s worth, I loved it and will see it again! I just hope the 2nd time I go I’m not sitting next to a mother with 8 kids, 2 of whom were crying from fear each time Jolie was on screen.