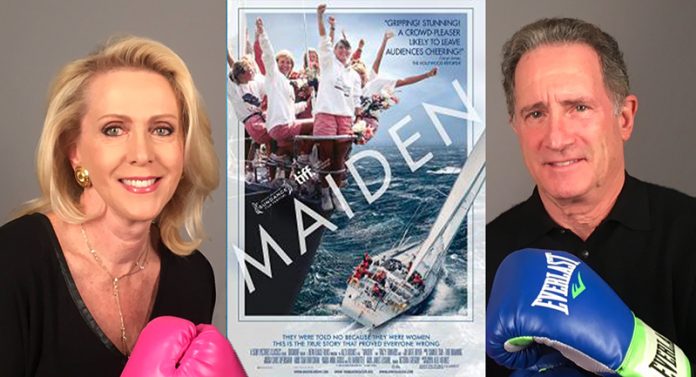 It’s Kaplan vs Kaplan their his and hers film reviews of the documentary Maiden, starring Tracy Edwards.

Jeanne: In 1989 a highly unlikely thing happened! Twenty-six-year- old Tracy Edwards helmed a second-hand racing yacht named Maiden, with an all-female crew, and competed in the Whitbread Round the World Race, which is held every three years. Against all odds — and, trust me, there were plenty — this amazing group of mostly professional sailors managed to accomplish the unthinkable. Writer/director Alex Holmes’ documentary MAIDEN chronicles this unbelievable feat.

Edwards did not grow up in a sailing family. She had an idyllic childhood, as she herself describes in the film, until the age of 10 when her beloved father passed away suddenly. To escape an abusive, alcoholic stepfather, Edwards runs away at age 16 and spends years island hopping, working on boat crews as a cook and stewardess.

In 1985, she begs her way onto a British boat in the 4th Whitbread race, securing a job as the cook. She learns as much as she possibly can about racing and following that experience she is determined to skipper a boat of her own in the 5th Whitbread in 1989-90.

MAIDEN is absolutely riveting — and inspiring. Edwards and her crew of 13, Jo Gooding, one of Edwards’ best friends from childhood, Marie-Claude Keiffer Heys, who was fired by Edwards right before the start of the race, Dawn Riley, the only American, Michele Paret, who originally spoke no English, Sally Creaser, Jeni Mundy, Tanja Visser, Mikaela Von Koskull, who sailed with Edwards on all three of her ventures, Claire Russell, the doctor on board, Amanda Swan Neal, Nancy Harris, Angela Heath and Sarah Davies, who served with the Woman’s Royal Navy Service and only completed one leg of the race in place of Sally Creaser, were all hard working, devoted sailors who were truly committed to this all-female Maiden crew. Howard Gibbons led the shore crew, comprised of several other men and women, for Edwards — functioning as her confidante and friend.

MAIDEN documents the six legs of the 5thWhitbread. No one expected the women to be competitive, so you can imagine the shock when Maiden wins the second and third legs for her class. In the fourth leg, pounding waves cause a leak, with Maiden taking on water. The crew was able to locate and patch the leak, but time was lost.

In the sixth and final leg, Maiden manages to make up some of the time and finishes the overall race in second place. But, for the thousands of spectators who turned out to see Maiden return home, it was a HUGE triumph for Edwards, her crew and the entire town.

MAIDEN is a true nail-biter. These women were beyond courageous — and determined. This is such an excellent example for children, especially girls, about the lesson of never giving up. The publicist who gently chided me to make sure I saw this film is right — it’s a documentary I definitely needed to watch!

David: Beginning in England every three years, a yacht race, formerly known as the Whitbread Round the World Race, is held. This started in 1973 with only all-male crews. At the age of 24, Tracy Edwards maneuvered her way aboard one of the yachts as a cook in the 1985 race. From this experience, Edwards got the “bug” and was adamant about helming her own boat with an all-female crew in the 1989 race.

MAIDEN is her story, with actual footage of their time at sea, which extends over many months, plus interviews with Edwards and her crew 30 years later. This documentary couldn’t be more significant in an age where women are making great strides in their efforts to be on equal footing with men in virtually every aspect of life.

Edwards and her crew faced many obstacles, especially financing, but her previous encounter with King Hussein of Jordan paid great dividends. They managed to overhaul an old boat named Maiden which had raced twice before in the Whitbread, and they did the work themselves. This became especially critical when their vessel started taking on copious amounts of ocean water during the fourth leg of the race. Their intimate knowledge of the Maiden’s makeup salvaged everything they had worked for, not to mention their own lives, as well.

It should be noted that all participants in the Whitbread had time on shore in between the six legs, so they were not on their boats for impossibly long periods. Still, MAIDEN is a testament to the grit and determination of a group of women who ignored all the negative press, et al, of the time. And their incredible accomplishments can be witnessed for generations to come, thanks to director Alex Holmes’ desire to make this film, and the fact that they recorded hours and hours of video tape while Maiden was at sea.