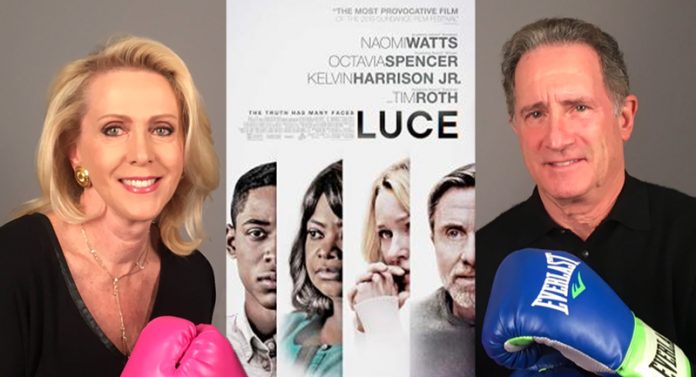 It’s Jeanne and David Kaplan of Kaplan vs Kaplan movie reviews. Here, the duo present his and her view on the movie Luce – starring Naomi Watts, Octavia Spencer, and Tim Roth.

Jeanne: Based on the play “Luce” by JC Lee, director Julius Onah co-wrote the screenplay for his film with Lee. LUCE is billed as a “smart psychological thriller that will leave audiences breathless.” Though I found LUCE interesting, I do not consider it a thriller, nor did it leave me “breathless”.

When Luce Edgar (Kelvin Harrison, Jr.) is adopted from war-ravaged Eritrea in Africa at age seven, his white mother, Amy Edgar (Naomi Watts), cannot pronounce his name, no matter how hard she tried. So instead, she and her husband, Peter Edgar (Tim Roth), renamed the boy Luce.

Now he’s a star athlete in high school, a sterling debater and orator — everyone’s idea of the dream student, including his history teacher, Harriet Wilson (Octavia Spencer). Things begin to unravel a bit for Luce and his parents after Mrs. Wilson makes a shocking discovery in his locker. Is his success a product of nature or nurture, and what is it he seems to be hiding?

Lee’s play is driven by dialogue around “blackness and black identity”. Together Onah and Lee wanted the audience to explore their blind spots, and to appreciate that everyone’s life experiences are different. The fact that Harriet Wilson is an African-American woman and she proceeds to stereotype her students, especially Luce and his friend, DeShaun Meeks (Astor), becomes a source of irritation for Luce, who believes he, and everyone else, should be able to define himself according to his own terms.

DeShaun loses his scholarship because Mrs. Wilson found marijuana in his locker. This enrages Luce who understands that though he and DeShaun are both black, he has the advantage because his parents are white. LUCE makes a pointed effort of defining power — who has it, who doesn’t? And in Arlington, Virginia, where the movie is set, it is definitely Amy, Peter and Principal Dan (Norbert Leo Butz) who represent the community as a whole, whose obsessive desire it is to have a model student such as Luce to showcase as an example of their acceptance of him.

These people are so deep into their self-congratulations over Luce that they have failed to see how they have marginalized those who don’t stack up. But what I find most shocking about Onah’s script is Amy and Peter’s willingness to look the other way when he is clearly lying — and then they lie, also. Maybe it’s because our current president lies so much and so often that this aspect of LUCE depresses me even more. ENOUGH OF THE LYING!

As I stated, I would not consider this movie a real thriller, but it is loaded with exceptional performances. Harrison is completely amazing — he makes it very difficult for us to tell when he may be telling the truth — and when he isn’t. He does an extraordinary job of reigning in Luce’s subtle cracks of rage. We can almost feel his anger boiling up inside him, and yet he manages to keep a lid on it. The very last frame provides a glimpse of what may be coming from this character — who knows?

There are four women in this film, Spencer, Watts, Marsha Stephanie Blake, who plays Harriet’s mentally ill sister, Rosemary, and Andrea Bang, as Stephanie Kim. They represent the layered factions in our society. Watts epitomizes the white entitlement, even while she believes she’s the liberated liberal. Spencer plays the self-righteous product of the 60’s black student who can’t bear to accept anything other than perfection from her pupils and is determined to prove how she is exactly right.

Blake makes us squirm with her stunning portrayal of the poor, seriously disturbed sibling to the obviously brilliant teacher who can’t handle her. And Bang’s Kim is as puzzling a character as I can remember. She doesn’t want to be labeled a victim of abuse by Mrs. Wilson — or anyone else. Like Luce, she is still struggling with her identity.

All four of these actors are to be commended. Their performances are riveting — thrilling actually, but I would have liked to have had Harriet’s character even more fleshed out, and not left hanging at the end.

Though the acting is superb and the underlying currents rich for discussion, LUCE is not the “thriller” I was anticipating. It could be a bit slow at times, and I wasn’t enthralled with Peter — nor Roth, who plays him. The movie is entertaining with respect to the women who inhabit their roles — and Harrison, whom I’m sure we’ll be seeing plenty more of in the future.

David: LUCE is a psychological drama — I hesitate to use the word “thriller” as described in the promos — that manages to keep the audience engaged throughout, primarily due to fine acting by Kelvin Harrison Jr. as the title character. He plays a high school senior and class valedictorian who happens to be African-American. He is a model student and track athlete with a bright future. However, there is some doubt about who he really is, and that’s the crux of the film’s dilemma.

Luce has a like/dislike relationship with his history teacher, Harriet Wilson (Octavia Spencer). When she uncovers something suspicious in his school locker, combined with a paper he writes about a revolutionary historical figure, we are left to ponder if he is responsible for some nefarious happenings involving Mrs. Wilson.

Defending him unflinchingly is his adoptive mother, Amy Edgar (Naomi Watts), and to a lesser degree his adoptive father, Peter (Tim Roth). A meeting at school, which is essentially an intervention, conducted by Principal Dan (the excellent Norbert Leo Butz) leaves the audience with more questions than answers. It is only the final scene of LUCE that gives us a strong hint of Luce’s true makeup.

The film is certainly intriguing. The articulate Luce receives accolades from everybody for his public speaking at school assemblies. However, a black classmate named DeShaun Meeks (Astor) is a possible suspect for what happens to Mrs. Wilson, but that’s too easy a solution. Writer JC Lee, who adapted the screenplay from his own stage play, plus director Julius Onah, know full well that savvy movie audiences require a larger mystery. As Luce says himself in one conversation with his parents, you never really know what’s happening in other people’s lives. How prophetic.

LUCE is yet another opportunity for Spencer to showcase her acting talents. As in “Ma” earlier this year, she really loses herself in her characters. And Watts has been a favorite of mine ever since her Oscar-nominated turn in 21 GRAMS (2003).