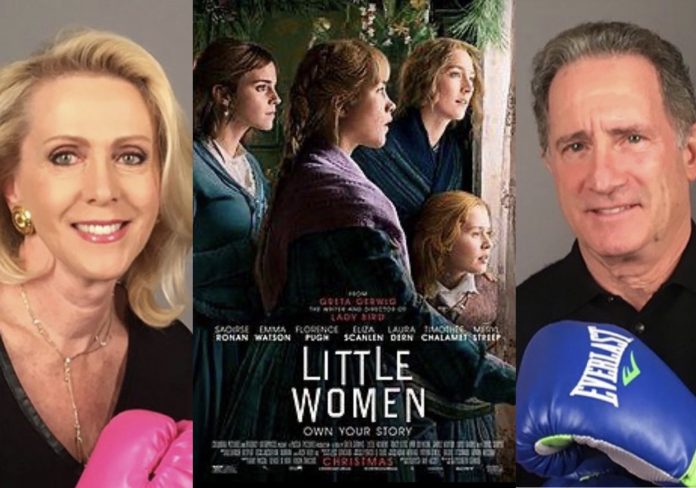 Jeanne:  Director Greta Gerwig has certainly captured the essence of Louisa May Alcott’s “Little Women” and made it her own. Though there have been MANY versions before Ms. Gerwig’s LITTLE WOMEN, who adapted her own screenplay, she has chosen to focus on the March sisters as young adults. With Jo March (Saoirse Ronan), Alcott’s alter ego, leading the way, each of these women is set on making their own choices — living the life they desire.

Jo is the ringleader of this merry foursome, which includes Meg (Emma Watson), Amy (Florence Pugh) and Beth (Eliza Scanlen). Their father (Bob Odenkirk) has been gone for a long time fighting in the Civil War. Their mother, or Marmee (Laura Dern), has been caring for her four daughters — and half the county — in her husband’s absence.

The girls’ Aunt March (Meryl Streep) is a wealthy spinster with a sharp tongue. She doesn’t approve of Jo or her chosen profession as an author. She insists that each of them makes a good marriage and is greatly disappointed that Meg has chosen John Brooke (James Norton), a poor schoolteacher.

Aunt March had originally promised to take Jo to Europe for an extended stay. But Jo has turned down her best friend, Laurie’s (Timothée Chalamet), proposal of marriage and escaped to New York City to write. Instead, Aunt March invites Amy to accompany her. She believes Amy is the only one now who can “save” the family.

This is one of those classics that never gets old. And with Gerwig’s take, it feels fresh and timely. Jo is so determined to never marry — a splendid idea if you ask me — and she berates poor Meg for choosing matrimony over the theater. Jo’s convinced that Meg could be a well-known actor, but Meg loves John and just wants to make a life with him — though at times she questions her decision.

Gerwig has assembled an exemplary cast. Ronan, Watson, Pugh and Scanlen are wonderful together, exuding the sisterly love Alcott was so driven to impart. But it is Ronan who commands the screen. Her intensity is palpable, and her playfulness is endearing. She and Chalamet were in LADY BIRD in 2017, so the easy familiarity they have going feeds right into the deep friendship between Jo and Laurie.

Up until now, in other adaptations of LITTLE WOMEN, I’ve always been so disappointed that Jo and Laurie don’t end up together. Here, the relationship has a totally different feel, though we know they care deeply for one another, it makes sense through Gerwig’s eye that they marry other people.

Streep is a real hoot as the ornery, unmarried aunt. It’s a perfect role for her — she can roll her eyes as much as she likes. Dern makes a more than acceptable Marmee, a part that is almost forgettable. Tracy Letts is just so good in anything. He plays Jo’s publisher, Mr. Dashwood, and though it’s a small part, Letts makes Mr. Dashwood unforgettable.

LITTLE WOMEN is not only about the acting. It is superbly photographed by Yorick Le Saux with an enchanting score by Alexandre Desplat. It truly is one of the best films of the year. And guys — quit being so sexist — go see this beautiful movie with your wife, mother, daughter, girlfriend, friend!

I promise — you will enjoy it!

David: It’s not like Jeanne had to drag me — kicking and screaming — to the screening of LITTLE WOMEN. After all, I will see anything that stars Saoirse Ronan or Timothée Chalamet — not to mention Meryl Streep, Laura Dern and Emma Watson among other notables in the cast. However, I was not a Greta Gerwig fan — really disliked her 2012 film FRANCES HA. Gerwig writes and directs this version of LITTLE WOMEN, and now I’m pleased to report she has won me over.

Ronan, especially, is superb in the lead role as the second-oldest March sister, Jo. Louisa May Alcott, the author of “Little Women”, based her writing on her own family’s experiences, including those of older sister Meg, played by Watson, plus younger sisters Amy (Florence Pugh) and Beth (Eliza Scanlen). And Pugh is also quite magnetic in the complex role of Amy, in love with Laurie (Chalamet), but conflicted because he happens to favor Jo.

Chalamet distinguishes himself in yet another role as Laurie, the rich boy next door — a performance that couldn’t be further from his recent portrayals in THE KING and BEAUTIFUL BOY. It seems Chalamet can do no wrong as this about-to-be 24-year-old’s career keeps advancing. Playing Laurie’s father is Chris Cooper who has an endearing relationship with Beth, the sickly sister who excels at the piano. She is invited by Mr. Laurence to visit anytime to play his piano.

LITTLE WOMEN examines both the comic and tragic events of the March sisters, their mother Marmee (Dern) and their Aunt March (Streep). It’s a totally entertaining epic, after the Civil War, that everybody can enjoy with its PG rating. And let’s not forget the exhilarating music by the great composer Alexandre Desplat — need I say more?

Next City Council Meeting Will Be Via ‘Hybrid’ In-Person / Teleconference