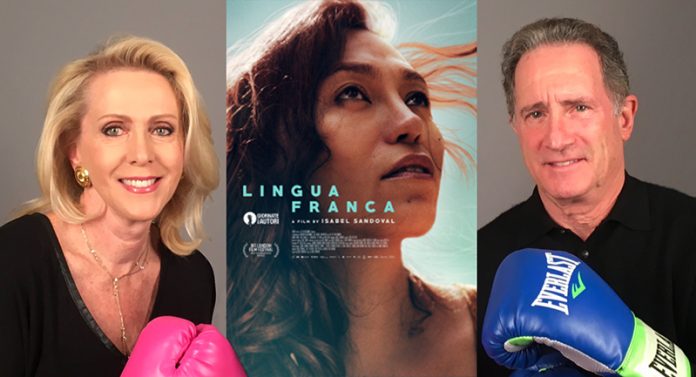 Jeanne and David Kaplan of Kaplan vs Kaplan are BACK! Here are the his and her their film reviews of the movie Lingua Franka, starring Isabel Sandoval.

Jeanne: Written, directed, edited and starring Isabel Sandoval, LINGUA FRANCA has the distinction of being the first film by an openly trans woman of color screened in competition which happened at the 2019 Venice International Film Festival. This is Ms. Sandoval’s third feature and she has already caught the attention of many notables in the film industry, including Ava DuVernay whose company ARRAY Releasing is responsible for LINGUA FRANCA’s distribution.

LINGUA FRANCA takes place in Brooklyn’s Brighton Beach neighborhood where Olivia (Sandoval) is the live-in caregiver for Olga (Lynn Cohen), an elderly Russian woman. But everyday, Olivia, who is an undocumented Filipina, is wracked by the fear that she will be caught and deported. She has witnessed others dragged off the streets of New York by ICE agents. She had arranged to pay a young man to marry her for a green card, but he met another woman and backed out of the deal.

Things become even more complicated for Olivia when Olga’s adult grandson, Alex (Eamon Farren), enters the picture as another person assigned to help with Olga’s care. Olivia develops romantic feelings for Alex and a relationship develops. However, he doesn’t know that Olivia is trans gender and she doesn’t tell him — but he does find out.

The fact that Sandoval herself is an openly trans woman imbues her screenplay with an honesty unparalleled by other filmmakers. LINGUA FRANCA exposes the constant fear lived every day by trans people. And in Olivia’s case the one terror is compounded by another. The great possibility of rejection because of your gender choice is exacerbated here by the real potential for deportation.

Sandoval doesn’t shy away from those emotions in her narrative, nor does she use a sledgehammer to drive them home. Her writing is beautiful and informed, while her acting is poignant, heartbreaking — and strong. There is nothing subtle about LINGUA FRANCA — we get the message loud and clear about the everyday struggles of being an undocumented worker during these bleak times. And we can also relate to Olivia/Sandoval’s need for love and acceptance like the rest of us.

Though LINGUA FRANCA does take a while to embrace its subjects — the script is perhaps a little off kilter in the beginning — Sandoval does manage to turn it around beautifully. She and Farren are great together actually, even though I didn’t care for his casting initially. They end up having wonderful chemistry — a favorite scene has them role playing in a bar.

And one must admire Sandoval. She doesn’t play it safe. LINGUA FRANCA’s ending is not what we are expecting. But while it is sad, it is also hopeful.

This movie will open in some theaters and on Netflix August 26th.

David: LINGUA FRANCA is notable for its director, writer, producer and star. Isabel Sandoval is all of these and more. Her movie gained respect and honors at the 2019 Venice International Film Festival because it is the first movie to be directed and shown competitively by an openly trans woman of color.

The well-established director Ava DuVernay’s production company ARRAY Releasing, established in 2010, distributed the film as it fits perfectly into DuVernay’s mission to promote female filmmakers. As for Sandoval, she is a remarkable actress in LINGUA FRANCA as demonstrated in one scene in particular. Her character Olivia, a non-citizen of the U.S. from the Philippines, is involved with Alex (Eamon Farren), a straight American man. She has not told him she is a trans woman. They have become romantically involved and the tension mounts as they embrace in bed. When she breaks down inconsolably because of her dilemma, it is a memorable sequence and heart-wrenching to witness.

Alex is the grandson of Olga (Lynn Cohen), an elderly woman for whom Olivia is a caretaker. The recently deceased Cohen had a notable career, and some will remember her as Cynthia Nixon’s housekeeper, Magda, on “Sex and the City” and a frequent judge for many years on “Law and Order”. In LINGUA FRANCA Cohen is delightfully daffy as she struggles with her early dementia. She was 86 when she passed away in February.

Farren plays Alex with all the reality of a smitten man who is about to learn what could be a devastating secret about his beautiful lover. Much of the intrigue of LINGUA FRANCA lies in our anticipation of how he will react when he finds out the truth.

Sandoval’s screenplay about a transgender in a real-life situation creates a  compelling scenario. The director earns our empathy and our respect as we can never imagine what a trans individual is likely to endure throughout a lifetime.

Watch for this unique film opening in some theaters and on Netflix beginning August 26th.