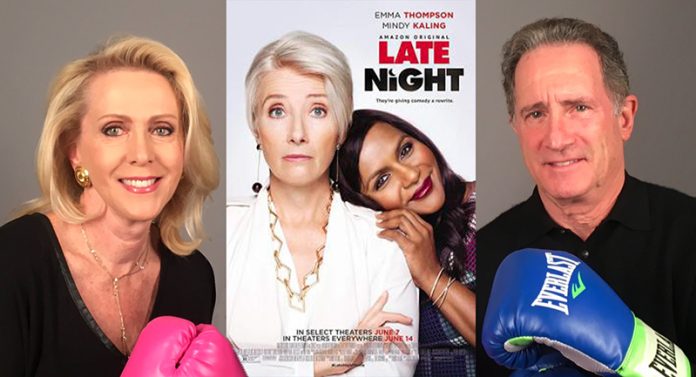 Jeanne and David Kaplan are back with Kaplan vs Kaplan movie reviews of the movie Late Night, starring Emma Thompson.

Jeanne: Written and produced by Mindy Kaling, who stars along with Emma Thompson, LATE NIGHT is a biting, often hilarious view of women in the workforce, who must not only contend with misogynist male co-workers, but a female boss who doesn’t particularly like women, as well. Kaling, who has broken several barriers herself, has taken her experience of late-night comedy and translated it into a full-fledged hit.

Thompson plays Katherine Newbury, a legendary late-night talk-show host who has been at the top of her profession for almost 30 years. Her entire staff is male. They also have become complacent over time and Katherine’s ratings have plummeted. When one of her writers is fired for asking for more money, Brad (Denis O’Hare), Katherine’s executive producer, is tasked with hiring someone new and takes a chance on Molly Patel (Kaling).

Molly, who is a chemical plant efficiency expert from a suburb in Pennsylvania, has been a lifelong devotee of Katherine and her show. On a lark, she shows up for the job interview and Brad, knowing that the writing staff needs new ideas, hires Mollymuch to the chagrin of the guys.

But Molly is driven and determined — and funny. Not all of her initial suggestions go over well, but eventually she perseveres, and the show definitely begins to turn around. Unfortunately, Katherine’s boss, Caroline (Amy Ryan), a network executive, has made other arrangements and is planning to replace Katherine with a younger, hipper comic, Daniel Tennant (Ike Barinholtz). Katherine and her staff have their work cut out for them if Katherine and the rest want to keep their jobs.

Kaling is definitely accomplished as a writer — and performer. She has an innate sense of what is truly funny, like walking down the street in New York City feeling all optimistic and then getting a trash bag full of garbage thrown at her head. And she also has the ability to pen the straight stuff. Katherine eventually must face her husband, Walter (John Lithgow), after news of her fling with one of her writers, Charlie Fain (Hugh Dancy), comes out, and here again, Kaling’s writing is spot on. She can manage the tender/tough moments as well as the comedic.

Directed by Nisha Ganatra, a barrier breaker herself as a woman-of-color television director, LATE NIGHT is an exemplary example of the power of women. And one of my favorite aspects of this film is Kaling’s minimal use of bathroom humor. In fact, the only time it comes up is during Tennant’s stand-up routine. Which proves that nasty, yucky lines are simply not necessary in a successful comedy.

The cast of LATE NIGHT is flat out terrific. Thompson, who is always fabulous, has never been better. Katherine is vicious, cutthroat and unapologetic — and you can plainly see that Thompson revels in this script. She’s dynamic, with another Oscar nom possibly coming her way.

And of course, Kaling is perfect because she wrote it for herself. She is totally delightful — so, so funny and yet humble in her execution. I literally could watch her in anything.

But they’re all good, especially Katherine’s original male team, O’Hare, Dancy, John Early, Paul Walter Hauser and Reid Scott. Scott portrays Tom Campbell, the head monologue writer, and he takes the longest to embrace Molly. This job is his “birthright” because his father was one of the original writers for the show, so initially he’s a real pain to poor Molly — and Scott is masterful at being a true meathead. He’s great!

LATE NIGHT is intelligent, laugh-out-loud and ultimately very entertaining. As David and I have often stated, a great comedy is the most difficult movie to make. Kaling and her cast and crew have managed the impossible.

David: In her role as late-night talk-show host Katherine Newbury, the consummate Emma Thompson is impeccable, giving an Oscar-caliber performance reminiscent of Meryl Streep in THE DEVIL WEARS PRADA. Her LATE NIGHT character is stubborn to a point, but pragmatic enough to know her veteran team of all-male writers needs fresh blood. Besides, a network exec, Caroline Morton (Amy Ryan), has told Katherine she is being replaced due to low ratings.

Her executive producer, Brad (Denis O’Hare), hires long-time fan Molly Patel (Mindy Kaling) as a writer, much to the chagrin of Katherine’s male staff. Molly is inexperienced but fearless in terms of presenting her own ideas about how to salvage the show.

I liked very much how this film has Molly gaining the respect of the veteran writers after their initial reluctance to embrace her hiring. Although this is completely predictable, it’s accomplished in a gradual and credible manner. Kaling, who wrote the screenplay and co-produced the film, has injected much humor to lighten the prospect of Katherine’s demise.

Little things mean a lot in LATE NIGHT. Because Katherine doesn’t know the names of her team of writers, she assigns them numbers. Later when she goes around the conference table and actually calls them by name, she still refers to the one guy whose name she can’t recall as Number 8. And when she and Molly interact at a crucial time of the storyline, Molly hands Katherine a glass of water and Katherine promptly interrupts the conversation to ask if the water is filtered.

LATE NIGHT is funny and entertaining. It is a prime example of women who believe in themselves and stand up for what they want, even in circumstances where the odds are against them. Kaling and others brought on Nisha Ganatra to direct, who among other TV shows, helmed Kaling’s “The Mindy Project”.

When Ganatra read the script for LATE NIGHT, she realized that she was Molly in terms of her own struggles. As for Kaling, she lamented the fact that currently there are no female late-night talk show hosts, the last being Joan Rivers in the 1980s. That show lasted less than a year.

LATE NIGHT works because the writing is so solid — Jeanne likes that aspect — and Kaling and Thompson have terrific chemistry. It should be noted that John Lithgow plays Katherine’s husband and they have their own issues to further complicate Katherine’s life. As always, Lithgow is supremely engaging in this role. I also liked the turns by Ryan and O’Hare.

The audience certainly gets a glimpse behind the scenes of a late-night talk show in this movie. But see it to enjoy Thompson and Kaling.