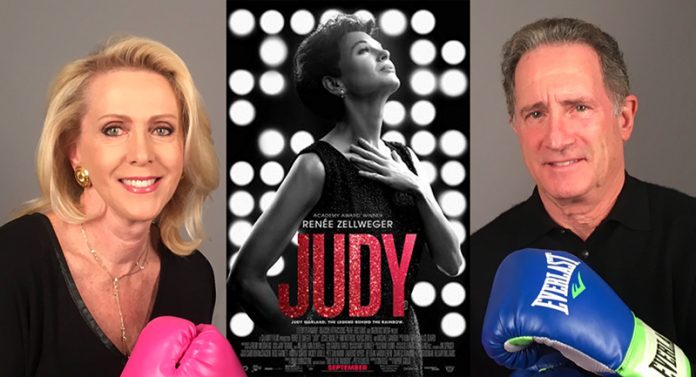 Jeanne: Renée Zellweger plays Judy Garland in the new biopic helmed by the renowned British theatre director, Rupert Goold. JUDY focuses mainly on Garland’s attempted renaissance at “The Talk of the Town” nightclub in London, where all five weeks of her show were sold out in advance.

The screenplay by Tom Edge relies heavily on flashbacks to establish her childhood struggles during the filming of THE WIZARD OF OZ. Manipulated and abused by Louis B. Mayer (Richard Cordery), 16-year-old Judy (played by 15-year-old Darci Shaw) was fed a plethora of pills, one to help her sleep,  one to wake her up and a diet pill to keep her from gaining weight.

Judy began working at the age of two and never stopped. When JUDY opens, she is performing on a stage with her two younger children, Lorna (Bella Ramsey) and Joey (Lewin Lloyd). She’s lost her home and is reduced to performing at a pay grade way below her worth. When they are kicked out of their hotel in Los Angeles, Judy has no recourse but to land on the doorstep of her ex-husband, Sidney Luft (Rufus Sewell).

She and Sid are locked in a custody battle over the children, and in a desperate attempt to regain some financial stability, Judy accepts the invitation of Bernard Delfont (Sir Michael Gambon) to perform at his posh club in London, where she is still very much loved. Upon her arrival she is met by Rosalyn Wilder (Jessie Buckley), who is tasked with keeping the unreliable performer in hand.

Sinking back into her old habits, with performances ranging from brilliant to tragic, Judy walks out the stage door one night to find a gay couple, Stan (Andy Nyman) and Dan (Daniel Cerqueira), waiting for her. To their huge surprise, she suggests they have a late dinner, but when they can’t find an open café, Judy goes home with them for an omelet. Their devotion to her is hugely apparent, as her music has helped them through the legal persecution of gay couple. She returns their affection with immense grace and appreciation for their struggles.

A much younger man, Mickey Deans (Finn Wittrock), with whom she spent one flirtatious night in LA before departing for London, shows up at her hotel suite one morning. He promises her a big deal with a chain of cinemas in the U.S. which will enable her to stop singing and get her children back. After a whirlwind affair, they marry, and Deans becomes Judy’s fifth husband. However, this romance is short-lived, when the deal falls through and the fighting begins. Following a disastrous appearance on stage, Delfont cancels her remaining shows. But Judy won’t be denied one last song — and it’s a doozy!

It’s an understatement to declare that Zellweger gives an Oscar-worthy performance. She captures all the subtle — and not so subtle — nuances of Ms. Garland. It was a painstaking effort. Although Zellweger could already sing, she studied with a vocal coach for an entire year before the four months began with JUDY’s musical director, Matt Dunkley.

But it isn’t just about her remarkable ability to sing, it’s also so incredible how Zellweger has mastered Garland’s movements and mannerisms. She even had to reshape her posture — and her costumes. Garland was witty — and very funny — so Zellweger, with her comedic background, is able to maximize that aspect of Garland’s personality. It’s a stunning, truly amazing portrayal.

JUDY also boasts a very gifted ensemble cast. Buckley was able to meet the real Rosalyn Wilder to glean a lot of information regarding her relationship with Garland. They did develop a close bond during their time together, and Buckley and Zellweger prove that. Sewell, though a small role, is pivotal as Luft. He and Garland loved each other, they just couldn’t live together, with Sewell driving that point home.

Costume designer Jany Temime and hair and makeup designer, Jeremy Woodhead, must be mentioned for their outstanding efforts in making Zellweger over into Garland. It’s quite a feat because the resemblance is astounding.

But none of that matters without the fantastic, magical performance by Zellweger. When she belts out such Garland favorites as “Get Happy”, “For Once in My Life”, “Come Rain or Come Shine”, “The Trolley Song” and ultimately “Over the Rainbow”, it’s pure theatrical joy!

David: It’s obviously still early, but we now have a front-runner for Best Actress at the next Academy Awards telecast. Renée Zellweger portrays iconic singer Judy Garland in JUDY, which chronicles Garland’s final months before alcohol and drugs contributed to her premature death. For what it’s worth, Zellweger was born 59 days before Garland died in June 1969.

The movie is very good, but it is Zellweger’s extraordinary performance that makes this film special. In fact, it will take five exemplary female turns before the end of 2019 to deny Zellweger a chance at her second Oscar. She won previously as Best Supporting Actress for COLD MOUNTAIN (2003).

We know from her role in CHICAGO (2002) that Zellweger has a great singing voice, but she still prepared for more than a year for this part. She does all her own vocals in JUDY, and while she doesn’t have the unique gifts of Judy Garland — who does?? — her voice is splendid. She was also outfitted for minor facial prosthetics, and the resulting likeness is almost startling. And Zellweger is a superb dancer which is a great asset for JUDY.

The film suggests that Garland’s drug abuse started with THE WIZARD OF OZ, and it also portrays Louis B. Mayer, the director, as a bastard who denied her regular meals so she could be sure and maintain her figure as the trim Dorothy. Toto’s diet in the movie is not disclosed.

Finn Wittrock plays her fifth husband, Mickey Deans, and Rufus Sewell plays Sidney Luft, an ex-husband who fathered her two younger children, Lorna and Joe. To support her kids, Judy moves to London to resume her singing career. In case you were wondering, Liza Minelli, her older daughter, is portrayed briefly in one scene. Minelli, now 73, didnot sanction this film about her mother. Jessie Buckley is effective as Garland’s young British manager Rosalyn Wilder, who bravely attempts to keep her star in line, i.e., ready to go on stage sober.

A middle-aged gay couple named Stan and Dan (Andy Nyman and Daniel Cerqueira), super fans of Garland, almost steal the show. They are also an integral part of the movie’s final scene. However, the finale could not have been staged any better by director Rupert Goold. It includes a song that is full of hope, something in relatively short supply these days. I suggest you have a hankie handy.