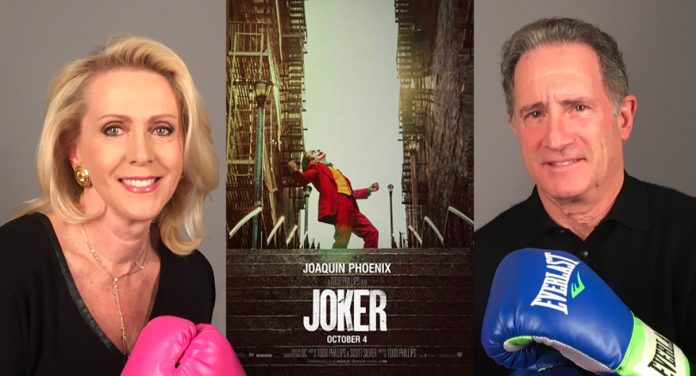 It’s Jean and David Kaplan of Kaplan vs Kaplan with the his and her movie reviews of The Joker, starring Joaquin Phoenix.

Jeanne: Because of my pure disgust for JOKER, this will be an abbreviated review. As far as I’m concerned, Todd Phillips’ origin story of the DC Comics character Joker, Batman’s nemesis, with Joaquin Phoenix in the starring role, is a meandering piece of garbage much like the filth lining the streets of Gotham City. (The sanitation workers are on strike.)

Purported to be a significant commentary on the social ills of our time, JOKER only exacerbates the appeal of violence to individuals who are drawn to its dark and disturbing content. There is not one single redeeming aspect of this movie. Though others are praising Phoenix for his performance, his insane ramblings are merely that — and nothing more.

Though Phoenix lost over 50 pounds to play this character, Arthur Fleck, a profoundly unstable man, there is no mystery here. He endured a brutal childhood at the hands of his psychotic mother, and now the violence that he perpetrates is gratuitous and horrific.

Phillips and his co-writer, Scott Silver, have penned a script that is unnecessarily gruesome — and not particularly entertaining. Though much of Phoenix’s portrayal subjects the audience to one shocking and graphic scene after another, his incoherent mumblings, at times, become boring.

There is a great deal of controversy surrounding JOKER and now I see why. It’s unconscionable that theaters around the country will now be forced to secure extra protection for moviegoers. There is great concern that there will be reaction to this movie by copycat mass murderers, and law enforcement is already seeing threats on the dark web.

It would be one thing if JOKER deserved all the hype, but, alas, it does not. It’s a deeply disturbing movie — truly a “Don’t Bother!”

David: Joaquin Phoenix, never an actor to shy away from bizarre roles, plays Arthur Fleck. I’ll be honest. I could not take my eyes off Phoenix who is in virtually every frame of JOKER. The extreme violence in this film borders on the gratuitous, although three wise guys on a New York subway train get what’s coming to them. The reality is that we’re not always sure when Arthur will explode in a violent episode. There is ample foreshadowing, however, which creates suspense throughout.

Arthur is a ticking time bomb once he gets off his meds, which happens because the clinic he regularly attends loses its funding. So he loses his source of prescriptions for his condition. There is also the undeniable warning from writers Todd Phillips and Scott Silver that prominent politicians should refrain from insulting members of the general public. Yes, irresponsible rhetoric — sound familiar? — can have dire consequences.

Phillips also directs JOKER which is far removed from his work on the original THE HANGOVER. This may also explain why Bradley Cooper is listed as a producer on the film.

Robert De Niro plays late night talk show host Murray Franklin, a role which may evoke memories of an early De Niro film called THE KING OF COMEDY. I thought De Niro’s character in JOKER is far too complacent — blame the writing — when Arthur appears as a guest on his show spewing dialogue that is increasingly threatening. Veteran character actors Shea Whigham, Bill Camp and Glenn Fleshler have key supporting roles, although Leigh Gill steals the show as little person Gary, a colleague of Arthur’s at their company which farms out clowns for special events.

Despite Phoenix’s riveting performance — Jeanne will likely disagree with that assessment — I cannot recommend this movie. Do we really need a film with such graphic physical mayhem that may inspire copycats?