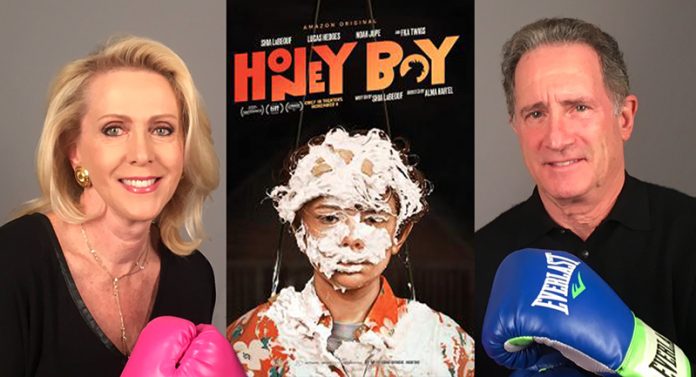 Jeanne: While writing HONEY BOY was surely cathartic for Shia LaBeouf, for the rest of us it is painful to watch the gut-wrenching relationship with his father he endured as a child. There is nary one bright, happy moment in this 97-minute expose of a man who exploits his own son for financial benefit, and thus, it is not a film I can recommend.

In 2017, twenty-something Otis Lort — the character representing LaBeouf and played by Lucas Hedges — is ordered by the courts into rehab. His therapist, Dr. Moreno (Laura San Giacomo), convinces him to journal about his troubled childhood, focusing on his especially devastating experiences with his father, James Lort (LaBeouf). Flashing back to when he was 12, and here he is portrayed by Noah Jupe, Otis remembers the trauma — and occasional love — which shaped his dramatic childhood.

LaBeouf’s real father, Jeffrey, was very much like the character James. He was a rodeo clown, ex-con, veteran — and an alcoholic with a terrible temper. LaBeouf does a superb job creating this version of his dad and acting it. He goes from a quiet reflection to a rage in a matter of seconds.

He threatens to kill the one person, Tom (Clifton Collins Jr.), who offers some semblance of normalcy to Otis. He’s just jealous, vindictive and paranoid — and LaBeouf’s performance is hair-raising. I appreciate the difficulty in playing a character so similar to your own father.

All three, LaBeouf, Hedges and Jupe are amazing. Hedges is just so at ease in front of the camera and he excels in roles like this. They’re perfect for him. He can go out in the woods and perform a primal scream with the best. Jupe is astounding — and his portrayal is incredibly insightful. When he’s pleading with James to just be a regular dad, it’s heartbreaking. He and LaBeouf share a definite chemistry, but James’ brutality can be overwhelming — which leads to my distaste for HONEY BOY.

Director Alma Har’el and LaBeouf are friends as well as collaborators. She also helped him fine tune the script. And when they were working on it, I wish they would have included at least one solitary scene of lightness. HONEY BOY is undeniably raw and honest, but with no relief from the constant drama, it’s beyond depressing.

FKA twigs, the recording artist, has a small part as Shy Girl, who befriends young Otis. They share some sweet, tender moments, but it’s not nearly enough to mitigate the overbearing sadness and melodrama which dominates this film. It is simply not an entertaining experience I can recommend.

David: Shia LaBeouf wrote the screenplay and stars in his latest film HONEY BOY. The movie represents his feature length writing debut, and he did it while in therapy/rehab for problems related to alcohol addiction.

LaBeouf’s performance is largely autobiographical in the sense that it represents his real-life father Jeffrey, with whom he had a difficult and complicated relationship. In HONEY BOY, LaBeouf is James Lort, father to Otis Lort (played as a 12-year-old by Noah Jupe and as an adult by Lucas Hedges). James’ long hair and sideburns, accompanied by tattoos, oversized eyeglasses and the occasional do-rag, seem to be viable complements to his rough nature.

He loves his son, but frequently mistreats him, verbally and physically. Jupe and Hedges are both exceptional, particularly Jupe who is wise beyond his years. The now 14-year-old actor was in A QUIET PLACE, and will be seen in its sequel. He also plays Christian Bale’s son in FORD v FERRARI. The kid is as busy as he is a good actor. As the title character in director Alma Har’el’s film HONEY BOY, Jupe almost steals the show from his on-screen father.

James has a temper, often brutal. LaBeouf adequately displays James’ struggle to be a good father to Otis, and when he throws young Otis’ “Big Brother” Tom (Clifton Collins Jr.) into the motel pool, we’re a bit shocked but realize he’s basically dealing with his own inadequacies.

The movie is all dreary depression. I momentarily liked the scene where young Otis and James are juggling in their motel room, something the stars learned to do while making the film. It could have been a welcome respite from their father-son wrangling, until James forces Otis to do pushups for missing a ball.

HONEY BOY has all the earmarks — acting, writing, directing — to be a critics’ darling. And while the making of this movie surely represents something of a catharsis for LaBeouf, it lacks real entertainment value for the average moviegoer. The closing scene is meant to be an uplifting statement for the relationship between James and Otis, but it lacked real empathy for me.