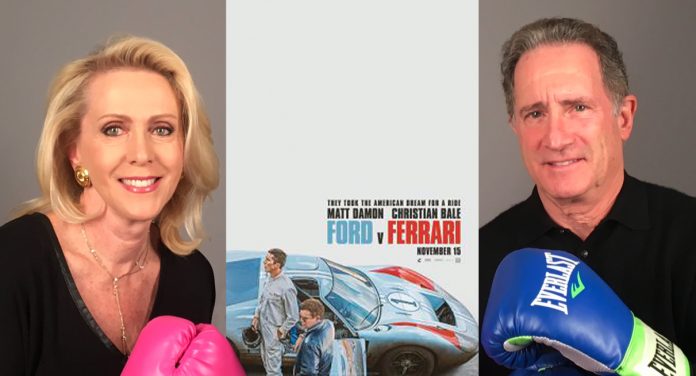 Jeanne and David Kaplan of Kaplan vs Kaplan, give us the his and her movie reviews on the film FORD V FERRARI, Starring Brad Pt and Christian Bale.

Jeanne: Spectacular racing sequences dominate the entertainment value of FORD v FERRARI. The 24 Hours of Le Mans in France in 1966 is the focal point of director James Mangold’s film, based on a true story, which was written by Jez Butterworth, John-Henry Butterworth and Jason Keller. Originally Tom Cruise and Brad Pitt were attached, but when that didn’t pan out, Matt Damon and Christian Bale locked down the two starring roles.

Enzo Ferrari’s (Remo Girone) racing program, Scuderia Ferrari, won the 24 Hours of Le Mans in 1958, and then each year from 1960 to 1965. When Henry Ford II (Tracy Letts), the CEO of Ford Motor Company, loses his chance to purchase Ferrari in 1963, he and his vice president, Lee Iacocca (Jon Bernthal), hire automotive designer, Carroll Shelby (Damon), to design a race car to beat Ferrari.

Shelby and British race car driver, Ken Miles (Bale), already have a team in place and begin the often-frustrating task of building the Ford GT40. Leo Beebe (Josh Lucas), a Ford executive and someone who has Henry Ford’s ear, dislikes the brash Miles and does everything in his power to get rid of him. But Shelby will not be denied, and after some devious machinations, he wins out and Miles secures the job as driver in the Le Mans.

Phedon Papamichael, the cinematographer (SIDEWAYS, 2004, 3:10 TO YUMA, 2007, THE MONUMENTS MEN, 2014), has photographed the most stunning racing scenes in recent memory, making the audience feel like we are right in the car with Miles. The pace, along with the angles, are breathtaking — and nerve wracking.

Since the Le Mans is actually 24 hours, we get to experience the drivers’ masterful work, day and night, and all weather, including rain — at night — which presents a whole new set of problems. But none of this is too much of a challenge for Mangold and Papamichael. The filming of the racing is exquisite, but perhaps with FORD v FERRARI being two hours and 32 minutes, some of it could have been edited just a little tighter.

Damon and Bale share a great camaraderie. Both are extremely accomplished, with many awards to complement their work. It is apparent both actors respect each other and their good will translates to their convincing portrayals as close friends. All of this makes it much more believable when Miles is eventually betrayed by Henry Ford and his lapdog, Beebe.

Letts turns in his usual superb performance, and Lucas is smarmy as hell as Beebe. The entire cast is terrific, in fact. And Noah Jupe, who portrays Shia LaBeouf’s son in HONEY BOY just out in theaters, plays Miles’ son Peter. He is the most adorable child — and such a wonderful actor.

So, what is wrong with FORD v FERRARI? I’ve been struggling with this question. The screenwriters have penned a solid script based on this incredible story, but something is lacking. Perhaps it’s the length — 2 ½ hours is simply too long — or the off-track storyline isn’t as engrossing as the racing. Whatever it is, FORD v FERRARI may be a good movie, but it’s not a great one.

David: You might think the promotional posters/billboards for FORD v FERRARI indicate a competition between the characters played by Matt Damon and Christian Bale. The reality is that real-life auto racing figures Carroll Shelby (Damon) and Ken Miles (Bale) were, indeed, the best of friends. And it shows in the superb performances by these two mega stars, guided by the expert writing of three contributors.

This is a very exciting film, and despite its length, which Jeanne will point out, it’s one of the year’s best movies. The racing scenes with Bale behind the wheel are tense and realistic — kudos to veteran cinematographer/Oscar nominee Phedon Papamichael — and to Bale for taking extensive driving lessons. The conversational repartees between Shelby, Miles, Henry Ford II (Tracy Letts), Enzo Ferrari (Romo Girone) and Leo Beebe (Josh Lucas) are just as riveting thanks to the top-notch screenplay.

Another cast standout is Jon Bernthal as Lee Iacocca — before he became famous for transforming Chrysler — who suggests to Henry Ford II that the Ford Motor Company compete with Ferrari for top racing honors at 24 Hours of Le Mans in France in 1966. And I liked the turn by Caitriona Balfe who plays Miles’ wife, Mollie, also mother to their young son, Peter (Noah Jupe). Lucas holds his own with Damon and Bale as the obnoxious, arrogant second-in-command (aka The Deuce) to Ford II.

Director James Mangold was at the helm of two movies which produced Oscars for Angelina Jolie (GIRL, INTERRUPTED, 1999) and Reese Witherspoon (WALK THE LINE, 2005). So clearly the man knows how to extract top performances from his cast. The conflict and competition between Ford and Ferrari feels very real. FORD v FERRARI is one of those films that demands to be seen on the big screen.