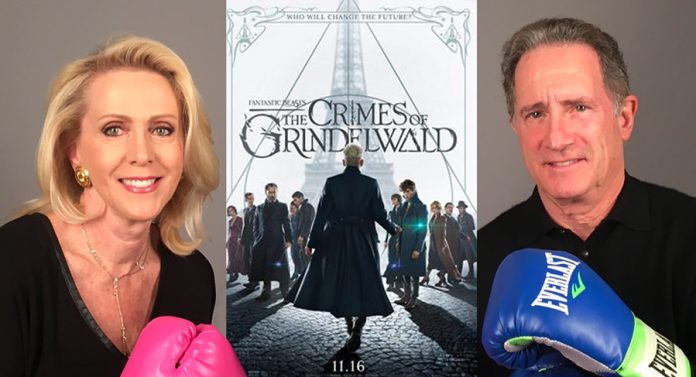 Jeanne: The sequel to FANTASTIC BEASTS AND WHERE TO FIND THEM —the second in a series of five — FANTASTIC BEASTS: THE CRIMES OF GRINDELWALD packs a lot into its lengthy runtime of 134 minutes. The ever-adorable Eddie Redmayne reprises his role as Newt Scamander, an employee of the British Ministry of Magic in the Beasts Division of the Department for the Regulation and Control of Magical Creatures, i.e. — he gets to play with all of the weird and wonderful beings that pop out of his suitcase.

Alas, poor Newt, in London 1927, has been denied the necessary documents for foreign travel by his brother, Theseus (Callum Turner) and others in high command at the British Ministry of Magic because he has refused to track down and kill Credence Barebone (Ezra Miller). If you recall, he’s the disturbed adopted child who wreaked havoc onNew York City in FANTASTIC BEASTS AND WHERE TO FND THEM, and is currently obsessed with finding his birth mother.

At Albus Dumbledore’s (Jude Law) behest, Newt and Jacob Kowalski (Dan Folger), Newt’s Muggle friend, escape to Paris. They are there to track down Gellert Grindelwald (Johnny Depp), who is residing in the City of Lights following his escape from MACUSA in New York. Grindelwald is plotting a new Wizarding World Order, which will subjugate all non-magicals in the world. Along again for this wild ride are sisters, Queenie (Alison Sudol) and Tina (Katherine Waterston) Goldstein, who add quite a bit of fun to the shenanigans.

Phew — as I stated, there is an awful lot going on in FANTASTIC BEASTS: THE CRIMES OF GRINDELWALD — almost too much. Normally, I don’t have many problems following multiple sub-plotlines, but I have to admit I was getting a tad confused in the middle of all of this. Poor David, he must have been totally in the dark — literally and figuratively — or sleeping. We’ll see when he writes his review. But, I digress —

FANTASTIC BEASTS: THE CRIMES OF GRINDELWALD is darkly, intensely entertaining. From the dramatic opening sequence of Grindelwald’s escape from NYC to the terrifying Romanesque coliseum ringed in fire, director David Yates has once again created, along with his exceptionally talented cast and crew, a vividly stark world where magic prevails and secrets are still looming.

Obviously, much of FANTASTIC BEASTS: THE CRIMES OF GRINDELWALD is a set-up for bigger and better things to come, but it still manages to delight and satisfy the fans of J.K. Rowling and her Harry Potter followers. There has been some grumbling about not enough magic in this installment, but, as a fan myself, I must disagree.

There are many scenes which bring back memories of Hogwarts — exactly when the audience finds themselves back at Hogwarts where young Professor Dumbledore is teaching. A particularly favorite scene of mine involves Newt, Tina and a pack of vicious dog-like creatures. So, trust me, there is plenty of excitement to please most of Rowling’s devotees.

Two things in FANTASTIC BEASTS: THE CRIMES OF GRINDELWALD really stayed with me. First is Zouwou — one of Newt’s magical beasts who resembles a Chinese dragon sporting a cat-like face. It’s one of those memorable creatures who could be rewarded with a spin-off of its own. The other remarkable feature of FANTASTIC BEASTS: THE CRIMES OF GRINDELWALD is the phenomenal soundtrack by James Newton Howard, who has won a Grammy, an Emmy and been nominated for eight Oscars.

I think it’s about time he actually won one.

David: The “HARRY POTTER” films have never intrigued me — here’s hoping my daughter will forgive me for that. So it’s no surprise that this second prequel entitled FANTASTIC BEASTS: THE CRIMES OF GRINDELWALD failed to excite me. Jeanne might say I slept through this picture and she would only be partially correct. It’s essentially a joyless story with only a smattering of humorous moments and not much in the way of suspense.

Most of the cast from the 2016 FANTASTIC BEASTS AND WHERE TO FIND THEM is intact. Johnny Depp (Grindelwald), Eddie Redmayne (Newt Scamander), Dan Fogler (Jacob Kowalski), Katherine Waterston (Tina Goldstein) and Alison Sudol (Queenie, Tina’s younger sister and the most interesting character) all return. An exception is Jude Law playing a young Albus Dumbledore, the character made famous in the Potter films by actors Richard Harris and Michael Gambon.

The opening sequence to this film is rather tense, largely due to the pulsating score by the great James Newton Howard, 8-time Academy Award nominee but not yet an Oscar winner. His music is a welcome accompaniment to the glorious cinematography by Oscar-winning FrenchmanPhilippe Rousselot. However, on the down side,FANTASTIC BEASTS: THE CRIMES OF GRINDELWALD employs the usual special effects we’ve all seen before.

Director David Yates, a veteran of “HARRY POTTER”, having helmed four movies in the franchise, has been announced as director for three more Fantastic Beasts movies — in 2020, 2022 and 2024. Can’t wait.

If you’re a J. K. Rowling follower, I suspect you will enjoy this second installment more than the casual moviegoer. I am not.