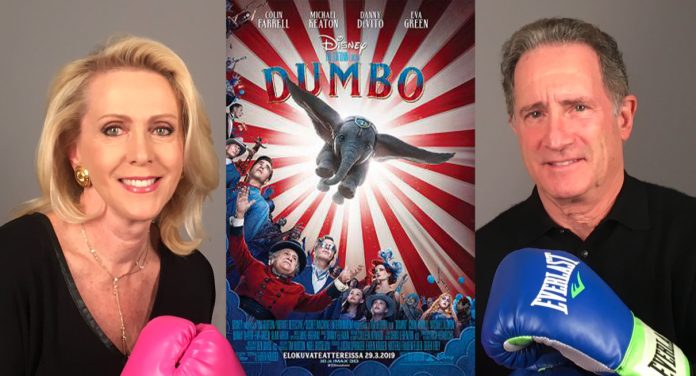 It’s Jeanne and David Kaplan of Kaplan vs Kaplan with the his and her movie reviews of the movie Dumbo by Tim Burton, starring Eva Green and Collin Farrell.

Jeanne: DUMBO is one of Walt Disney’s oldest and most beloved animated films. It was Walt Disney Studios’ fourth feature film, released in 1941, garnering an Academy Award for Best Music, Scoring of a Musical Picture (Best Original Soundtrack today). And it has always had the ability to make me cry — instantly — every time I remember the scene of the “mad” mother elephant, chained inside a dilapidated boxcar, cradling her new baby born with big ears, with her trunk, through the prison bars, as the song “Baby Mine” plays. It’s just one of those iconic scenes that stays with you.

Director Tim Burton’s live-action DUMBO has been in play for almost five years since screenwriter Ehren Kruger’s script came to the attention of producer Derek Frey, the head of Tim Burton Productions. Kruger realized he had to change and expand the original story for such a project, creating a host of new characters who are all affected by this adorable baby pachyderm with unusually large ears.

Max Medici (Danny DeVito), owner of the run-down Medici Bros. Circus, purchases a pregnant elephant, hoping that a new baby will kick start renewed interest in his failing show. Holt Farrier (Colin Farrell) has just returned from serving with the U.S. Army in WW I, but the once-renowned champion horse rider/roping star is now missing his left arm. And while he was away, his wife and partner has died, leaving him to parent his daughter, Millie (Nico Parker) and son, Joe (Finley Hobbins), alone.

Once the baby elephant is born and Medici stops freaking out over the size of his ears, he assigns Holt the task of caring for the newborn. Millie and Joe take it upon themselves to watch over the baby, and when a feather gets sucked into his trunk and he sneezes — then flies — the children cannot convince Holt. Much like the original version, when Medici uses the baby in his big-top show and the crowd inadvertently discovers his big ears, the ensuing bullying of the baby causes Mama, Mrs. Jumbo, to go ballistic. She ends up in much the same “prison”, only able to touch her baby through the bars with her trunk. And the sobbing begins —

The baby has now earned the moniker “Dumbo”, and Medici is selling his mother to recoup some of his loss. But Dumbo does become a big attraction — and why not? C’mon — a flying elephant? His newfound fame comes to the attention of V. A. Vandevere (Michael Keaton), a slimy con-man who already owns one of the biggest amusement parks called Dreamland. He offers Medici a partnership and all of Medici’s performers a job (wink, wink) in order to secure the rights to Dumbo.

His moll, a French performer named Colette Marchant (Eva Green), is an accomplished aerialist, whom Vandevere commands she ride Dumbo while he flies. Unbeknownst to all of the Medici troupe, and especially Dumbo, Mrs. Jumbo is part of Vandevere’s dangerous animal attraction at Dreamland. To reunite mother and son, everyone, except Vandevere and his cruel minions, comes together to orchestrate an elaborate and perilous plan.

None of this would have mattered if Dumbo, who is entirely CG created, along with his mom, isn’t so totally adorable. In every scene, I was struck by Dumbo’s incredibly sweet face and his BIG blue eyes. Visual effects supervisor, Richard Stammers, was well aware that Dumbo’s expressions — and his ability to connect with the other actors and the audience — were key to the film’s success.

None of the animals talk, unlike a few in the original, but that was a conscious decision. And six different versions of Dumbo were tried before they settled on the final one. To help with the interactions with the rest of the cast, especially the children, actor Edd Osmond dressed in a green suit to emulate Dumbo and become a physical presence.

I happen to be a huge fan of Tim Burton’s and his often-brilliant work, so I was very much anticipating his version of DUMBO — and I am thrilled. Without diminishing Disney’s original, Burton has stayed true to the message of embracing others who are different from us. Dumbo is quite the character and we fall in love with him immediately! I especiallylove the scene when he sucks up an entire trunk full of water, then hoses the obnoxious young bullies in the crowd at the circus who taunt and throw peanuts at him. Am I vindictive? You bet, specifically when it comes to bullying. Where is Melania when you need her? 🙁

The cast is superb. Farrell and Green are terrific, and obviously don’t seem to mind playing second fiddle to a CG elephant with impossibly large ears. Parker and Hobbins are precious, though their acting skills are perhaps a bit lacking. Keaton makes a marvelous villain — his maniacal tirade at the end of DUMBO is particularly unhinged a la someone else in a powerful position. And then Alan Arkin, who plays J. Griffin Remington, the banker who is poised to finance Vandevere, delivers one of the best lines of DUMBO when he declares the now-destroyed Dreamland a “disaster”, and walks off leaving the bereft Vandevere alone and broke.

My favorite performance — besides Dumbo, of course — comes from DeVito. It’s one of his best, he’s absolutely entertaining as Medici, going from a has-been ringmaster to a spiffy co-owner with nothing to do. But his scheming, conniving ways don’t hide the fact that deep down, all Medici wants is a successful circus to call his own — and to be able to take care of his circus family.

Like many of Burton’s productions, DUMBO is gorgeous to watch. The production designs by Rick Heinrichs, cinematography by Director of Photography Ben Davis, costumes by Colleen Atwood and music by Danny Elfman are all divine. There is one large production scene at Dreamland, besides the parade (which is awesome) that is is spectacular. It’s very reminiscent of the fabulous Busby Berkeley choreographies from the 30’s and the 40’s.

Burton’s lighting is purposeful. The Medici Bros. Circus in the beginning is drab and poorly lighted, Dreamland is intentionally dark — ominous. Then when we reach the end of DUMBO, the new and glorious Medici attraction is swathed in bright sunlight, connoting the happy conclusion. It’s all deliberate, adding to the overall experience of this beautiful tale.

I love DUMBO! It’s a powerful story of love — and not just the love of a mother and her offspring. Though, let’s face it — this baby elephant is MAGICAL! Don’t miss it — take your children! And if you don’t have kids — GO ANYWAY!

David: Within the first 30 seconds of watching DUMBO, I knew this was going to be a special movie. Director Tim Burton’s opening scenes, depicting the Medici Bros. circus train chugging from city to city before settling in Joplin, Missouri, are highly entertaining. Burton

never skimps on eye-catching detail, and with the cast he has assembled, the anticipation was high for a solid film.

Most importantly, the adorable baby elephant, Dumbo, CG created, is woven seamlessly with live actors. The result is a heartwarming, fun-for-the-whole-family outing. You WILL believe an elephant can fly!

Colin Farrell  plays a war hero/father/circus performer (Holt Farrier) who is initially reluctant to make waves. His deceased wife (we only see her in old photos) was a much stronger parent according to his daughter, Millie (Nico Parker, who looks like a very young Angelina Jolie). But when pushed to the limit, as when Dumbo’s mother is threatened with extinction by the nefarious and uber-wealthy V. A. Vandevere (Michael Keaton), Holt displays true grit and decisiveness.

When Holt returns from WW I with a missing left arm, he is greeted by his son Joe (Finley Hobbins) along with Millie. They are initially shocked by his appearance, but when the three embrace, it’s a very touching moment.

Danny DeVito as Max Medici makes the perfect ringmaster — no other actor could have made this role so convincing. He is irascible, but totally likeable.

The lovely Eva Green makes the most of her role as Colette Marchant, Vandevere’s trophy girlfriend. Green spent about five months working with professional aerialists and performs all her own stunts in the film, despite being terrified of heights. Alan Arkin has a small but pivotal role as a banker for Vandevere, who is considering an investment in Dumbo as a circus attraction.

DUMBO is simply a very sweet film. When Mrs. Jumbo and her baby elephant son are separated shortly after his birth, we maintain hope that they are eventually reunited. It’s impossible not to compare this part of the script with present-day events, but I digress —

The filmmakers have imbued Dumbo with wonderful facial expressions to complement his baby blue eyes. When Dumbo first takes flight in the movie, it is a magical sequence. Subsequent scenes, especially with Colette clinging to his back as they soar around the circus tent, are equally enthralling.

Burton always populates his films with interesting supporting characters, here a snake charmer, a strongman, etc. My favorite in this movie is the lonely, overweight mermaid (Sharon Rooney) who sings the iconic song “Baby Mine”. It was Oscar-nominated in the 1941 Disney animated version of DUMBO.

See DUMBO with your kids — or with anyone! If you remember the original Disney feature-length “cartoon”, you should still make time to see Tim Burton’s creation. He has made a familiar story seem new. And it has a lot to say about human nature and how we should treat not only defenseless animals, but each other, as well.