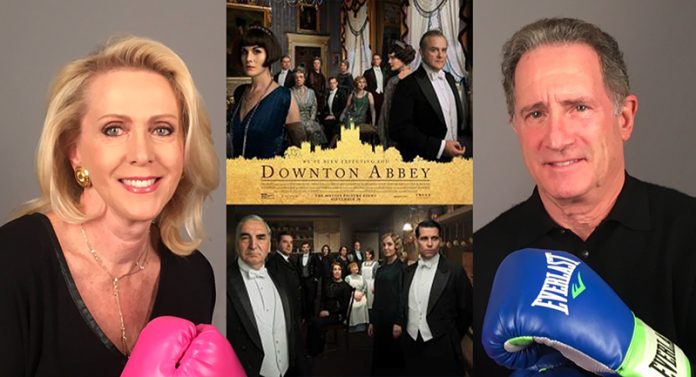 Jeanne and David Kaplan of Kaplan vs Kaplan, bring us the his and her movie reviews of the Downton Abbey movie. The film, starring Michelle Dockery, Maggie Smith, Hugh Bonneville, opened this weekend.

Jeanne: David and I were huge fans of the TV series, so we were obviously awaiting the release of DOWNTON ABBEY the movie. Our daughter and I are devoted Anglophiles, so when she was living in London, we toured Highclere Castle with a dearest friend where “Downton Abbey” is filmed. Every time I see that opening shot of the Great House through the trees down the driveway, I get the chills — and the movie does not disappoint.

The entire upstairs/downstairs cast is back with a few additions. Conceived by Academy Award-winner Julian Fellowes, who wrote the television drama series and has now penned the movie, and directed by Michael Engler, DOWNTON ABBEY places us back at the grand estate three years after the end of the TV run.

Lord Grantham Crawley (Hugh Bonneville) and Cora (Elizabeth McGovern) receive news that they are to host their Majesties King George V (Simon Jones) and Queen Mary (Geraldine James) for a day and a half, which includes a lavish dinner and an impressive parade. Lady Mary (Michelle Dockery) jumps into action, even asking retired Carson (Jim Carter) to come back for the duration, as she thinks Thomas Barrows (Robert James-Collier) isn’t up to the task.

To complicate matters, the Royal household travels with their own staff, including a snooty chef, Monsieur Courbet (Philippe Spall), which upsets poor Mrs. Patmore (Lesley Nicol) and Daisy (Sophie McShera) greatly. It’s their “house” and they want the opportunity to show off their culinary skills. And Mrs. Hughes (Phyllis Logan) is none too happy when the Queen’s head-of-household tries to take over her staff. But Anna (Joanne Froggatt) and Bates (Brendan Coyle) come up with a devious plan to thwart the Royals’ underlings.

Tom Branson (Allen Leech) is drawn into a nefarious plot by a visiting Irishman, and Thomas runs afoul of the law when he has a break in his service. And, as always, Violet Crawley (Maggie Smith) and Isobel Merton (Penelope Wilton) provide the much-appreciated one-line zingers.

It’s a glorious reunion of this outstanding cast. And, as I mentioned, there are a few new ensemble members, most notably Imelda Staunton as Maud Bagshaw, the Queen’s lady-in-waiting, and an estranged cousin to Violet. Tuppence Middleton plays Lucy Smith, Maud’s dresser, who harbors a secret of her own — and one that could affect the future of Downton Abbey.

DOWNTON ABBEY reminds us why we were all such fans of the series. Fellowes has maintained his splendid writing, although with Lady Mary and Lady Edith (Laura Carmichael) both married, there isn’t the opportunity for much scandal — yet. So, the screenplay boasts nothing terribly scandalous, but for me, the plot of the King and Queen’s visit provides enough of a storyline.

As one would expect, the costumes by Anna Robbins are divine, along with the makeup and hair by Anne Nosh Oldham. There is a ball at the palatial home, Harewood House, of the King and Queen’s daughter, Princess Mary (Kate Phillips), which is worth the price of a movie ticket alone. It is a sumptuous affair — the music is wonderful, the dancing is sublime, and the dresses are simply fabulous. I would kill for the one that Lady Mary wears!

Another fantastic scene is the parade which features The King’s Troop Royal Horse Artillery. Their current uniforms match the ones which would have been worn in the 1920s, so the 80+ troops on horseback are an amazing sight — and add such pomp and circumstance to DOWNTON ABBEY.

If you’re not a devotee, then you may not be able to relate. You can still see DOWNTON ABBEY, though, and enjoy it, trust me. But, for those of us who watched week after week, season after season, when that opening title theme score begins, I wanted to cry for joy. And — if you’re ever in England, make the trip to visit Highclere Castle, owned by the Earl and Countess of Carnavon — you will not be disappointed!

David: If you’re a devoted fan of “Downton Abbey” the TV show, then DOWNTON ABBEY the movie will be a feast for your eyes and ears. The superb writing, costuming, music, set design and most importantly, the incredible ensemble acting, should be savored like a sumptuous meal, one delicious bite after another.

Julian Fellowes, the show’s creator and brilliant writer has collaborated with American director Michael Engler to bring to the big screen virtually all the characters that people the world over loved and admired for six years on television. To a person, the original cast members expressed their sheer delight at reuniting with their fellow actors for the film.

So, this begs the question: will moviegoers who have never watched an episode of “Downton Abbey” enjoy the movie? With inhabitants of Downton Abbey anticipating a visit from The King and Queen of England, you don’t need prior knowledge of the wealthy Crawleys upstairs or the household staff downstairs to revel in this storyline.

DOWNTON ABBEY is a “fix” for those of us who watched the TV show ritually, looking forward to every episode as a special treat on Sunday nights. Every now and then at our screening I would glance over at Jeanne to my left and saw that she was smiling broadly, literally throughout the entire two hours. And, every time the castle was shown on screen, Jeanne would jab me in the ribs as a reminder that she and our daughter were there, at Highclere Castle, where it was filmed!

The ensemble cast should be recognized for their exceptional achievements both on TV and the big screen. For me, the lead actors are Hugh Bonneville (Robert Crawley), Elizabeth McGovern (Cora Crawley) and Michelle Dockery (Lady Mary). Watching them perform is akin to seeing old friends again. There is something very comforting about that.

New to the movie are Simon Jones and Geraldine James as King George V and Queen Mary. You willbelieve the heads of British royalty are at Downton. Also, David Haig plays their head of staff, an arrogant, snobby SOB who, of course, rubs Carson the wrong way. And the wonderful Imelda Staunton joins the ensemble as Lady Bagshaw, the Queen’s lady-in-waiting, at odds with Violet. One interesting trivia note for fans: Staunton has been married to Jim Carter (Carson) for 35 years.

Much of the fun of DOWNTON ABBEY are the clashes between Downton’s regular staff and the Royal staff who try to assume their duties. Mrs. Patmore, the Crawley’s head cook, was so looking forward to preparing a meal for the King and Queen, but will she get the opportunity? The Royals also bring their own footman, butler and all the other assorted help, much to the chagrin of the Crawley staff. Another standout on the Royal side is Philippe Spall as their French chef Monsieur Courbet — he is a hoot.

It should be noted that Engler has enjoyed extensive success as director of such iconic American TV programs as “Sex and the City”, “Six Feet Under”, “30 Rock” and more recently, “Unbreakable Kimmy Schmidt”. Thus, there is no doubt that the DOWNTON ABBEY revival was in good hands. As for Fellowes, he is a past Oscar winner for the original screenplay of GOSFORD PARK (2002).

Perhaps Ms. Logan (Mrs. Hughes) summed this project up best. When interviewed, she noted that “you have all these wonderful ingredients to make the perfect cake and the master chef, Julian Fellowes, mixed it up, put it in the oven, and here it is, the most beautiful Victoria sponge!”