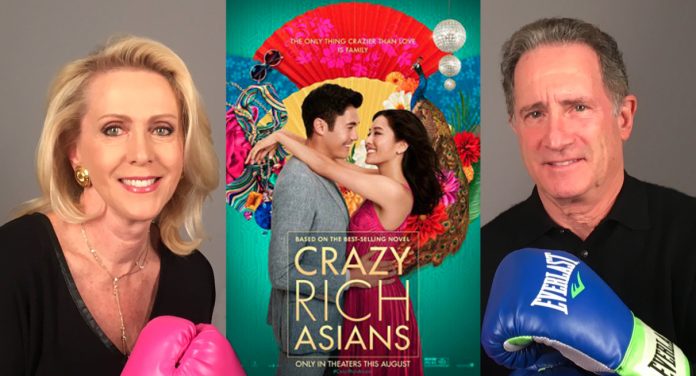 Jeanne: Based on Kevin Kwan’s 2013 popular novel of  the same name, CRAZY RICH ASIANS chronicles the relationship of Chinese-American Rachel Chu (Constance Wu), an economics professor at NYU, and Nick Young (Henry Golding). They have been dating for over a year, but Rachel has no clue about Nick’s family background.

When Nick must travel to Singapore to be best man at his closest friend’s wedding, he asks Rachel to accompany him. Upon arriving in Singapore, she first visits her old college roommate, Goh Piek Lin (Awkwafina) and her over-the-top family. They are the ones who break it to Rachel just exactly who her boyfriend really is and how incredibly wealthy.

As these stories go, when Rachel finally meets Nick’s mother, Eleanor Sung-Young (Michelle Yeoh), it does not go well. Eleanor takes an instant disliking to poor Rachel and seemingly no matter what she does to get in her good graces, Rachel fails to win her over.

CRAZY RICH ASIANS is a whirlwind of delight — attractive actors, stunning couture, spectacular sets and outrageous parties. It’s a feast for the eyes. But what really makes this dramedy work is the acting.

Had Wu and Golding not clicked as a couple, CRAZY RICH ASIANS would have failed, despite all of the glitz and glamour. Their chemistry — so important — is charming and utterly believable. They are absolutely darling — especially Wu.

And the remaining cast is superb. The ethereal Yeoh plays the powerful mother with a deft touch — never overbearing. Her scenes crackle with intensity. The gorgeous Gemma Chan plays Astrid Leong-Teo, Nick’s married cousin who has a penchant for expensive jewelry, shoes, etc. Astrid is pivotal as she is about the only one of Nick’s relatives and friends who is kind to Rachel.

Awkwafina is perfectly cast as the nutty roommate with the hilarious family. She and Nico Santos, who plays Oliver T’Sien, Nick’s second cousin, provide the necessary hilarity in CRAZY RICH ASIANS. Oliver is to Rachel who Anthony was to Charlotte in “Sex and the City”.

Truthfully, I was not expecting CRAZY RICH ASIANS to be quite as entertaining as it is. It’s the first major film in 25 years, since JOY LUCK CLUB, to focus on Asians. Here’s hoping with the success of CRAZY RICH ASIANS it won’t be another twenty-five.

David: The familiar theme of a significant other meeting relatives of the partner is given a fresh makeover in CRAZY RICH ASIANS. Set primarily in Singapore, the storyline pits some members of an uber-wealthy Chinese family against one middle class Chinese-American girl. The film is both funny and dramatic, so it’s not played strictly for laughs. Writers Peter Chiarelli (“The Proposal”) and Adele Lim adapted their screenplay from Kevin Kwan’s novel of the same name.

It works primarily because the love-struck couple has genuine chemistry. Rachel Chu, a brilliant and beautiful college professor of economics at NYU (Constance Wu) and Nick Young, a handsome Oxford history professor (Henry Golding), have dated for about a year, so Nick decides he wants Rachel to accompany him from New York to Singapore for his best friend’s wedding. Rachel has no clue that her boyfriend, along with everyone he knows, comes from M-O-N-E-Y. Example: one relative, cousin Astrid (Gemma Chan), plunks down $1.2 million for a pair of earrings. We learn later she also owns 14 apartment buildings. But, as Jeanne would say, I digress —

Since Nick has been away from his family for a long time, his mother Eleanor (veteran actressMichelle Yeoh) blames Rachel, and it gets much worse from there. Eleanor tends to smile through her distaste for people she doesn’t approve of, so who knows what she’s really thinking?

There are many reasons to like CRAZY RICH ASIANS. The cinematography is splendid —Singapore, and especially its culinary offerings, looks very inviting. Then there are the comedic performances from the always dependable Ken Jeong and from The Daily Show regular Ronnie Chieng — although he plays a crude SOB here. But one actor steals the show, namely Awkwafina as Rachel’s college roommate Goh Peik Lin. She is a stitch, and even more importantly, she is a great comfort to Rachel when it is most needed.

Wu and Golding are outstanding. Wu, in particular, exhibits a wide range of emotions playing Rachel and we not only believe her, we feel her joy and her pain. As for Golding, this is his movie debut, but you wouldn’t know it — he’s a natural. The duo makes a wonderful couple on screen.

Native Californian and USC grad Jon M. Chu, discovered by Steven Spielberg, directs. In addition to keeping the story moving briskly, he infuses some unique special effects artistry to the opening scenes and closing credits. I also loved the insertion of an absolutely fabulous female torch singer during the wedding reception.

A bit of trivia: CRAZY RICH ASIANS is the first film by a major Hollywood studio to feature Asian-Americans in the leading roles since THE JOY LUCK CLUB (1993). Judging by the enthusiastic viewers in our screening audience, expect some sort of a sequel, and it won’t take another 25 years.