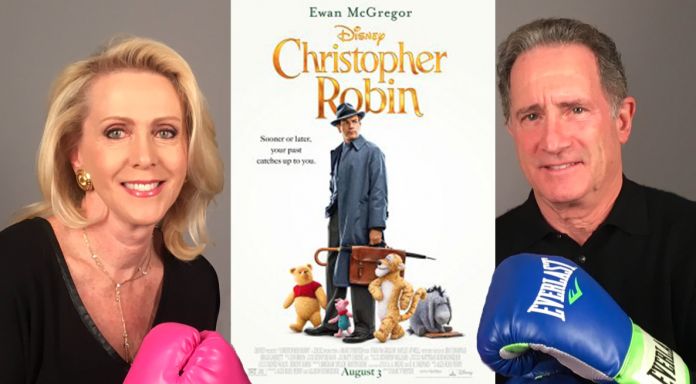 Jeanne: An idea 15 years in the making, CHRISTOPHER ROBIN presents us with the little boy we know from A.A. Milne’s beloved stories, now all grown up. He has long forgotten his best friends from the Hundred Acre Wood, Tigger, Eeyore, Piglet and especially Winnie the Pooh, and now he finds himself facing the stresses of adulthood at home and at work.

Though he no longer thinks of them, Pooh, Piglet and the others remember Christopher Robin often. On a very dismal day in the Hundred Acre Wood, when Pooh cannot find his friends in the fog, he crawls through a tree and magically appears in the park across from Robin’s home in London.

Desperately needing to finish his project — to save his job — Robin’s hidden feelings for his silly old bear resurface and he agrees to help Pooh find the others. A lovely reunion is cut short when Robin realizes he can’t miss his important meeting with his most important papers. Unfortunately, Tigger has replaced the documents in his briefcase with Hundred Acre Wood memorabilia, and now it is up to Pooh and the gang — along with Madeline — to get these papers to Robin in London.

Anyone who has ever read and loved “Winnie-the-Pooh” by A.A. Milne, first published in 1926 with the classic illustrations by E. H. Shepard, will LOVE CHRISTOPHER ROBIN. Milne’s follow-up publication “The House at Pooh Corner” in 1928 ends with Christopher Robin explaining to Pooh that he must leave because he’s going away to boarding school. And this is how CHRISTOPHER ROBIN begins.

It’s all so incredibly endearing and immensely engaging. Director Marc Forster and his cast and crew have brought these wonderful characters to life in such a marvelous way. Pooh, especially, is so lifelike, never more so than when he’s licking honey off a plate in Robin’s kitchen. There is honey all over — on his cheeks and mouth, his nose, his paws — and it’s so delightful as he leaves sticky paw prints everywhere. And if your heart doesn’t melt when Robin tucks Pooh to sleep in his daughter’s empty bed — well, you’re not human.

We have a running joke in our little family about David’s inability to stay quiet. Our daughter loves to tease him with the line from THE DEVIL WEARS PRADA, which has Emily Blunt using her hand to explain to Anne Hathaway that “I’m hearing this and I want to hear this”. Since our daughter was with us at the screening of CHRISTOPHER ROBIN, it was quite hilarious for the two of us — David, not so much — when Robin can’t get Pooh to stop talking when they’re out in public in London.

McGregor is the perfect adult Christopher Robin. He exudes all of the expected mannerisms of a sweet little boy who has grown into a very serious adult who no longer has fun. And when Pooh reawakens those lost feelings, McGregor is equally adept at displaying the joy in finding happiness again. The scruffy old bear and Robin sitting on their thinking log “Doing Nothing” which, according to Pooh “often leads to the Very Best Kind of Something” is beyond priceless.

While reading the production notes, I learned something new. Jim Cummings, who has voiced Winnie the Pooh and Tigger for the past 30 years, was born and raised in my hometown, Youngstown, Ohio. He has voiced many Disney characters, but Pooh and Tigger are, in my opinion, his best. It is so comforting to recognize his voice. Alas, I cannot say the same for Brad Garrett, who voices Eeyore and Nick Mohammed who does Piglet. I have always adored Eeyore’s moody monotone, but I found Garrett, along with Mohammed, incredibly disappointing. This is my only complaint with CHRISTOPHER ROBIN.

Forster has stated that he believes this story has never been more relevant. “We could all use a little bit of Pooh’s heart and wisdom right now.” I couldn’t agree more! If you have ever been a Winnie the Pooh fan, you simply MUST see CHRISTOPHER ROBIN — it’s uplifting and enchanting! And make sure you stay for the final credits to see two special songs by songwriter and Disney legend Richard Sherman.

David: Winnie the Pooh tends to denigrate himself as just a “bear with very little brain”, but those who have followed the “hunny” loving ursine through the years know that simply is not true. The loveable Pooh, voiced for over 30 years by Ohio native Jim Cummings — who has also voiced Tigger over that time — is as smart as any stuffed animal. Oops, he’s not really stuffed. He’s a “live” denizen of the Hundred Acre Wood, along with his pals, Tigger, Eeyore, Piglet, Owl, Rabbit, Kanga and Roo.

Through the magic of movies, A.A. Milne’s characters, which he created in 1924, come to life in the live action CHRISTOPHER ROBIN. The actors providing the voice talents are mostly exceptional, but it is the singularly spectacular performance by Ewan McGregor, as the adult Christopher Robin, who is the central force in director Marc Forster’s captivating film.

In his personal life, McGregor is a goodwill ambassador for UNICEF, the long-time organization whose acronym means United Nations International Children’s Emergency Fund. So it’s no wonder that the veteran actor was selected for the role of the adult Christopher. In CHRISTOPHER ROBIN, McGregor shines as the overwrought father of young Madeline (the terrific Bronte Carmichael) and the desperate husband of Evelyn (the equally fine Hayley Atwell). Christopher is desperate because his job as efficiency manager at Winslow Luggage is in jeopardy, and his relationship with his wife and daughter suffers accordingly.

This career strife sets up a rather tense last half of the movie as Pooh and the rest wage a race against time to get Christopher his lost papers which promise to bail his company out of a major jam, therein possibly saving his job. Tension? In a movie about Winnie the Pooh? Improbably, the answer is unequivocally yes! And McGregor’s spontaneous thrashing of the dreaded Heffalump to “rescue” his pals? A marvelous bit of filmmaking!

CHRISTOPHER ROBIN is partly an homage to the father-daughter dynamic, which likely explains why I gave my daughter, who accompanied us to the screening, a hug as the final credits rolled. And speaking of the final credits, make sure you stick around because there is faux archival footage of Disney’s two-time Oscar-winning composer Richard Sherman playing a piano and singing “Busy Doing Nothing” and “Christopher Robin” — on a beach!

It’s a cliche, but I found myself smiling broadly throughout most of the movie, except when a tear happened to well up in my eyes. Kudos to Oscar-winning writer Tom McCarthy (SPOTLIGHT), one of five who wrote the story and screenplay. McCarthy’s previous credits include one of Jeanne’s all-time favorites, THE STATION AGENT, as well as THE VISITOR, WIN-WIN and UP.

CHRISTOPHER ROBIN is simply the perfect movie, entertaining for the whole family. It’s a film with as much heart as Pooh Bear, accompanied by a wonderful score from Jon Brion and Geoff Zanelli. Not to be missed.